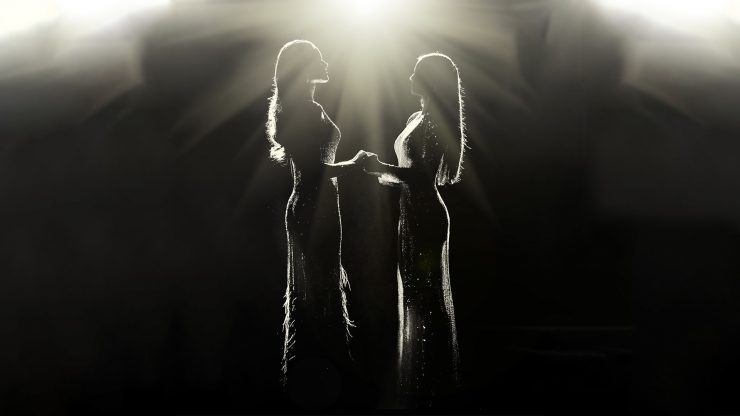 Beauty, not physical strength or mental power or any other value, is the insecurity. It explains why many embraced R’Bonney Gabriel’s victory as a Filipino triumph, too.

The reigning Miss USA Universe is half-Filipino. Miss Spain Universe is not, but she speaks good Tagalog and considers herself a Filipino by heart after living in the Philippines for three years to take up acting lessons and work as an international model. Someone on Twitter remarked, “Is this reverse colonization?”

That’s one of the best jokes to come out of the 2022 pageant season. But it’s not all just funny. By bringing up the issue of colonization, the joke actually touches on one of the biggest answers to the oft-asked question of why Pinoys are obsessed with beauty pageants.

Yes, it has a lot to do with looks (“beauty of face and body” in pageant lingo). But it’s not just skin deep. It takes root in the Filipino psyche formed by 400 years of imperialist foreign rule.

For centuries we were deemed second-class citizens in our own country. Looked down upon by the ruling class of conquistadors from Spain as primitive at best and savage at worst. Monkeys, we were often referred to, even by our so-called “liberators,” the Americans. In fact, some of the earliest “international pageants” Filipinos became part of were world exhibitions or expositions in the first half of the 20th century in Western countries such as Paris, Barcelona, London, and New York City where indigenous peoples from Asia, Africa, and Latin America were kept in enclosures or cages as display for guests to look at, feel sorry for, or laugh and jeer at. These events were often referred to as “human zoos.” Want receipts? Look here.

The attraction for the Westerners was the wildly “exotic” looks of the natives—the brown skin, the short or flat nose, the bushy, curly hair, the small frame. They were as far removed geographically and physically from them. And because they were from far-off lands seen as mostly untouched by modernization, the human “animals” inside the cages were thought to be wild, untamed.

An unverified story about the 1969 Miss Universe pageant has Gloria Diaz, the Philippine candidate, being asked by a judge during the preliminary interview this thinly veiled racist question: “Is it true that you Filipinos use your hands to eat?” There goes the monkey reference. Showing sharp smarts and quick wit, the diminutive Gloria allegedly replied, “Why? Do you use your feet?” If the story is true, then the answer was a glorious and monumental clapback at a time such clapbacks weren’t in vogue yet. Even if it wasn’t true, the diminutive Filipina stood tall with her equally smart onstage answers during the televised finals.

Asked by host Bob Barker to name all her eight siblings, she retorted with a question of her own—how would he want her to name them, alphabetically or by rank (presumably she meant age)—before proceeding to name them, randomly. For the final Q&A among the Top 5, the common question was about man’s landing on the moon, a highly anticipated global event scheduled to take place the very next day: “If a man from the moon landed in your hometown, what would you do to entertain him?” Without skipping a heartbeat, the dusky 18-year-old said, “Oh, the same things I do. I think if he has been on the moon for so long, I think when he comes over, he wants to change, I guess.” The news headlines then framed the Miss Universe result along the lines of “As man conquers the moon, the Philippines conquered the Universe.”

Five years later, a different but familiar conquest narrative emerged at the 1974 Miss Universe pageant. It was the year the country’s second titleholder, Margie Moran, who won in Greece in 1973, relinquished the crown to her successor. The event was held in the Philippines for the first time in the pageant’s 23-year history. Among the year’s 65 delegates, the queen named Amparo Munoz emerged as the last woman standing—or to be more precise, seated on the queen’s rattan throne with the Miss Universe crown firmly resting on her head. She was Miss Spain. Almost one hundred years after being expelled from the country, the former Philippine colonial ruler conquered the Philippines again. That’s the big ironic story of the 1974 Miss Universe pageant that has somehow escaped many pageant enthusiasts including experts and historians.

The baggage of a scarred psyche from centuries of being told repeatedly, some with physical violence to boot, that we were ugly primitives and therefore colossally inferior to people beyond our waters, especially the fair-skinned, long-nosed, tall Western modern urbanites with sophisticated behavior, cannot be erased with two almost back-to-back victories on the pageant stage four years apart. Nor with a world-celebrated unbroken streak of semi final placements including 10 Top 10s with and two wins in Miss Universe in the last dozen years, from 2010 to 2022, that catapulted the country to pageant powerhouse status. Winning validates us and makes us feel seen, celebrated, worthy. It explains why many embraced R’Bonney Gabriel’s victory as a Filipino triumph, too. It’s why we continue to be obsessed with beauty pageants on a level that’s not seen in sports and other kinds of international competitions. Beauty, not physical strength or mental power or any other value, is the insecurity.

That’s a lasting vestige of colonization that may never truly go away even if we, by some inexplicable force or alignment of stars, win all the crowns in the world—the universe, rather—in the next 400 years.