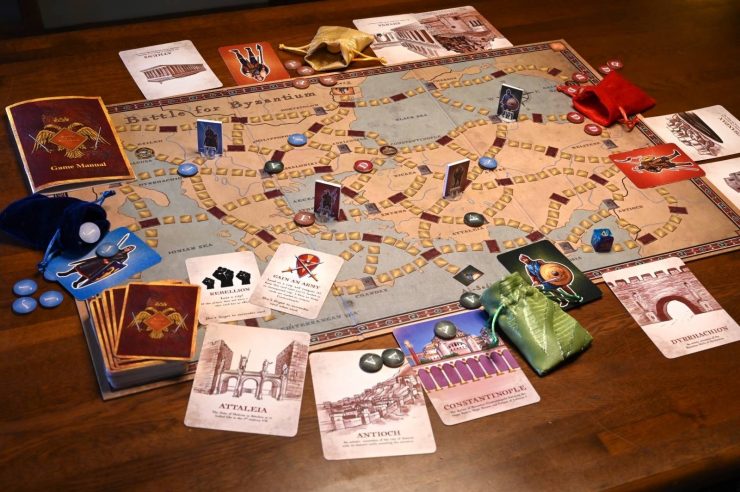 Battle for Byzantium, which has an international team of artists behind it, is set to be released this year.

When it comes to ancient civilizations, the Byzantine Empire isn’t exactly the first thing you think of. But who could blame anyone?

Across television, in the movies, and over the streaming sites, there’s hardly anything on it. Apart, of course, from documentaries and older films. Some of the most famous sword and sandal movies—like Ridley Scott’s Gladiator—mostly take place in the Western Roman Empire.

And if you were sleeping in history class when this came up, here’s a bit of a refresher. The Byzantine Empire—also called the Eastern Roman Empire or Byzantium—was the continuation of the Roman Empire after its fall in the fifth century. And while it later succumbed to the Ottoman Empire toward the end, the Byzantine Empire lasted for more than a thousand years. The lack of popularity, then, seems completely surprising.

But artist and game designer Powee Celdran is set on changing that. His upcoming debut game—Battle for Byzantium—is a historical tour of the Byzantine Empire. Only, by way of swords, armies, and Greek Fire. Somewhat like a sword and sandal movie on the table.

“The game ‘Battle for Byzantium’ is set in the year 1025 AD in the aftermath of the death of the great emperor Basil II,” Powee explains. “Featuring 18 Byzantine cities on the map, the objective of the game is for the players to capture the most number of cities using the roll of the dice to advance and the relevant game cards to conquer one city after another.”

“The idea for the game began in 2019 when I found myself immersed in the rich and colorful history of the Byzantine Empire after reading about the Eastern Romans and traveling to some of their historic cities in Europe,” he continues.

Some of those travels included trips to Turkey, Greece, Italy, Russia and the Balkans—places that belonged to or were heavily influence by the Byzantine Empire. These travels also led him to read books, browse through sites, and join online communities, where he would later meet some people who would collaborate with him on the game. He also began traveling around the world to go to museums and other places that held artifacts and manuscripts from the Byzantine Empire. And just last summer, he took a short course on the subject at Oxford University.

So, with all the knowledge running around in his head, he began creating content on social media and Youtube, and even ran a blog about the empire. But finally, he decided to put everything to paper (and cardboard). And that’s what we have right now.

In Battle for Byzantium, Basil II’s younger brother—Constantine VIII—is deemed unfit to rule the empire. Players then take on the role of four opportunistic commanders who refuse to recognize Constantine VIII’s authority, and aim to conquer the great cities for themselves, including the capital, Constantinople.

It’s a bit of historical fan fiction. Constantine VIII actually ruled until his death in real life. He was, however, largely considered incompetent and cruel, so it isn’t really much of a stretch.

The game is light on rules—you roll dice to move, gather your armies, and play cards to create effects to help you capture cities and mess with the progress your opponents. The “Plague” card, for example, sends a player to the corner of the map and makes them miss a turn, while “Sack a City” essentially lets you steal one from another player.  It plays relatively  fast and intuitively, and there’s hardly any learning curve, making it a good entry into the board gaming world.

But aside from the story and theme, the game’s attention to detail is what makes it stand out. The map is a historically accurate recreation of the Byzantine Empire in the 11th century, with 18 cities depicted on it. The narrative is well crafted and draws you in, while the game cards feature original art and actual bits of history on it.

No prior knowledge of the Byzantine Empire is required to enjoy it, though. There’s no gatekeeping here—aside from when you rattle the gates of Constantinople, which is very difficult to capture in the game.

And with all that said, the art is just fantastic. Under Powee’s direction, it’s been created by an international team of artists who, like him, are immersed in Byzantine history. Chrysa Sakel, the lead artist, is based in Athens and specializes in Byzantine-themed art, with a number of graphic novels under her belt. Alessia Hilary Valastro—an Italian artist based in Sicily—designed and illustrated the game map and symbols. Arjun Altomonte,  from the Philippines, designed the box cover and game logo.

That’s quite a cast right there, but Powee also mentions that content creators, friends, classmates, and even family all pitched in to make the game more alive—contributing facts, tips, and historical resources to help him out. But what makes the Byzantine Empire so interesting, really?

“It is the world’s longest-lived empire, more than a thousand years!” Powee says. “This is a major achievement considering it was surrounded and threatened, even invaded, by other global empires yet still managed to outlast most of them. In its 1,123 years of existence ,the empire saw its fortunes rise and fall numerous times like a roller coaster, with numerous golden ages followed by those of near collapse,” Powee explains.

“Through it all were the 93 fascinating and often controversial emperors and empresses who presided over the empire plus the countless generals, religious leaders, and the great number of writers, politicians, and ordinary folk whose stories make up the mosaic of what we now know as Byzantium.”

“I chose the board game format because I think a great way to bring Byzantine history to life is through the fun, interactive and visually exciting and three dimensional experience a board game delivers,” Powee answers. “Hopefully, as players are introduced to the game’s Byzantine cities, characters, weapons and other historical features they will want to dive deeper into understanding the empire, maybe research or join groups online like I did, or travel to that part of the empire today.”

“On a personal level, I chose a board game format as I always wanted to make something much bigger out of my passion for Byzantine history and to share it to the world by having people enjoy what I also enjoy. And it’s great to see my name on a game, right?”

Well, he’s not wrong there. But aside from having his name on a board game, Powee also has another recent release that has his name on it.

Ayala Museum is currently selling a deck of playing cards featuring Powee’s art. Which, as you might have already guessed, is also Byzantine-themed.

Could the Byzantine Empire be the next vikings? Will it be as popular? We’ll have to see. At this point, the sword and sandal genre could use a bit more variety, though. And if Powee Celdran has anything to say about it, and games like these catch on, we might just see more of Byzantium on the screens. You can hop into the internet right now and discover all of this for yourself. Trust me, it’s a rabbit hole. But it might just be one you want to fall into.