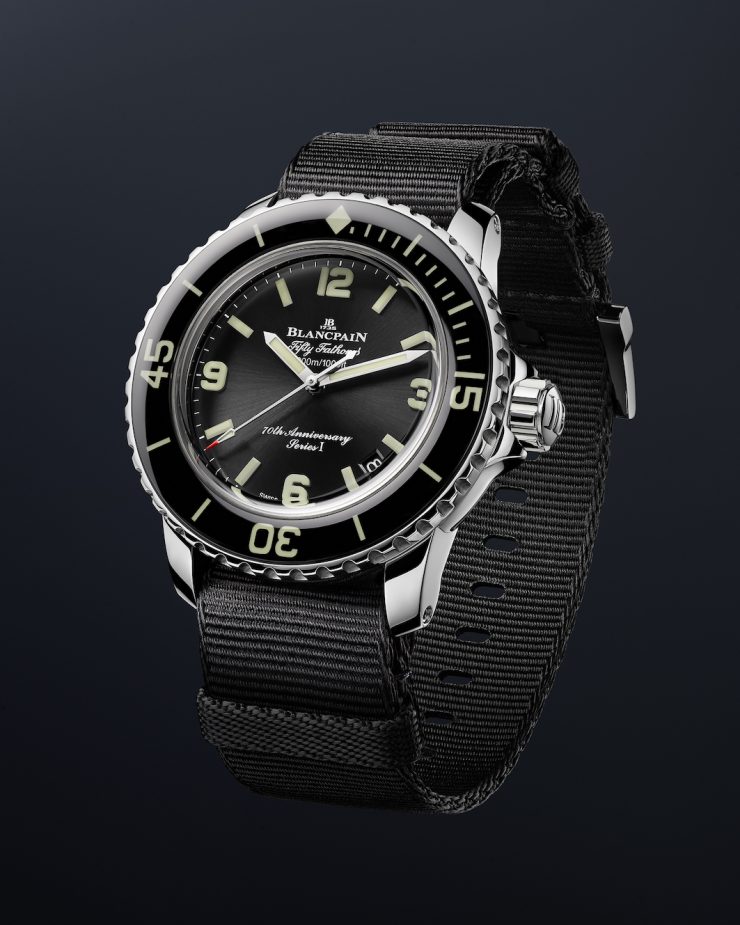 In 1953, the world’s first professional dive watch was released. And it set the benchmark for all the dive watches that followed.

As with many iconic tool watches of today—like the Tudor Black Bay Fifty-Eight Navy Blue and the Omega Seamaster 300m—the Blancpain Fifty Fathoms has quite a military history. And it’s one that began in 1952.

Back then, the French Navy needed a tool watch that could survive marine combat conditions but would still be legible underwater. But more importantly, the watch needed to be water-resistant for up to 300 feet.

The French Navy’s Captain Robert Maloubier and Lieutenant Claude Riffaud set out to find a watchmaker that would be up to the task. Their search led them to Blancpain, whose CEO—Jean-Jacques Fiechter—was known to be a diver, and could understand what they needed.

The watch they came up with was the Fifty Fathoms: the first professional dive watch ever made. It had a rotating bezel that could track how long divers spent underwater, a luminous dial that made it easier to read in the dark, and was on the larger side at 42mm. Released in 1953 and issued to the French Navy’s divers for use, the Fifty Fathoms marked an important part of watchmaking history.

The watch helped set the tone for the rest of the 1950s, and dive watches soon started appearing on the market (including the Rolex Submariner in 1954). Even now, these mid-century dive watches still influence the look of modern models.

This year, the Fifty Fathoms celebrates its 70th anniversary with a special model that pays tribute to the original.

With a 42mm case in stanless steel, this piece brings the Fifty Fathoms back to the same size that Fiechter and the French Navy originally intended (more recent ones have come in 45mm and 40mm cases). It also has a black sunburst dial with luminescent hands and block-type hour-markers, so the whole piece looks straight out of the fifties.

Looking at the back, the rotor is made out of platinum (the traditional metal for a 70th anniversary), and the see-through case back lets you take a look at Blancpain’s automatic Calibre 1315. It’s water-resistant to 1000 ft—more than three times resistance of the original—which tells you just how far along watchmaking has come since the fifties.

The watch will be released in three series of 70 pieces each, for a total of only 210 watches. Each series will be available to specific markets: 70 for EMEA (Europe, the Middle East and Africa), 70 for Asia-Pacific, and 70 for the Americas,

This is probably as close as you’ll get to the first runs of the Fifty Fathoms, and will likely be on grail lists already. And while we all wait for the first models to come out of the workshops, we can watch the two-part documentary about the Fifty Fathoms below.