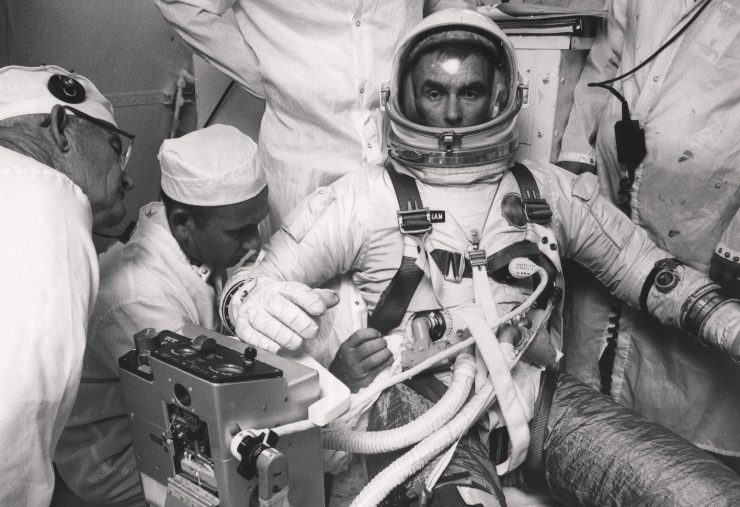 This year marks the 50th anniversary of the Apollo 17 mission.

50 years ago, NASA launched the Apollo 17 mission—the last manned journey to the moon. It was poignant moment, being the final stage of a searing chapter of space exploration. The whole series of missions is still known across the world as one of greatest achievements of humankind. And it was one that saw man’s first steps on the lunar surface and even a disaster in space.

Using technology that your average modern smartphone could likely drink under the table, the Apollo program used the knowledge of the time to do what was previously thought impossible.  And that, of course, deserves more than its fair share of credit.

Omega—the official watch of the NASA astronauts—is paying particular attention to the achievements of Apollo 17, and the role that the Speedmaster Moonwatch played during those famous hours.

The mission was led by Commander Eugene Cernan, alongside Lunar Module Pilot Harrison Schmitt,and Command Module Pilot Ronald Evans. The Apollo 17 landed on the moon on December 11th, 1972 at 19:54.58 GMT. Its mission was to conduct a thorough exploration of the moon: more than what the previous Apollo missions had already done.

Before passing away in 2017, Commander Cernan remained a close friend of OMEGA, appearing at multiple events and celebrations across the years. Cernan spoke highly of the Speedmaster that he had worn during his turn as an astronaut, even once saying:  “That’s the commitment of your people at Omega, to make the finest watch piece, not only in the world, but in the entire universe.”

That’s some high praise right there. But for a watch that’s been to arguably the highest place a watch could go, it seems about right.

Cernan’s Apollo 17 watch (ST 105.003) is still on display at the Omega Museum in Biel, Switzerland and was used by OMEGA in 2019 to recreate the legendary Calibre 321. Using “tomography” technology, the Omega team were able to look inside the timepiece to determine the exact specifications for the movement’s reconstruction.

Raynald Aeschlimann, President and CEO of OMEGA, says, “The Apollo 17 astronauts stayed on the moon’s surface for approximately 75 hours, yet all these years later, their achievements are still fondly remembered by OMEGA. This was the sixth time in history that our Speedmaster was worn on the moon, and the final milestone of our incredible lunar story.”

Being the watch that was worn by the last man to walk on the moon, it’s just as important as the ones that  were worn on the Apollo 11 mission—where Buzz Aldrin took the Moonwatch for a spin on the surface. And you can bet that when mankind sets foot on the moon again (or on Mars, for that matter) there’s going to be a Speedmaster involved.