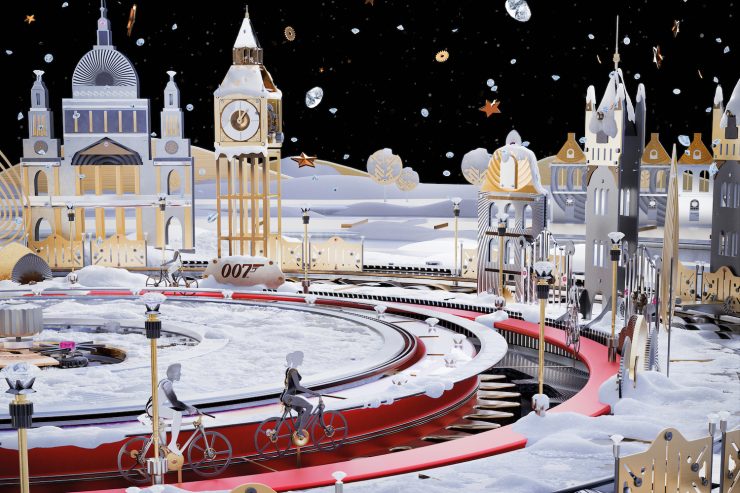 Remember Omega’s watch-scapes from earlier in the year? They’re back. And this time, they’re all snowed out for the season.

Back in April, Omega debuted a series of images and videos called watch-scapes. These visuals fancifully recreated Omega’s watch movements as dream-like worlds, which translated them into scaled-down figures and iconic objects set against surreal backdrops.

Each watch-scape told a story that’s uniquely tied to Omega, including the moon landings, deep-sea adventures, sports timekeeping. Even Snoopy made an appearance, since the famous cartoon beagle has links to the Omega Speedmaster and the safe return of the Apollo 13 astronauts from a catastrophe in space.

Well, the watch-scapes are back. And this time, they’re all decked out in red, white, and gold. There’s also quite a bit of snow to match the festive season.

Looking at them sclosely, you can spot some of the key Omega icons in these little dream-like worlds. And if you’re interested in playing a bit of a scavenger hunt, you look for James Bond, references to deep-sea diving, the moon landings, and plenty of other little details that tie in to the Omega universe.

Right beside these details is a selection of Omega watches: the new De Ville Prestige Third Generation collection; the Constellation and the Trésor; and omega’s icons such as the Speedmaster Moonwatch, the Seamaster Diver 300M, and the Seamaster Aqua Terra.

If you’ve been an Omega fan for a while, it’s easy to get lost into these dream worlds. But if nothing else, they’re pretty little things to stare at while you count the days down to Christmas.

Check out the video below to see the watch-scape in motion: