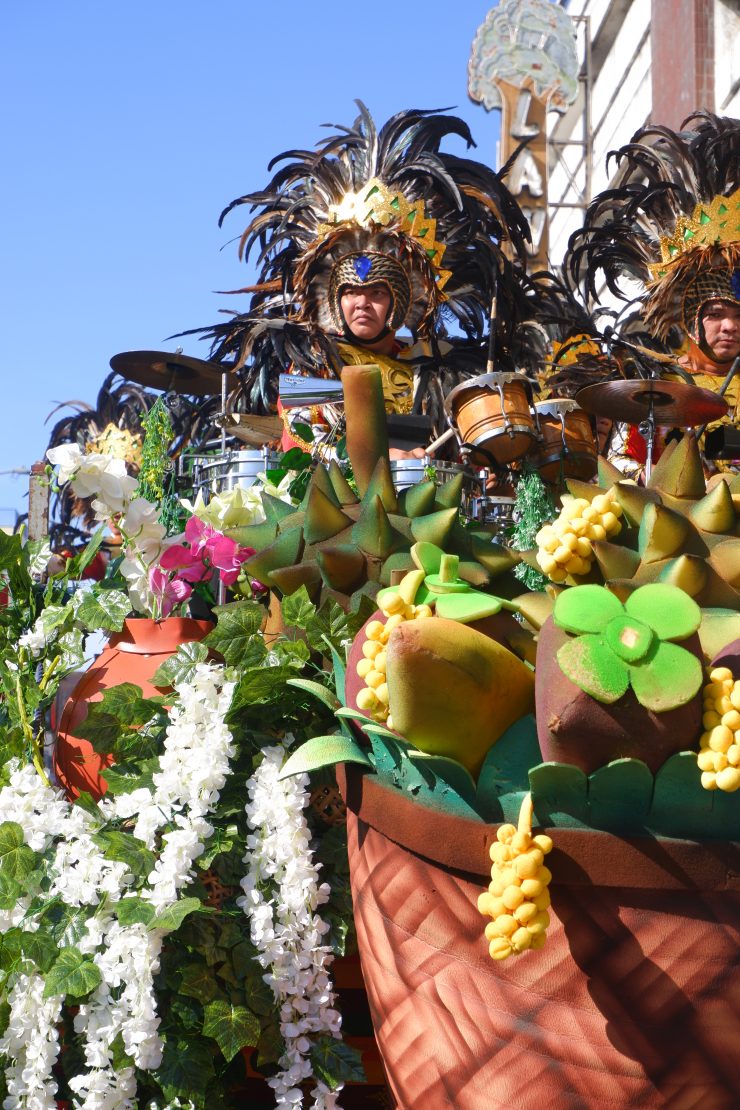 MANTLE goes on a rollercoaster experience in the King City of the South—mishaps and miracles included.

This story is the second part of a two-part travel feature on Davao. If you haven’t read the first one, you may check out the story through the link below.

Much had already happened on our Davao trip even before the main festivities took place. My encounter with durian taho had ranked highly in my list of memorable experiences, but I knew that was just the tip of the iceberg.

After spending time getting some peace of mind while walking around Davao at night (see the previous story to recount how quiet the Poblacion District was), we barely got any sleep before waking up at sunrise for the main event: the Pamulak and Pitik sa Kadayawan, the much-awaited flower and drum float parade.

I wasn’t expecting the morning to be the most adrenaline-filled three hours of my working life.

Let’s get back to my travel musings on Davao:

It’s impossible to choose a favorite float in the street parade, so just enjoy all of them.

The parade is also a competition. The floats are distributed among various categories:  the Dako (big) and Gamay (small) categories, the Lahi division, and the drum-beating participants. There was also a separate, non-competing division for corporate partners and sponsors.

AirAsia participated in the dako category, and they had a stunning float (no, I am not saying this just to flatter them—just look at the photo above). Admittedly though, I couldn’t call it my singular favorite, not when Dabawenyos went all-out with their creativity and artistry. How can you choose a winner among these moving works of art?

Taking photos of the floats was an exercise in managing your attention. Get too awestruck by the floral arrangements, and you might miss the chance to snap a good photo; spend too much time on your viewfinder and you won’t fully enjoy the spectacle in front of you.

It was also almost physically impossible to stay still while the drum floats were nearby. I couldn’t help banging my head and shaking my hips as the percussionists performed their routines. If you think that dancing is strenuous, wait until you experience resisting the urge to move and groove to festive beats and energizing chants. Who knew that self-control could be that exhausting?

That said, I did manage to get a grip and stabilize my viewfinder for mere seconds. After I took the shots above, I ditched the idea of getting as many beautiful photos as I could and decided to enjoy the moment.

(Half-kidding. Of course, I snapped a few shots whenever the moment felt right.)

If you want to get great photos of the Pamulak and Pitik sa Kadayawan next year, prepare a good camera, extra memory cards, bottles of water, a great deal of patience, and a good night’s sleep. The parade begins at around six to six-thirty in the morning, and crowds begin to flock Roxas Avenue, CM Recto Avenue, and the surrounding streets as early as the crack of dawn.

While eagles are majestic, bats can apparently be as cute as puppies.

Two hours northwest of the Poblacion District (and yes, still within Davao City) is the Philippine Eagle Center, nestled within the lush forests of the region. Among the birds of prey and other animals in the facility are a few rockstars. For instance, the eagle printed on our 1000-peso bills, Viggo, resides here.

Even at rest (which most of them were when we arrived), these eagles have a commanding presence. It must be their talons, sharp beaks, or shiny feathers.

However, there’s another flying creature that competed for my attention: the fruit bat. East of the Poblacion District, just ten minutes off the coast of Davao City, is the Island Garden City of Samal—home to the world’s largest single colony of bats.

These creatures are nowhere as commanding as the mighty eagle, and they don’t need to—with such an unexpected cuteness and charm, they won my heart over.

The guides from the Monfort Bat Sanctuary explain that these nocturnal animals play a vital role in the region’s ecosystem. In fact, they may well be singularly responsible for the abundance of fruits in Davao—these bats are hardworking pollinators. At dusk, hordes of bats fly from the caves to look for fruit and nectar, their favorite foods.

A word to the wise: if you wish to see these cuddly creatures up close, you’ll need either a strong tolerance for terrible stenches or the ability to hold your breath like a diver. Their caves mix the aromas from rotting fruit, droppings, and other things that decay inside caves—other bats and their predators, among others—so stationing near the den entrances are not for the faint of heart (or nose).

Don’t try too hard to chase what is madayaw. In Davao, it’s everywhere.

If I could turn back the clock and do things differently, I would embark on this Davao trip with a calmer disposition.

Perhaps it didn’t come across in the musings I wrote earlier, but I was a nervous wreck for most of the trip. Part of it is understandable, given that I haven’t traveled in years, and this was my first travel assignment for work.

Otherwise, I wish I didn’t try too hard to chase what I thought was a worthy moment to write about and capture in photos. Had I just remained calm and still, I’d realize that the spirit of Kadayawan—of things that are good, treasured, and valuable—is everywhere in Davao.

You’ll taste it in the meals you’ll eat, all sourced from nature’s bounty and cooked with much passion, craft, and skill.

You’ll see it in every corner you turn, where a pleasant surprise in the form of a street art exhibit, a heritage museum, a cultural village, a chill bar with great drinks, a disappearing sandbar, and a bustling night market await.

And you’ll feel it as you take to the streets, chant “Kadayawan! Kadayawan!” and dance along with the drum beaters, cultural performers, festivalgoers, and newfound friends.

P.S. In retrospect, perhaps I shouldn’t make a fuss about durian taho next time. As penance, I promise to eat the fruit as is the next time I visit the King City of the South.