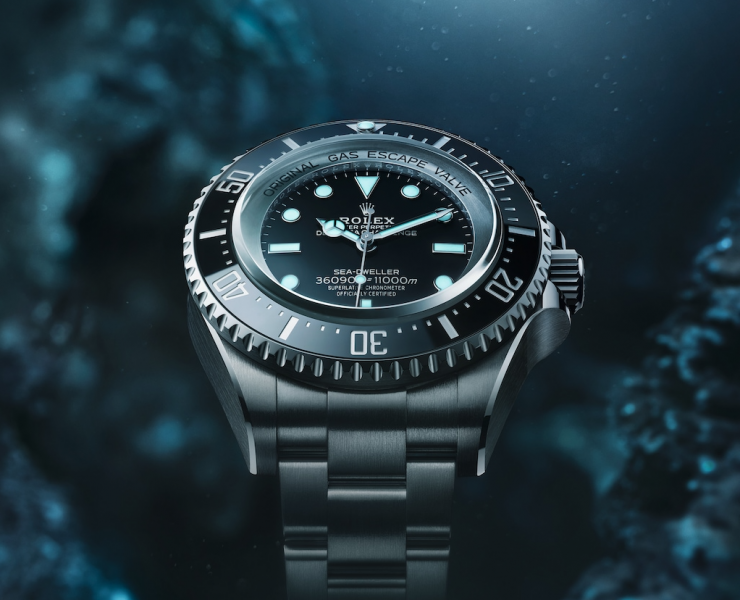 The Oyster Perpetual Deepsea Challenge can go more than 36,000 feet under the sea. And here’s the story of how it got there.

In an unexpected announcement just days ago, Rolex released the Oyster Perpetual Deepsea Challenge: the most waterproof timepiece that has ever been made available.

Large, imposing, and cased in titanium—it has a water-resistance rating of 11,000 meters (36,090 feet). This means you can actually strap it to a submarine and take it for a spin in the Mariana Trench: the deepest part of the Earth. Something that would seem unlikely, until you remember that Rolex has a history of doing precisely this sort of thing.

So how did The Crown manage to pull it off?

It all dates back to 1960, during the first manned exploration of the Mariana Trench. Swiss physicist-explorer Auguste Piccard went on an expedition down the trench using the Bathyscaphe Trieste—a submersible he had designed himself. At more than 10,000 meters undersea, it was the deepest dive that had thus far been attempted.

Rolex had been working on an experimental watch at the time, called the Deep Sea Special, and decided that it would be a good idea to send it down with the expedition—attached to the Bathyscape Trieste’s hull. After the dive, Piccard sent a cable to Rolex, reading: “Happy announce to you your watch as precise at 11,000 meters as on surface. Best regards Jacques Piccard.”

It was a new world record, and Rolex later used the results to create a more commercial diver called the Sea-Dweller in 1967. But Rolex wasn’t done with the Mariana Trench just yet.

In 2012, director James Cameron (known for the massively popular films, Avatar and Titanic) decided to embark on an expedition to the bottom of the Mariana Trench as well. Cameron wanted to explore the the Challenger Deep—the deepest part of the trench at more than 10,000 meters below the water—on board a specially-made submersible called the Deepsea Challenger.

Rolex, as part of the expedition,  sent him a prototype timepiece called the Deepsea Challenge. Much like the Deep Sea Special decades ago, The Deepsea Challenge was strapped outside of Cameron’s submersible.  The watch came back intact, and Rolex later released a special edition of the Deepsea Sea-Dweller in 2014, in honor of this achievement.

Now, 10 years after Cameron’s dive, we have the Deepsea Challenge: the culmination of Rolex’s research with the Mariana Trench expeditions. This one comes closer to the prototype that was outside of Cameron’s vehicle,.

At 50mm, it’s a fairly large watch (you might even say Titanic) but Rolex has managed to reduce the weight by using a grade 5 titanium alloy called RLX titanium. This new material makes the Deepsea Challenge 30% lighter than the prototype from 2012, and thus easier to wear. There’s also a visible grain on the satin finish and polished edges on the lugs, as well as a slimmer crystal.

So yes, between the weight and the design, it’s definitely more wearable than the prototype. And you don’t  have to own a submersible or even be a diver to appreciate its looks or where it’s been.

But how does the massive water resistance work? Without getting too technical about it, the watch uses Rolex’s Ringlock system to withstand the extreme pressures of the deeps. It’s a proprietary design that uses a metal inner ring to support the front and back parts of the case, which bear the brunt of the water pressure when you dive.

As you go deeper into the sea, the pressure likewise increases, but the force is diverted to the inner ring, which reduces the overall stress on the watch and grants it extreme water resistance.

To test how each watch would work, Rolex even developed an ultra-high-pressure tank in partnership with Comex (Compagnie Maritime d’Expertises). Comex is a French company that specializes in deep sea diving and research, and the result of that partnership is a tank that can reproduce a test pressure of 13,750 metres (45,112 feet) undersea. That’s pretty rough, but Rolex isn’t a stranger to sending its watches to extreme environments.

Powering the whole thing is Rolex’s in-house calibre 3230, an automatic chronometer movement with a power reserve of 70 hours and with a precision of –2 /+2 seconds per day. Between the accuracy and the water resistance, this is a watch that’s meant to be worn while you’re out doing things. If it can survive James Cameron’s wild trip to the Mariana Trench, weekend barbecues and trips to the beach won’t even make it break a sweat.

In any case, watch the video below to listen to James Cameron talk about wacthes, exploration, and the expedition to the Mariana Trench.