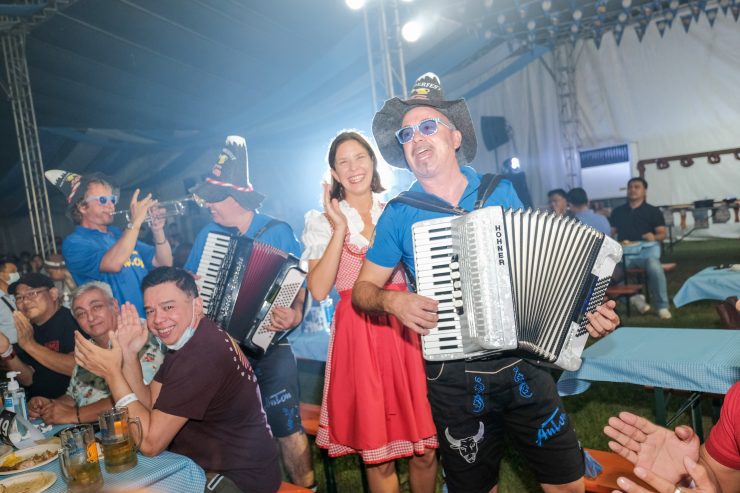 Finally being invited to an in-person Oktoberfest is a thrilling moment for any food writer. Nearing two years of isolation, online events can only do so much for me in terms of simulating the atmosphere of an actual feast. So, I had been itching for a proper Oktoberfest when the invitation from Clark Marriott came along—with safety precautions in place, of course.

After its first iteration in 2019, Clark Marriott Hotel finally brought back its Oktoberfest celebrations with gusto and grandeur. This year, the five-star hotel took to the much larger Clark Development Corporation (CDC) parade grounds for its venue.

German roots run deep in Clark Marriott, its General Manager, Goeran Soelter, shared at the media preview last October 5. For this year’s Oktoberfest, an authentic experience was their main aim. “If you can’t get a ticket to Munich, we want this to be the next best thing,” added the German-born GM.

The free-flowing beer of choice for the event, Weihenstephan, is a staple for Oktoberfests in many countries the world over. It is considered to be the oldest beer brewery in the world, claiming to have been founded in 1040.

Along with the signature German ale, the classic fare expected in the event is an assortment of sausage, pretzels, pork knuckle, and sauerkraut.

Aside from their commitment to an authentic Oktoberfest, Soelter added that “this year’s celebration is [also] our way of welcoming back Clark Marriott Hotel’s loyal customers, while reinforcing the ties that bind the brand to our customers since we’ve opened.”

Expecting a larger crowd than their Oktoberfest debut (which reached up to 900 guests), Clark Marriott Hotel estimated over a thousand guests to arrive at the sophomore outing.

A Return to Form

With all this in mind, I came to the event with elated anticipation. Clark Marriott’s festivities were slated over a two-day celebration from October 7 to 8. I was invited to attend the first day.

Arriving at the parade grounds, you’re met with the sight of a large white tent. Right before you enter, you’re given a large glass mug which you’ll be refilling with beer throughout the night.

As I took my first steps into the tent at around dusk, no time was wasted getting guests into the festive mood. Here, you’re greeted with dirndl and lederhosen-clad staff with pitchers of beer to pour your first mug full before you can even find yourself a seat.

The tent was filled with long wooden tables. astage and a dance floor was set up at front, while both sides were lined with the night’s food and fare. Hanging from the ceiling were large wreaths of greenery decorated with blue and white ribbons.

Right after seating at a table near the food spread and with a proper view of the stage, I downed my mug, which was briskly refilled by a passing waitress in dirndl-garb.

I helped myself to some pretzels and sausages as the program revved up at around 7PM. The event was formally opened and a tent-wide toast was done to kick everything off. At this point, I think I was on my third mug of Weihenstephan.

What happened next was probably the highlight of Clark Marriott’s Oktoberfest—the entertainment. German-based band Anton Show took to the stage, playing with such energy that did not wane one bit throughout the night.

They began by introducing a traditional German chant customary for Oktoberfest. After every three songs or so, they would go back to this chant that required guests to interlock arms and toast at the end—a fun gesture to keep guests on their feet and drinking.

I’m not sure which of them was Anton, but the band’s frontman (which I will now refer to him as such) would always be in some form of inflatable costume. At any point in the night, he would either be Elvis in a bikini, two German men stacked on top of each other, or a giant inflated man in lederhosen.

They started their set with German songs which, although foreign to most guests, had strong catchy hooks that would get anyone clapping to the beat. Anton would prance around the tables and dance with guests, hyping up guests to dance and drink with him.

Suddenly, a few songs and chants in at around 8PM, Anton Show performed Mr. Suave—a wild surprise for guests, especially the locals. This is when all hell broke loose. People were dancing on benches, tables, even more so on the dance floor.

I have never heard an accordion play such an iconic OPM song. This was the moment that truly energized the entire tent. The screams and cheers were so loud, I imagined that they could be heard from the outside.

Throughout the night, after a few rounds of German songs and chants, Anton Show would always go back to Mr. Suave. And every time, with no fail, the tent would go wild.

Just before midnight, I think I was six mugs into the festivities. The sequence of events started to become hazy. Anton was definitely still jubilating around the crowd in whatever inflatable costume he still had. There was also a dancing humanoid cat on stage—or perhaps, I just had too much to drink.

After around my seventh mug of beer, I finally tapped out and went back to my hotel room for some rest. I made it back safely, my head on a soft pillow and a belly full of beer.

Oktoberfest is finally back.

Clark Marriott Hotel is located at 5398 Manuel A Roxas Highway Zone, Clark Freeport, Mabalacat, Pampanga. For rates and inquiries, you can visit their website for more details.