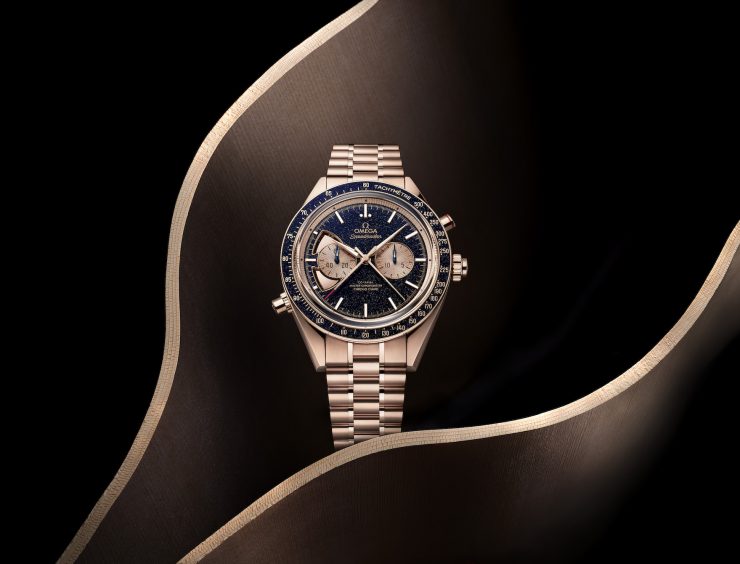 Omega’s surprise new releases are just as crazy as they sound.

In 1932, Omega debuted as the official timekeeper of the Los Angeles Olympic Games. Back then, they sent a single watchmaker from Switzerland. And along that watchmaker came 30 stopwatches.

These stopwatches were equipped with chronographs that could track two different events at once—such as two runners, keeping a record of their times—and were about as sophisticated as chronographs could get at the time. They were then used as the official timepieces for the games.

“To me this chronograph was a tremendous piece of technology and a great achievement already,” said Alain Zobrist, CEO of Omega Timing, in our interview from last year. “To me, that chronograph was the queen or the king of all our devices that we ever developed.”

Zobrist may have been right to consider them  chronograph royalty, as some of these antique timepieces still exist. All of them still work, ticking away in the Omega museum in Bienne, Switzerland.

But now—90 years after they were first used in the Olympics—these stopwatches are receiving a tribute. And they might have just dethroned the original.

Meet the new Olympic 1932 Chrono Chime and the Speedmaster Chrono Chime: the heirs to Omega’s Olympic heritage and quite frankly, a demonstration of Omega’s high watchmaking capabilities.

Both of these watches aren’t simple tributes, though. They’re packing some serious watchmaking tech. Each one sports a chronograph (which is essentially a stopwatch function) and a chiming complication (which lets you tell how much time has elapsed on the chronograph by listening to a series of chimes.)

The chiming mechanism uses different tones to represent units of time, and by adding up these chimes, you get the total elapsed time.

It’s just as crazy as it sounds, and easily one of the most complex things Omega has done. It took six years and the help of Omega’s sister company, Blancpain, to develop the movement. Called the Calibre 1932, the movement was made from scratch—and by hand—which will give you an idea about just how much effort it took to produce these watches.

First, let’s take a closer look at the pocket watch, which hews closer to the original Olympic stopwatches. At a glance, the watch evokes the style of the 30s, with its Grand Feu enamel dial and guilloché patterns on the inner bezel and sub-dials.

The guilloché pattern is special one, made as an exact visual representation of the soundwaves that the watch’s chimes make (that’s some attention to detail right there.) It uses the old Omega logo as well, which is a nice touch. On the back is an engraving that reads: Official Timekeeper of the Olympic Games. It’s done in cursive, which gives it more of a vintage feel.

This is all fantastic, to be sure, but what about people who love the history but want something that’s a little more suited for everyday wear?

That’s where the Speedmaster Chrono Chime comes in. It’s powered by the same movement, but is easily more wearable.

The dial is still in Grand Feu enamel, but done in blue aventurine, which makes it look sleeker. The acoustic guilloché pattern also appears on the inner bezel and the sub-dials as well, so you won’t miss out on those.

Both watches are cased in Omega’s proprietary 18k Sedna Gold, and both come in an acoustic walnut box that amplifies the sound it makes. The watches were recently launched at the Walt Disney Concert Hall, which is a venue that’s known for its brilliant acoustics.

MIchael Phelps himself—one of the champions of the Olympic world—was there to help present the new timepieces. And with his history in the Games, he knows a thing or two about how they’re timed.

“Omega precision has played a vital role in my own success, so I’m thrilled to help launch these incredible pieces of technology,” Phelps says of the Chrono Chime. “I’ve been with OMEGA a long time, so I know what the watchmakers are capable of, but these Chrono Chime timepieces are on a whole new level.”

Given how many crazy watches we’ve seen from Omega this year (such as the depth-defying Seamaster Planet Ocean Ultra Deep, the collab with Swatch, and the Speedmaster that keeps track of time on Mars), this is certainly the unexpected icing on the cake. But it is the year of the Speedmaster, after all, and Omega is pulling out all the stops. The only thing that remains now is to pick out which one you want on your wrist.