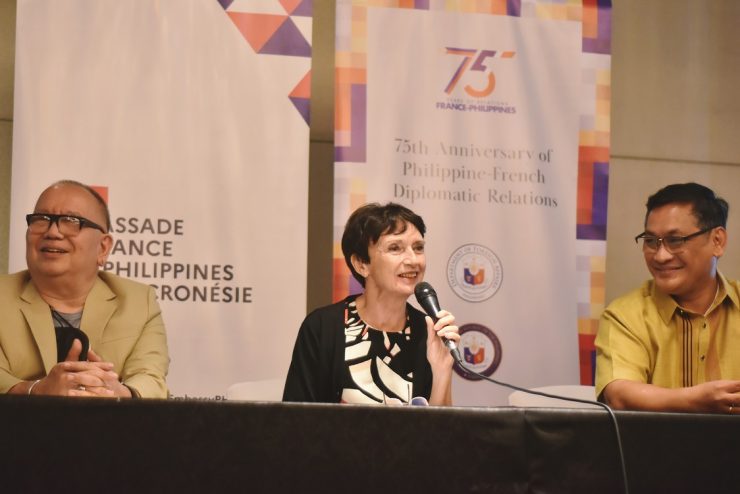 Until January 2023, the Philippine and French embassies will feature several events that highlight the ever-strengthening relationship between the two countries.

It was in 1947 when diplomatic relations between the Philippines and France were first established. Since the signing of the Treaty of Amity in Paris, both countries have taken steps to maintain a free and open Indo-Pacific area, uphold international law, maintain strengthened cultural exchanges, and take collective action against climate change.

The rapport between the two countries has continued to be strong and vibrant; this year, the Philippines and France celebrate the 75th anniversary of Philippine-French diplomatic relations.

In a press conference held last October 18, Ambassador of France to the Philippines, Her Excellency Michèle Boccoz, and Assistant Secretary Jaime Victor B.  Ledda, Assistant Secretary Office of European Affairs of the Department of Foreign Affairs, presented a line-up of activities that highlight French and Filipino collaboration, talent, and creativity. These will run from October 2022 to January 2023.

Still ongoing this month is the Marcel Proust-inspired art exhibit called, “In Search of Lost Time” by Stéphane Heuet. The artist’s style, known for his characteristic simple lines and colors, allows readers to identify with the novel’s characters and project their memories of reading the book. Viewers may visit the exhibit at the Alliance Française de Manille until October 31.

Also running is the French Film Festival, now on its 25th edition. Up until October 30, catch a fresh selection of films and current releases,  such as Eiffel, Lost Illusions, and The Promises at Greenbelt 3 Cinemas.

More art, sporting, business, and cultural events will take place until the closing ceremony, which will be conducted around the middle of January, in line with the Sinulog Festival.

With the highlighted events, both embassies hope to showcase the continuing commitment of France and the Philippines to boost and expand their partnership on various fronts, most notably in trade and investment, defense and maritime cooperation, industrial development, climate action, and culture and people-to-people exchanges.

“We are not just celebrating this one year: we are looking toward the future. One of the ways we plan to strengthen our links is working on people-to-people relations, especially the youth.” said the French ambassador.

In line with this, both countries have enjoyed a steady stream of exchange students and youth volunteers. “They are the ones that represent our future, [so I think] focusing on the new generation is the best way to move forward,” Boccoz added.

Other sectors that the ambassador identified are cinema, with more French directors shooting movies in the Philippines; tourism and hospitality; and business, trade, and investments.