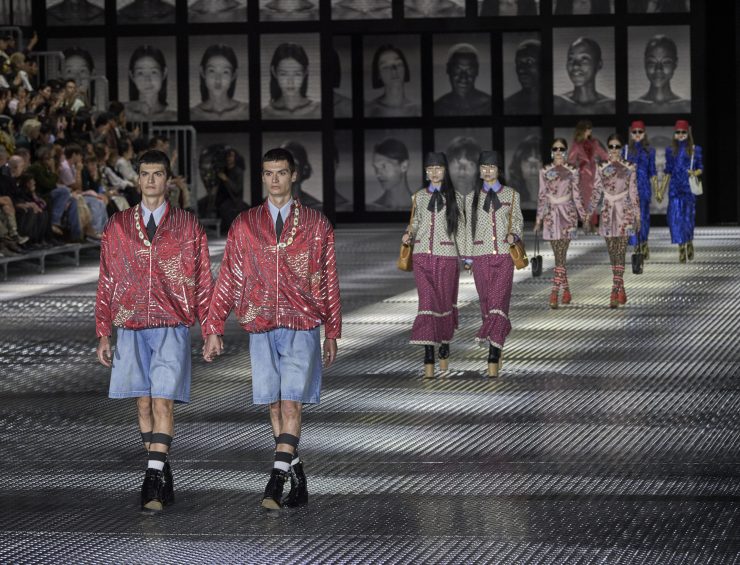 While it seems like you’re seeing double, Alessandro Michele invites you to take a second look.

“Never expect fashion to run out of gimmicks” is what one would probably think after seeing Alessando Michele’s recent show for Gucci.

As the name suggests, Twinsburg (which is, incidentally, a city in Ohio) featured 68 sets of identical twins wearing the same garments—and yes, there was a set of twins who were from Twinsburg.

But make no mistake: Twinsburg is more than a creative decision or mere gimmick. As Michele himself pens, he is a son of two mothers: “Two extraordinary women who made their twinship the ultimate seal of their existence. They lived in the same body. They dressed and combed their hair in the same way. They were magically mirrored. One multiplied the other. That was my world, perfectly double and doubled.”

The designer fondly recalls his childhood with his “two mothers,” citing that their “duplicated and expanded love gave rise to [his] eternal fascination for the double, for the things that seem to reflect equal to themselves. And this extends to his fascination with twins, of the “impossibility of the perfectly identical,” of nature’s attempt to create symmetry, yet foiled by the wildly different lives that twins may lead.

“Twinsburg plays this game, producing a tension in the relationship between original and copy. As if by magic, clothes duplicate. They seem to lose their status of singularity. The effect is alienating and ambiguous.

Almost a rift in the idea of identity, and then, the revelation: the same clothes emanate different qualities on seemingly identical bodies. Fashion, after all, lives on serial multiplications that don’t hamper the most genuine expression of every possible individuality.”

The result is a spectacle that seems to be one of a kind, for all its duplicity—that the intricate patterns, clean cuts, and diverse silhouettes were seen in perfect parallel, yet still distinct in their own individuality, creates this unique effect that makes us think about questions on originality, authenticity, and expressing yourself amid our sameness and differences.

Gucci’s decision to be playful and experimental at Milan Fashion Week drums up excitement on how the house will push its presentations further, especially since the brand has appointed its new CEO for Gucci Vault and Metaverse Ventures, Robert Triefus.

In his new role, Triefus will focus on emerging opportunities for brand expansion, shaping and scaling the House’s Metaverse and gaming strategies as well as overseeing Gucci Vault, the new experimental online space launched in September 2021.

Check out more looks from Twinsburg below, as well as the celebrities who graced the show in Milan: