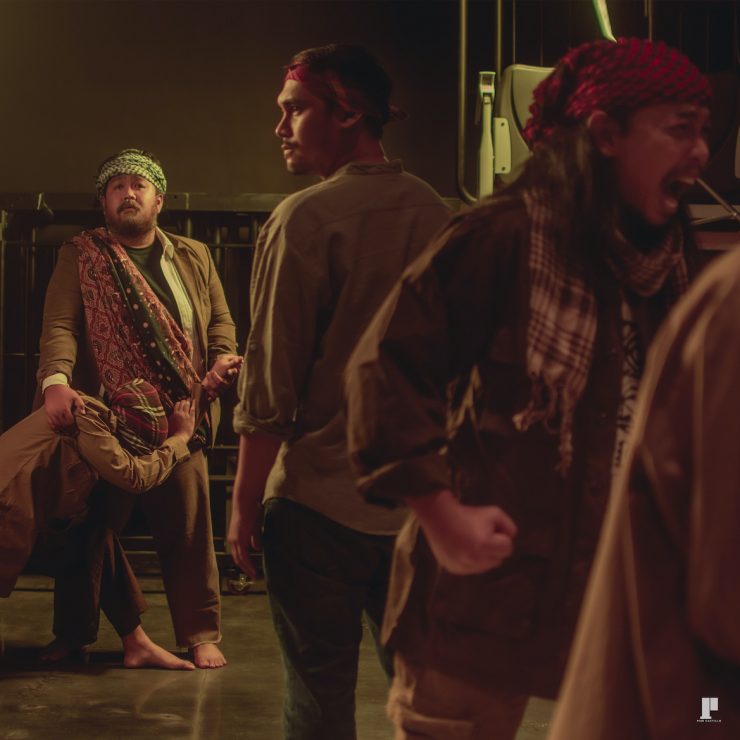 Tanghalang Pilipino’s ongoing play is the story of a land and its people mired in conflict, drowning in tragedy, for years too many to count.

On the surface, it is the story of three individuals: the boy Karim, the family man Abdulmari, and the rebel Jibin. Beautifully told through powerful songs and emotive movement, color and shadow, costume and prop, gunshot and sword thrust, Rody Vera’s “Anak Datu,” a production of Tanghalang Pilipino, is a force that will move you to tears, and tear you to pieces.

But it is much more than the story of three men. Early on you will see: this is the story of a land and its people mired in conflict, drowning in tragedy, for years too many to count.

More than a character in a play, Abdulmari is based on a real person. “Anak Datu” is based on a short story of the same name, written in 1968 by Abdulmari Imao, Filipino National Artist for the Visual Arts. In the play, Abdulmari is an artist, father to Toym, husband to Grace. But he is also Muslim, and this facet of his identity moves his being–and his family–through the story, through tumultuous times in a country torn apart by unrest.

It is in the 1968 short story that Abdulmari writes the story of Karim, the son of a village chieftain in pre-colonial Philippines, born in captivity, led to believe the pirate who raised him is his true father. In learning to lead, and in learning his true parentage, Karim learns who he truly is and what he can do.

Amidst all these is Jibin’s story, one that perhaps most dolorously tells the story of Abdulmari, Karim, and many other people in Mindanao who have sought peace and mourned the blood shed by friends, family, comrades. If history is written by the victors, then the chapters they choose to erase and omit are knives in the backs of those who continue to live with painful knowledge and no reparation.

Like Abdulmari, Jibin Arula is based on a real person, the lone survivor of what is now known as the Jabidah Massacre, an event that led directly to the decades-long rebellion in Mindanao.

In 1967, Jibin was a young Tausog man, father of three. He was only 26 when he heard about a military training center that his cousins had joined, and it didn’t matter that he didn’t know how to read or write, only that he would learn how to use a gun. On January 3, 1968, Jibin and other young Tausog men arrived in Corregidor for training. By March 18, only Jibin was left.

For Jibin, survival is punishment. He flees, seeks safety, only to have others learn of his ordeal and take up arms in anger and vengeance, while others still form separatist movements; the government does not acknowledge that the massacre even happened.

Intertwined with the stories of Abdulmari, Karim, and Jibin are the stories of birth and death, of the militant and the pacifist, of the myriad ways women speak their mind and fight for survival, of children and parents and brothers and sisters lost to bullets. These stories are told by a brilliant cast and crew, many with Mindanao blood in their veins.

Visual artist Toym Imao–yes, the boy in the play–is responsible for the set design, pop culture elements from his youth during Martial Law prominently side by side with the colorful veils and shawls and curved blades that are part of his father’s Muslim heritage. For Imao, this is clearly personal: his childhood is a tale put on stage, his parents are characters in a story he lived. For Imao, he is telling his family’s story in the way that is truest to his soul: through his art. He describes his work for “Anak Datu” thus: “three worlds through a child’s eye, of characters as action figures of history, positions of power that treat us as pawns and playthings, of Voltes V and dictators, heroes and villains, of sarimanoks and warplanes, the kris and the Lazer sword, of war and peace.”

Nanding Josef, Artistic Director of Tanghalang Pilipino, plays Jibin Arula as an old man, tortured by regret and haunted by the guilt of his survival. His is a powerful, raw performance, his voice cracking as he recounts his ordeal, as he wishes things had gone differently.

Hassanain Magarang is both choreographer and actor, playing Karim as an adult. But perhaps the most important thing is that Magarang is from Marawi City. In a story about decades-old conflict, Magarang is painfully reminded of a more recent tragedy: the 2017 siege that decimated Marawi City and displaced hundreds of thousands. During rehearsals, he was transported back to 2017.

“At first it was normal, like no reaction at all, but when [sound designer] TJ Ramos put on the Marawi Siege audio, where a full gun exchange could be heard and there were voices of the soldiers, my mind was suddenly visualizing my experience of the siege. The first night of the siege. I can’t really explain it, it was like I was in two worlds: while paying attention to the direction of [director] Chris Millado, my mind was back at the siege because of what I could hear. I was crying silently, my heart felt heavy. I really cannot explain. It was not trauma, it was more like I was back in that zone.”

Actor Earle Figuracion plays the dashing pirate Jikiran, Karim’s adoptive father. He traces his family’s roots to Mindanao as well, and he explains how the cast and crew were immersed in the worlds of “Anak Datu”: “We learned the accents of Mindanao, we learned the words of the languages, how to speak them in prayer and in song. We were encouraged to explore the movements and choreography as we felt would be appropriate for the scene.”

As Jikiran, Figuracion finds himself in many scenes with Lhorvie Nuevo, who plays Putli Loling, Karim’s mother. “I love the energy that we exchange. When we dance, when we move, everything I send her way, she sends back to me. Often we end up in tears.”

Indeed, while many words uttered in the play are swords through the heart, the songs and dances are equally sharp: songs of courtship and mourning, dances of love and despair, sharing in an hours-long play a story that generations have been living for decades

“Anak Datu” is not for the faint of heart. This play is for those who seek truths and understanding. “Anak Datu” is a barrage of questions: Why is Mindanao mired in conflict? Why are their struggles so unfamiliar to the Filipino consciousness? When will the violence end?

But “Anak Datu” is also a fragile fort full of hope, for those who look back at the past in their longing for a peaceful future.

“Anak Datu” is a production of Tanghalang Pilipino. The show runs until Oct 9, 2022, at the newly opened Tanghalang Ignacio Gimenez, at the Cultural Center of the Philippines.