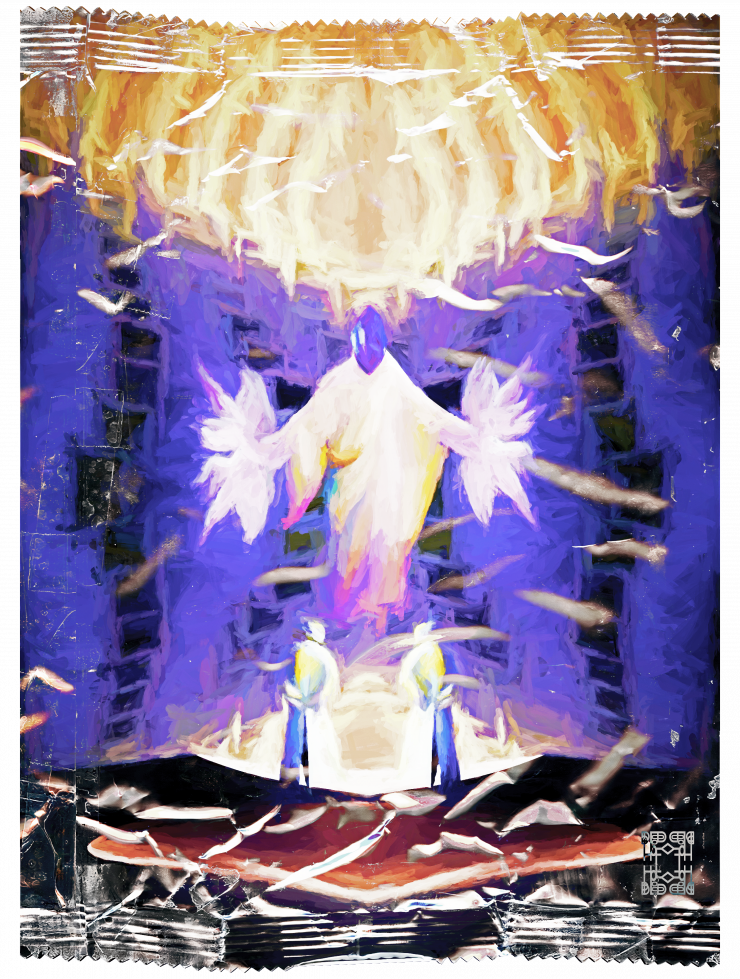 Above: “The Two Witnesses” by Holy Blood

Galeria Paloma features established and up-and-coming crypto artists from the Philippines and Singapore in 1/1 (read as One of One), the gallery’s second installment in a series of exhibits highlighting crypto art.

Up on display at the Power Plant Mall until October 4, 2022 and uploaded on the NFT art platform Foundation, these digital works of art minted on blockchain represent the gallery’s efforts to bridge digital art forms with traditional practices.

“Galeria Paloma is focused on bringing digital art to the forefront and presenting the work as viable art assets due to its inherent artistic merit. And with the blockchain infrastructure, there is now a solution to issues that arise in digital art ownership such as authenticity, proof of ownership, and artist royalties,” says gallery director Kimi Rocha-Delgado.

One of the artists featured in 1/1 is Luis Buenaventura, with an animated artwork that commemorated the recent Merge of the Ethereum blockchain. This holds sentimental value to Buenaventura’s crypto career, having been one of the artists included in the first NFT art collection ever minted on the Ethereum blockchain, Curio Cards (2017). It is also the first lot in the history of Christie’s that sold in Ether for $1.2 million.

Graphic designer, crypto artist, art director, and illustrator AJ Dimarucot employs artificial intelligence (AI) in his work “Ang Huling Hapunan,” a tribute to reproductions of “The Last Supper.” The artist transforms the image into an electric, expressionist artwork that morphs into a scene of families gathering at a fast food restaurant. This allusion is also a tongue-in-cheek commentary on the capability of artificial intelligence “[to spit out] imagery in no time,” as the artist says.

Win Magsino’s collection, Ghosts of Luggard Road, is a trio of 1/1s that were almost never captured. The photographer planned to take views of Victoria Harbor, but was met instead by a thick fog covering the vista. Turning toward home, he realized that the trees along the path were more captivating. Win Magsino has won top awards at various international photography competitions, but one of his highest honors was the Ani ng Dangal honor from the National Commission of Culture and the Arts in 2021.

“Symphony of Stars,” the piece by award-winning photographer Cris Magsino, is an animated image of the night sky gracefully moving over the turquoise crater lake of Kawa Ijen volcano. The photograph was awarded the Jury Top 5 selection and Honorable Mention at the 2020 International Photography Awards and Bronze at the 2020 Moscow International Foto Awards.

Photographer, performer, and visual artist Raymond Lauchengco showcases his landscape photography for the exhibit. His images are interspersed with the recording artist’s spoken word and narratives, as well as other images abstracted to hint on the surreal and the sublime.

Jopet Arias, a painter, forerunner in the local crypto art scene, and co-founder of CryptoartPh, joins the roster with original works on canvas with his signature style: traditional media intersected by digital technology, put to the fore with augmented reality (AR).

Painter and sculptor Carlos exhibits his paintings, animated by motion designer Motioneer (Isaiah Cacnio), a motion graphics artist who also presents his own original work at 1/1.

1/1 also features Wyn-Lyn Tan, a visual artist from Singapore who has also made an impact in the crypto art scene with graceful, morphing landscapes.

Commemorating the exhibit is a limited edition collaborative NFT, “The Twelve.” The multilayered piece is an adaptation of “exquisite corpse,” a parlor game invented by Surrealists where each member builds on a previous participant’s work. “The Twelve” will be distributed among the artists and select supporters of the crypto art community.

In the coming weeks, Galeria Paloma will be launching “Galeria Paloma Perspectives,” an educational initiative that will host talks, panel discussions, and lectures about the art world and its integrations of Web3 in its practices.

1/1 is mounted in partnership with Samsung The Frame. For more information, visit galeriapaloma.com. You may also check out their official Facebook and Instagram accounts at @galeriapaloma.