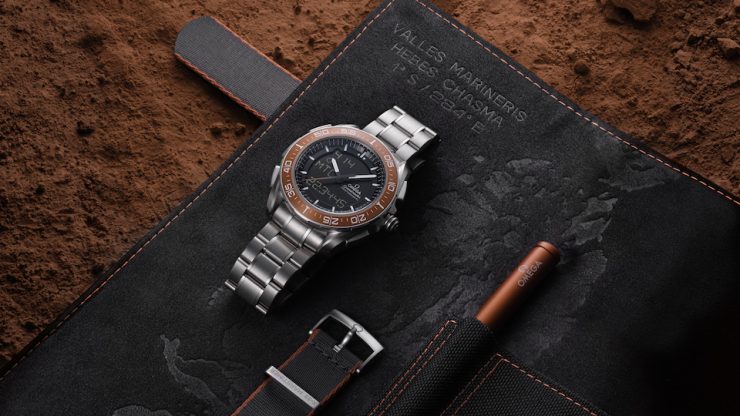 The Speedmaster sets its sights well beyond the moon and looks into the Red Planet.

It’s been quite a year for Omega. Between the 65th anniversary of the watch that went to the moon, the massively popular Swatch collaboration, and new programs for space exploration: it’s given us a lot to think about. But it looks like the brand isn’t stopping anytime soon. And this time, it’s got its sights set on the red planet.

The Speedmaster X-33 Marstimer is a watch that’s meant to help scientists keep track of the time on Mars. It was created in partnership with the European Space Agency (ESA), an organization with 22 member states that’s focused on space exploration. And given Omega’s track record of doing just that, this is a match that’s made in the stars.

The Marstimer takes its looks from the Speedmaster X-33 collection, though it sports a red bezel that references the color of the sand on Mars. This goes particularly well with the black dial, providing some contrast to the 45mm grade 2 titanium case. The dial has a combination of analog and digital displays, which let it perform a whole load of functions.

So what exactly does it do? First off, it can track times and different time zones, both on Earth and on Mars, which is a handy ability for astronomers and space enthusiasts.

Keeping track of the time on the Red Planet can get a little tricky, since a day on Mars (also called a sol) is longer than a day on Earth—measuring 24 hours, 39 minutes, and 35 seconds. Similarly, the years on mars also last quite a bit longer, with 687 Earth days per year. The Marstimer manages this with its digital and analog displays, using symbols on the dial to indicate Earth and Mars time.

Aside from tracking the time, the Martsimer also features a Mission Elapsed Time Function, which lets you keep track of how much time has passed since your mission started. In pedestrian terms, it will let you time how long it takes to go on a coffee run, starting the timer at zero from when you walk out the door.

It also has a Phased Elapsed Time feature, which lets you set timers for events during missions. Say, you need to pick up some doughnuts exactly 20 minutes after you start your coffee run mission, you can set a timer on the watch to remind you. These features are mainly used for space missions, but nothing’s stopping you from having a little fun with it.

Built into the watch is a solar compass that can track true north on Earth and on Mars. So if you ever find yourself in a ‘The Martian’ sort of situation like Matt Damon, the Marstimer has your back.

The Marstimer is powered by Omega’s 5622 Calibre: a quartz movement developed specifically for the  watch, which handles all its displays and functions.  Overall, the Marstimer looks like it’s going to be a lot of fun for anyone who’s interested in space travel.

“Anyone interested in space, or even science fiction, is obsessed with Mars. It has generated so much curiosity, so many incredible stories. We have even created a name for its imaginary inhabitants,” says  Omega President and CEO Raynald Aeschlimann. “It’s so close yet so far. We long to walk across its surface. To be here on Earth and able to track its movements, gives the term timepiece a whole new meaning. I’m thrilled with this new addition to the famous Speedmaster family.”

The Marstimer comes with a dedicated NATO strap to switch in for the bracelet, a strap changing tool, and a special watch roll, which has a reproduction of Mars’ Hebes Chasma canyon on the inner lining.

It may be a while yet before humankind sets foot on Mars, but given that we’re in the new Space Age, who can really tell? And it’s good to know that when we get there, we’ve already got a watch to strap on our wrists to keep track of the mission.