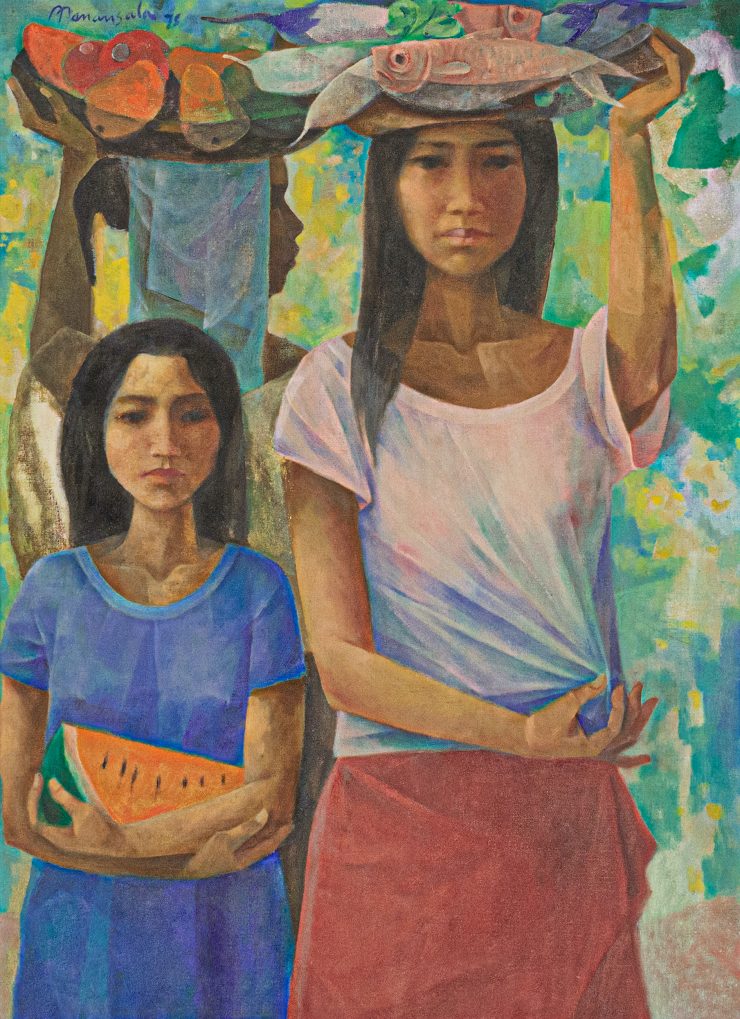 At Salcedo Auctions’ marquee event, MANTLE’s associate editor gets captivated by a Manansala, an unconventional time piece, and bananas.

The International Rice Research Institute (IRRI) in Los Baños houses two large-scale Vicente Manansala works. One mural depicts fisherfolk, rice farmers, and laborers hard at work; the other showcases more joyful scenes of games and festivities. Since 2015, these paintings have since been declared by the National Museum as National Cultural Treasures.

My mother used to work at IRRI. Whenever I’d visit her office as a kid, I’d walk in front of these murals, end to end, to figure out the images on the canvas. I didn’t know who Vicente Manansala was at that time, but I remember being enamored with the colorful panels and overlapping shapes that created lively scenes.

So when I saw the painting (“Untitled (Vendors)”) featured on the invitation of Salcedo Auctions’ marquee event—The Well-Appointed Life™—days before the vernissage, memories of that curious kid staring at Manansala murals for hours on end came flooding back.

It had been years since I saw those works that marked my childhood, so it made me excited to view a similar work—though smaller—that could take me back to more blissful and carefree days.

I enjoyed appreciating “Untitled (Vendors)” up close at the vernissage. The auction house described the work as a “[showcase of] not only the allure of Neo-realist Cubism but also the sumptuously laden mood and festive palette of a quintessential Philippine scene.”

I also found myself drawn to Ang Kiukok’s “Bananas #3” and “Bananas #4” —perhaps it’s my penchant fir still life or the warm colors that Kiukok used.  These early works are Philippine Art Gallery-era paintings that were once owned by ex-CIA agent, USAID director, diplomat, and published author Rufus Philips.

Other paintings were quite arresting, thanks to their use of color, texture, or mere unconventionality. There’s Felix Resurreccion Hidalgo’s “Tempestad Nocturna,” which captures the turbulence of waves in muted greens; Oscar Zalameda’s “Untitled (Fiesta),” vibrant and dynamic in all its colorful glory; and a rare 1969 BenCab untitled mother and child.

As we were enjoying cocktails by Remy Gallo at the vernissage, Devi de Veyra, Salcedo Auctions’ PR Specialist, told me that there was a fine selection of watches on display. We walked toward the “Fine Jewelry & Timepieces” section to check them out.

I directed my gaze toward a watch that seemed to stare right back: a Rolex Precision in yellow gold. Its eye-shaped case—24.1mm in size and 8.9mm in thickness—isn’t a typical Rolex design, which is probably why I noticed it first.

Ms. Devi tells me that the watch looks more like a bracelet than a watch, but we were both enchanted by it nonetheless. It’s perfect for thin wrists like mine, I thought—never mind that it seems quite challenging to tell the time with such a small case.

Personal preferences aside, there were heavyweights alongside the dainty Rolex Precision: a Patek Philippe Nautilus Ref. 5711/R (which my editor-in-chief predicts will sell well) and a 1979 Rolex Cosmograph “Daytona,” which watch collectors will be looking out for.

The Well-Appointed Life™ live and online auction will take place on Saturday, September 17, 2022 at 2PM. Register to bid and browse the catalog at salcedoauctions.com. The auction preview will run daily from 9AM-5PM at NEX Tower, 6786 Ayala Avenue, Makati City.