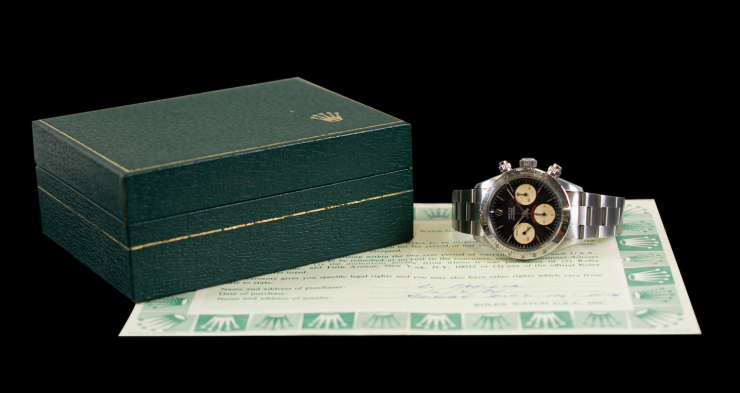 The curators of Salcedo Auctions have come up with a selection of premium vintage timepieces. And on June 25th, these watches will be up for bidding.

The watch section is likewise something to get excited about. And considering the surge in interest for timepieces during the lockdown, it’s looking bullish for the watch market. Salcedo Auctions, which has been offering rare timepieces since it was established over a decade ago, has kept its finger on the pulse of all of these developments, and is now offering vintage pieces from Rolex and Omega as the highlights of their watch section.

“When one watch gets passed on to another generation, or the next owner, there’s history that goes with it. What happened during the time when the previous owner used it, the stories and achievements associated with it, etc.”

Priela’s interest in watches was sparked by a gift from his father, and this interest is something that has stayed with him since.

“He gave me his first Rolex, which he got when he became a doctor,  so that was probably in the late fifties or early sixties. He gave it to me for my 21st birthday.”

“The watch that my father gave me, he wound it for years,” Priela shares. “Now I am winding it myself. So there’s that continuity and connectivity between us.

It’s this vintage experience that Salcedo Auctions brings to the block on June 25th. From their room list, they’re offering six vintage Rolex and Omega models—each piece an example of horological craftsmanship for its time. They are mementoes from the previous owners’ past, and markers of great historical moments associated with their creation.

Thanks to Paul Newman, the Rolex Daytona has become one of the most sought-after models. This Daytona “Big Red,” circa 1979, is a watch that a serious collector would find interesting. It gets its nickname from the bold red “DAYTONA” marking on the dial, which appears above the sub-dial at 6 o’clock. This piece was manufactured less than a decade before the manually-wound Daytona permanently left the Rolex catalogue in 1988.

The Oyster Perpetual Datejust is the all-rounder Rolex, a sophisticated model that can go from the boardroom to a weekend road trip. This piece from the late fifties carries some of the traditional Datejust design codes: the fluted bezel, the clean presentation, and the date window at 3 o’clock. Just a few years ago, the watch gained media mileage after the 2014 showing of the historical drama, Selma, which showed David Oyelowo (as Martin Luther King, Jr.) wearing a 50s-edition Rolex Datejust.

Part of the new Rolex Cosmograph collection introduced in 2000,  this model houses the Calibre 4130 movement, the adoption of which resulted in a few changes such as the positioning of the dials, and an increased power reserve. It also has bigger hands and hour markers for better legibility.

The GMT-Master II resides in the more popular end of the watch collecting landscape, and Rolex made waves in this year’s Watches and Wonders by releasing a left-handed version.  This move, despite being unusual (or perhaps, because of it), has sparked even more interest in the GMT-Master II collection.

This particular model comes with a blue-and-black bezel, which has earned it the nickname “Batman.” (The letters BL and NR in the reference number stand for bleu and noir.) Unsurprisingly, the “Batman” is one of the more popular GMT-Master II models, and it comes with the classic Oyster bracelet.

The GMT Master II can be used to display two time zones at once. The hour hand is used to display the local time, while the arrow-tipped GMT hand is used to keep track of the time at home. The bezel, meanwhile, can be used to tell whether it’s day or night in your “home” time. It’s a model that traces its roots back to the fifties, when the now-defunct Pan American Airways commissioned Rolex timepieces for its pilots, who needed to tell time in their current location, as well as in their destination.

This model is one of the premium editions released by Omega in the 50s. The caseback features the observatory of Geneva surrounded by eight stars, which commemorate Omega’s two precision world records and six first-place finishes in chronometry at the Kew-Teddington observatory in the 30s. Just so you know, Elvis Presley wore an Omega Constellation while in the army.

The Ploprof is a tool watch through and through, and definitely looks the part. The massive case is matched by an equally massive water resistance of 1200 meters. And while it was built for deep sea diving, it found itself on the wrists of people like Gianni Agnelli: the uber-stylish industrialist who famously wore his 70s edition Ploprofs over his cuffs. This later edition (produced in 2009) retains the chunk of its predecessors, but with improved features, such as the Omega Co-Axial calibre 8500 automatic movement.