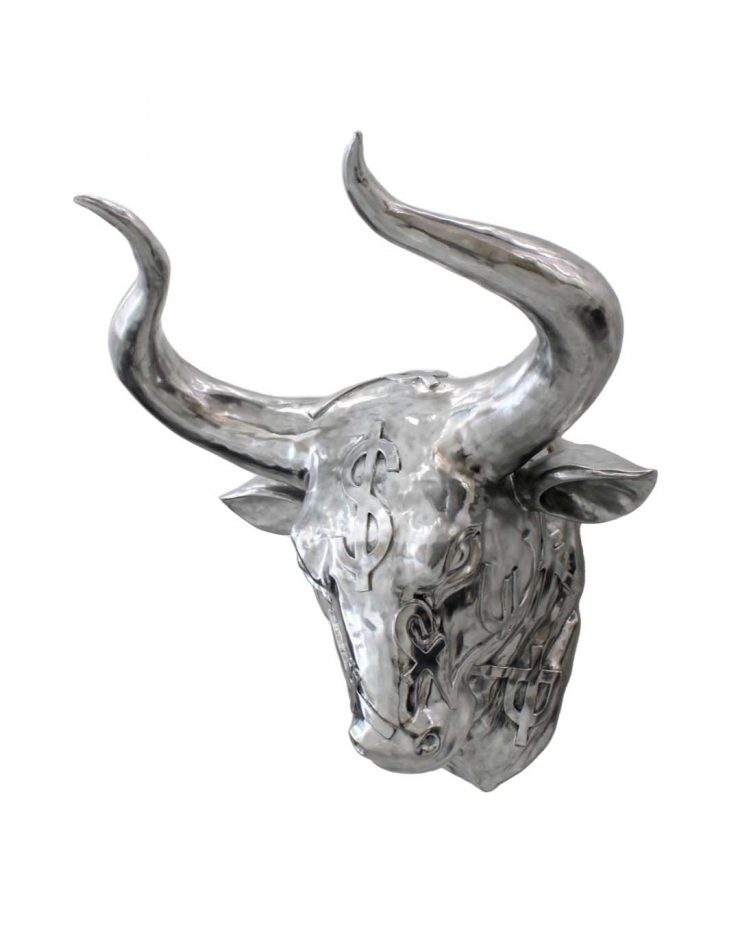 Throughout the ages, the bull has been a popular and prominent motif in art. From the oldest cave paintings in human history, myths in ancient Greek culture, to works of art in modern times, the animal has evolved and acquired various meanings: from a representation of raw strength; a revered and feared deity, riches and bountiful harvests; to depictions of struggles and overcoming them.

In his latest exhibition named “TAURUS,” sought-after Filipino sculptor and mixed-media artist Michael Cacnio follows this tradition of immortalizing the bull, depicting the animal as a symbol of man’s progress. This harks back to Pablo Picasso’s “Guernica,” wherein the bull represents strength and authority.

Vincente Marrero, in his book “Picasso and the Bull,” famously wrote of Picasso’s depiction of bulls: “His bulls, quintessentially the bull, are lords of the world in which he paints.” Similarly, in Cacnio’s collection of sculptural pieces, we are being confronted by an aesthetically resilient, and thematically interrelated material of memory and a projection of possibility.

By taking daily life as subject matter, while commenting on the everyday aesthetic of Filipino values, he documents the most poignant moments of our shared and collective experience of recent tragedies and events.

In so doing, the artist also aims to illuminate the path toward change and progress. The works presented in his exhibition aim to suggest that we should charge unrelentingly toward hope.

Cacnio’s exhibit, a significant deviation from the artist’s established oeuvre, is something to look forward to, especially for those who have been following the artist’s body of work. He is most recognized for his idyllic and archetypal renditions of daily Filipino life such as in his Kite-Flier Series and Balloon Series.

Among the major works to be shown in “TAURUS” is a 6’ x 8’ sculpture of a bull that weighs almost a ton. The exhibit also coincides with Cacnio’s 53rd birthday, which will be celebrated during the artist’s reception on May 25, 2022. This event is also the first show in a series of several major exhibitions proudly presented by Art Lounge Manila to mark the Grand Opening of its newest space in Molito, Alabang.

“TAURUS” by Michael Cacnio is presented by Art Lounge Manila. The exhibition is located at the Molito Lifestyle Centre, Ayala Alabang, Muntinlupa. The show will run from May 14 to 28, 2022, with the artist’s reception on May 25, 2022.