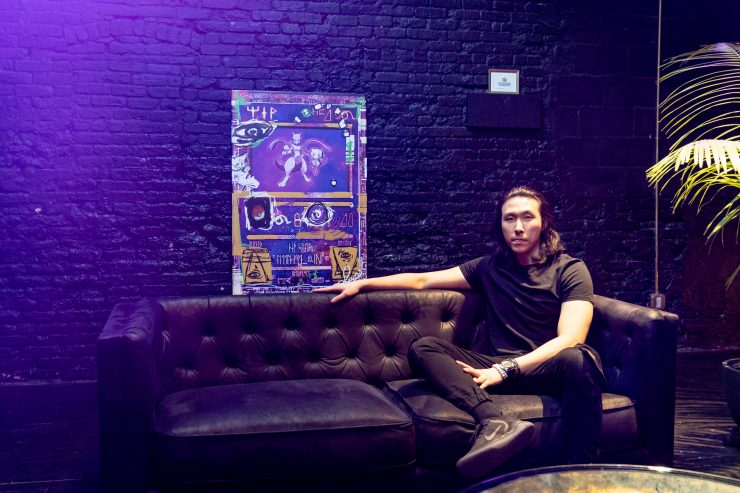 The New York-based Filipino artist transforms characters and icons from his childhood into cheeky, even daring images

In Sean Go’s pop art world, Mickey Mouse transforms into a cheeky creature who gets caught reading Playboy Magazine. Alternatively, he becomes the Mousefather, smoking a cigar while wearing an intense expression.

It’s also a universe where Winnie the Pooh is fond of polvoron (or Poohlvoron, if you will), a soft and crumbly shortbread, instead of honey. In other forms, he transforms from a gentle bear to the “Poohnisher”—after all, in another world, Pooh could have been a ruthless killer, couldn’t he?

“I ‘do’ pop appropriation art because it’s fun!” the New York-based Filipino artist candidly shares, defining himself as a pop appropriation artist. “[I take] concepts, ideas, characters, brands, or recognizable intellectual property, and then [I] spoof them or bring [them] together in some way. Essentially, it is making a parody of existing characters such as Mickey, Winnie the Pooh, and Pikachu, for example.”

Go’s pieces stir contradictory emotions and ideas for most onlookers. On one hand, the cartoon references evoke a sense of nostalgia; on the other hand, as they’re presented in unconventional ways or with surprising elements, they become simultaneously unfamiliar.

“I love pop appropriation art because it evokes a sense of nostalgia, but I simultaneously want to destroy it. We often over-romanticize the past and our childhood, but I want us to challenge the concepts that we thought of fondly as kids,” he adds.

Go also brings cultural elements from the Philippines to his works—a nod to his roots. Inspired by artists like Andy Warhol and Roy Lichtenstein, these particular motifs allow Go to respond to and appreciate the everyday life subjects and culture from his home country.

“[This way, I can help in] creating a community with fellow artists from our Asian minority group [in the United States] to promote diversity,” he adds.

The roots of Go’s artistic process and influences run deep in the Philippines of the 1990s. Passionate about the cartoons of the 90s, the young Go took Disney, manga, and anime seriously—enough to drive him to teach his classmates how to draw during their recess periods at primary school.

“If you enter my house in Manila, you will find my hand painted self-portraits of a 2 year old baby Sean and another one of a pre-teen Sean, along with large piles of sketchbooks filled with drawings of new Pokemon that I created, Dragon Ball Z characters, and Clone Troopers with stylish battle scars,” he shares.

“Perhaps I have been a pop appropriation artist for a long time, given how I always wanted to draw better versions of the cards I played or cartoons I watched.”

Go’s artistic talents further flourished under the tutelage of an art tutor that taught him the basics of watercolor, portraiture, and still-art, among others, once a week. (Paul Cezanne was one of the artists they studied, he recalls.)

Ironically, it’s his passionate love for the craft that also led to his gradual falling out of it. In his teens and college years, his peers teased him for liking art and anime, which often had “effeminate” connotations among his circles at the time.

And while his parents supported his art as a hobby, they weren’t so keen on letting Go pursue it as a career at first. As a result, art had to take a backseat when he graduated from college and pursued his MBA.

“Unfortunately, my love for art [really] fell out during my years working for a string of finance companies in Manila, Singapore, and the USA, for practical reasons. Admittedly, art isn’t the easiest way to make an income,” he says.

Years later, it took a few wake-up calls for Go to rekindle his passion and reclaim his desire to create art.

“COVID-19 and the recent death of one of my closest friends really made me realize that life is so fragile and that you should just pursue your passions, regardless of what other people think. You may never have the opportunity to do so again, don’t let these chances slip,” he emphasizes.

Given these setbacks and how he overcame them, it’s no wonder that Go doesn’t hold back in getting seriously playful—or even playfully serious—with his works.

Perhaps a cheeky one is his recent pop art piece of Sebastian from “The Little Mermaid” on top of an oyster and what looks like a splash of water.

“There’s a lyric in Sebastian’s song that goes: ‘Darling, it’s better / Down where it’s wetter / Take it from me.’ We all know what that means, and we also understand what oysters are innuendos of,” he says.

On the other hand, in “Frozen Kalesa,” he juxtaposes the intricately colored colonial era carriage with an image of Elsa from “Frozen.” “Adding her to a kalesa introduces thought provoking questions – is she carrying too much weight? Does she have to let go? Or does she thrive and gain satisfaction from her responsibilities as a princess?”

“The fun spirited piece has deeper symbolism – Filipinos love riding the American wave culturally, and the Filipino dream is even to move to America for many families. Is this too much of a colonial mentality and should we be more interested in our own unique culture?”

“I think when someone first looks at my art pieces, they will think that it’s lighthearted, witty, playful, and even funny,” he says. “But when one takes a deeper look, revelations of political, social, and cultural commentary start to surface and you see that under the comical veneer of my pop art, there is often a deeper and more nuanced message.”

Not one to spoil or define just one meaning for his works, Go reminds us that with pop art, interpretations are as diverse as they can get. Citing a key lesson he learned from Jasper Johns’ “American Flag” series:

“It’s all in the details. That said, modern art is a beautiful experience because I really believe that the viewer is the protagonist of the story. No single interpretation is right and your interpretation of my piece is just as valid as mine.”

The Business of Pop

Granted, Go has burst his own limiting bubble and is having so much fun taking popular elements to express his ideas. But as much as he enjoys the artistic process, he doesn’t shy from speaking about the business side of art—an aspect of creative work that some artists find “unsexy.”

In fact, Go admits that didn’t earn money from his first few pieces.

“I did some trade-for-product deals at first. I’d give my clients a pop art piece in exchange for dinner that’s somehow worth the piece’s ‘value,’ for instance,” he recalls.

These clients—most of whom were his friends at the beginning—would then post photos of Go’s works online, which the artist would then repost. “Those photos would then reach more people, who in turn would inquire about my art. In a sense, it was an organic way of creating a following.”

“At the beginning, [you can say that] I approached [the business side of my art] like how a start-up entrepreneur would,” he added.

As more interested buyers came in and Go started building a larger body of work, he knew that he needed to take the next logical steps—agency representation and gallery shows. “These are helpful and more secure ways of not only building a community around your art, but also earning from it,” he notes.

However, unless you get lucky with a billionaire patron who does an overnight purchase of your art for a large sum (which is possible, but highly unlikely), Go stresses that diversifying your income streams through art is highly recommended—especially for an artist like him living in New York, a gallery show or two may not be enough to cover his living expenses in the long term.

“Agents and galleries get a cut of your revenue when they get to sell your art. So in a group show, for example, say you agree to a 50/50 cut and the gallery gives you space for three works, each valued at $1000. They get to sell everything, so you get half—$1500. In the US, that’s not exactly enough for your living expenses in a month,” he explains.

Go further explains that even if an artist hosts a solo show—an exhibit with twenty works, for instance—and sells everything, they may probably only get enough profit to sustain themselves for less than a year or so. “That’s why I know artists who double or even triple-track their initiatives, going the traditional agent/gallery route while also exploring social media, ads, and the like.”

But above all these business methods, Go underscores that what’s most important still is the artwork itself. “Art is driven by investment, yes. But collectors and customers tend to be attracted to works that are unique and bear distinct meanings—pieces that resonate with them. So it’s important that artists, whatever way of earning  they choose with art, define their niche and be great at that.”

This balanced approach to art and business drives Go to become a Filipino version of Jeff Koons, an artist that he looks up to. It is a logical goal, as the two have much in common—beyond the pop appropriation connection, both Go and Koons come from finance backgrounds.

Playful as he is with his works, Go stresses that he’s in this for the long haul.

“People who know me know that all my relationships – business and friendships – are long term, because I love building sustainable partnerships with people in my life, including my collectors,” he says.

Recently, Go was able to stage a show in New York City in collaboration with fellow Filipino artists, DJs Luis Villanueva and Jonte Yulo, in a marriage of pop visuals and catchy beats. He hopes to get into more group shows soon in Manila through his agent, Derek Flores of DF Art Agency.

And just like Koons, Go also wants to venture into physical sculpture, and even wide-scale activation spaces. “My family and a lot of my friends from Columbia University are in real estate, and it would be a dream to install art in public parks, and other large scale installations similar to the Vessel in Hudson Yards, but with a Sean Go twist.”

“And in my lifetime, I want a Sean Go artwork to be sold for more than a million dollars, whether in an auction here at Sotheby’s, Christie’s, Phillips, or even at the León Gallery in Makati. I aim high!”