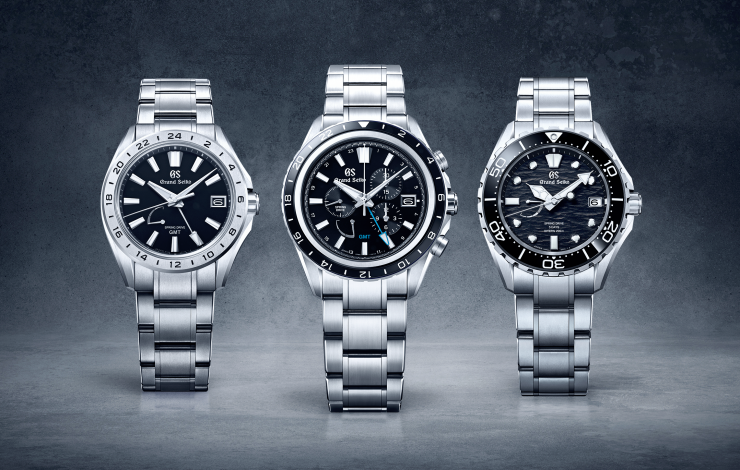 Small yet significant refinements add a distinct touch to the Japanese brand’s new sport watches, which all pay homage to the Grand Seiko timepiece that started it all

Truth be told, there wasn’t anything subtle about Grand Seiko’s first outing at Watches and Wonders Geneva 2022.

There’s the Grand Seiko Kodo Constant-force Tourbillon, the brand’s first mechanical complication watch. Its open work design reveals an intricately crafted tourbillon and a constant-force mechanism, combined as one unit on a single axis for the very first time in horological history;

Then there’s the “White Lion,” an opulent addition to the Grand Seiko Masterpiece Collection. Inspired by the beauty of the ferocious white lion, the timepiece is clad in Sparkling diamonds, black spinels, white gold, and Platinum 950—among other finishing details that make this watch, a limited-edition piece of which only five will be made, a collector’s dream.

And even in their more “accessible” offerings at Geneva, Grand Seiko thrives at what they do best: refining and elevating even the smallest detail—or even those hidden in plain sight. This design philosophy is best seen in the Evolution 9 Style, which introduces five new timepieces that made their debut at this year’s Watches and Wonders.

But before we delve into those new additions, let’s first learn the basics of this design philosophy.

The 44GS: The Grand Seiko Style

It was in 1967 when Seiko released the 44GS—the timepiece that defined the aesthetics of all Grand Seiko watches moving forward. From this watch, three definitive design philosophies emerged:

First, utilize flat surfaces and two-dimensional curves; second, make the flat surfaces of the case, dial, and hands as wide as possible; and third, ensure that the surfaces have a mirror finish and are distortion-free.

From these three guiding principles, nine design elements emerged, which now comprise the “Grammar of Design” of Grand Seiko watches. The official Grand Seiko website lists them down as follows:

The Evolution 9 Style: a homage, an upgrade, an innovation

Over five decades after the debut of the 44GS, Grand Seiko introduced new design principles through the Evolution 9 Style in 2020.

Similar to the three original aesthetic philosophies of the Grand Seiko Style, the new line introduced three “evolutions” to the “Grammar of Design:” evolutions in aesthetics, legibility, and wearing comfort. These were crafted according to the demands and tastes of today’s watch wearers.

According to the brand’s official website, the Evolution 9 Style timepieces inherited the original flat dial and curved side profile for the case.

The upgrades done to the original design elements include a double or greater width index at 12 o’clock, deep middle grooves for all indexes, a multi-faceted minute hand that reaches the minute track, an hour hand shape distinct from the minute hand, and a multi-faceted case made of a flat upper surface with a hairline finish and a distortion-free flat mirror finished surface.

Meanwhile, the new additions to the Style include a bracelet width that’s at least half the diameter of the watch, a watch case with a lower center of gravity, and a stable bracelet with improved thickness. These all run in line with the third “evolution,” which is all about wearing comfort.

The Evolution 9 Style expands into sport

With all these design elements present in every Grand Seiko watch, what then sets apart a particular timepiece from its fellows are its function, composition, and distinct details—all of which are paid particular attention to be the new five sport watches in the Evolution 9 collection.

One of the Spring Drive GMT timepieces in particular stands out for its dreamlike design, which Grand Seiko positions as an experience that’s as close as possible to the nature of time itself.

It bears a light gray dial with an intricately textured pattern, inspired by the winter morning mist in the Shinshu region—the home of the studio where all Grand Seiko Spring Drive watches are made. Add the “no tick” movement of the second hand thanks to the Spring Drive, and you have a watch that works as serene and smooth as the passage of time.

The new Spring Drive GMT is also available in a simple black lacquer dial. Both variants measure at 41.0mm in diameter and 13.9mm in thickness.

Grand Seiko also reveals two chronograph GMTs, one in a blue dial and one in black. Both measure 45.3mm in diameter and 15.8mm in thickness.

The blue variant ​​is adjusted to achieve an enhanced accuracy rate of ±10 seconds per month, in commemoration of the 15th anniversary of the Grand Seiko Spring Drive Chronograph. In addition to the 12-hour chronograph, the watch also features a rotating bezel and a GMT hand to enable it to display a third time zone.

Meanwhile, the second chronograph features a black dial and delivers an accuracy of ±15 seconds per month. In every other respect, it has the same design and specifications as the limited edition.

The last Evolution 9 Style piece this year is also perhaps the most captivating in its subtlety: a Spring Drive Diver inspired by one of the largest ocean streams in the world, the Kuroshio Current, known as the Black Stream. Flowing northward past Japan toward the North Pacific, its dynamic and sometimes violent tides inspire the deep black color and intricately textured surface of the dial of this 200m diver’s watch.

The watch has a diameter of 43.8mm and a thickness of 13.8mm. It also offers an accuracy rate of ±10 seconds per month and a 5 day power reserve. The inner section of the rotating bezel is made from  ceramic to protect the watch from being scratched.

All the new Evolution 9 style timepieces are made with high-intensity titanium cases and bracelets, which is about 30% lighter than stainless steel and brighter in color. The hands and indexes are coated with sufficient Lumibrite to further enhance the legibility of the time at night. The crown guard is carefully designed to avoid being caught by sleeves in both sport activities and everyday use.

If there’s anything that these new Evolution 9 Style watches emphasize, it’s that the design philosophies espoused by the 1967 44GS are versatile and as relevant as ever. It continues to influence and adapt to the demands and preferences of today’s watch aficionados, while keeping the core principles of the “Grand Seiko Style” intact and distinct.