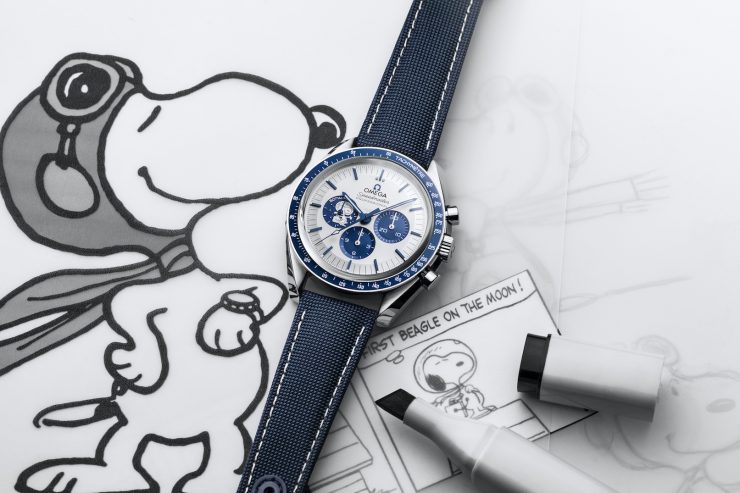 What do a watch, a cartoon dog, and an explosion in space have in common? They’re all part of a historic moment for mankind.

More than fifty years ago, on the 11th of April, the Apollo 13 mission was about to head to the moon. It was supposed to be the third manned lunar landing at the height of the Space Race. But the crew would never make it to their destination.

It was an explosion in one of the oxygen tanks. That was when things had started to go wrong.

Up until that point, everything had been going smoothly. The Saturn V rocket had taken off successfully, and 200,000 people had come to watch the launch at the Kennedy Space Center in Florida.

Jim Lovell, Jack Swigert, and Fred Haise—the astronauts of the Apollo 13—were on their way to make history for the third time. But two days into the mission, more than 300,000 kilometers away from Earth, the team had heard the explosion.

Over the comm lines, Swigert sent a message to NASA’s mission control center in Texas: “Okay, Houston, we’ve had a problem here.”

With one of the oxygen tanks ruined, the air and power steadily dwindling, the original objective of landing on the moon had to be abandoned. There was now only one goal: to get all three astronauts safely back home.

The three astronauts piled into the Lunar Module, the smaller spacecraft that they were supposed to use to get to the surface of the moon from the main Command Module. This was going to be their shelter while they saved their remaining fuel to get back home. It was their best chance for survival, since the Lunar Module had a working oxygen supply. They settled down in the cramped space, and shut down nearly all power to save it for re-entry.

But the problem was, the Lunar Module was only designed for the moon landing itself,  meant to be used by only two people for less than two days. The Apollo 13 astronauts would have to stay in it for about twice that length of time and add another man into the bargain.

The astronauts had to manually guide the course of the lunar module, because it was never designed to be used this way. Supplies also had to be rationed. And another problem was that carbon dioxide wasn’t being filtered out at a quick enough pace, since there were three of them on board.

NASA, working to keep them alive all the way from Houston, had come up with an improvised filtration system that used improvised materials from the lunar module. And so the crisis was again averted. For a while, anyway. But the most crucial part was about to come.

In the final stages, as the astronauts prepared to head back home, their course had drifted off by about 60-80 nautical miles. This would put them at the wrong angle for re-entry, and would send them hurtling back into space.

Now here’s where the watch comes in. NASA astronauts are issued an Omega Speedmaster as part of their kit. It started in 1964, when NASA sent out a call to watchmakers for a timepiece that would be sanctioned as regulation equipment for their astronauts. Among the few watchmakers who sent in samples, it was the Omega Speedmaster that was chosen.

The Speedmaster was no stranger to space. Neil Armstrong and the Apollo 11 astronauts had taken it with them during the very first moon landing. Buzz Aldrin had even worn his on the lunar surface itself (you can read all about it in our story here, where we watched an archived broadcast of the first journey to the moon on its 50th anniversary).

While the Speedmaster had held up in the vacuum, Swigert and the Apollo 13 astronauts would need something else from it entirely. They would need it to time a critical 14-second engine burn. With the Speedmaster on his wrist, Swigert prepared to execute the burn.

“We used the Omega watch that Jack had on his wrist and I had to control the spacecraft. Jack timed the burn on the engine to make that correction to get us back home safely,” Commander Jim Lovell would later say.

The maneuver, thankfully, had worked. After spending days in space living in an improvised lifeboat, facing hurdle after hurdle, the astronauts were finally on their way home.

On the 17th of April, 142 hours and 54 minutes after launch, the Apollo 13 splashed into the South Pacific Ocean. From then on, the mission would be known as one of the greatest successful failures in history.

So what does Snoopy, the cartoon dog, have to do with all of this? Well, NASA has this thing called the Silver Snoopy Award, and it takes the form of a silver lapel pin with Snoopy in an astronaut suit. The pin has also flown in space, borne by a Space Shuttle mission, before being given to those who have earned it. Snoopy is NASA’s unofficial mascot, because of his ability to “keep things light in serious situations.” And in this case, Omega was granted the Silver Snoopy for its crucial role in the ordeal.

Since then, Omega has kept the Snoopy connection alive, releasing several Snoopy watches to commemorate the mission’s milestone anniversaries. The most recent of these watches is the Speedmaster “Silver Snoopy Award” 50th Anniversary timepiece released in 2020. It features the famous beagle on a medallion on the dial, as well as an exclusive caseback that features Snoopy flying in orbit around the moon.

While these watches are a fun tribute to the mission and what they represent, they’re also reminders of Omega’s role in space exploration for almost 60 years.

The Apollo 13 mission was a feat of human ingenuity. Mankind had gone to space, faced disaster, and stared it down with the work of their hands and minds.

More than 50 years to the date of their return, and we’re in a different sort of crisis—the COVID-19 pandemic. But it’s during these times when we encounter the greatest threats that humanity comes together to face them. We’ve done it before, and we’re going to do it again.