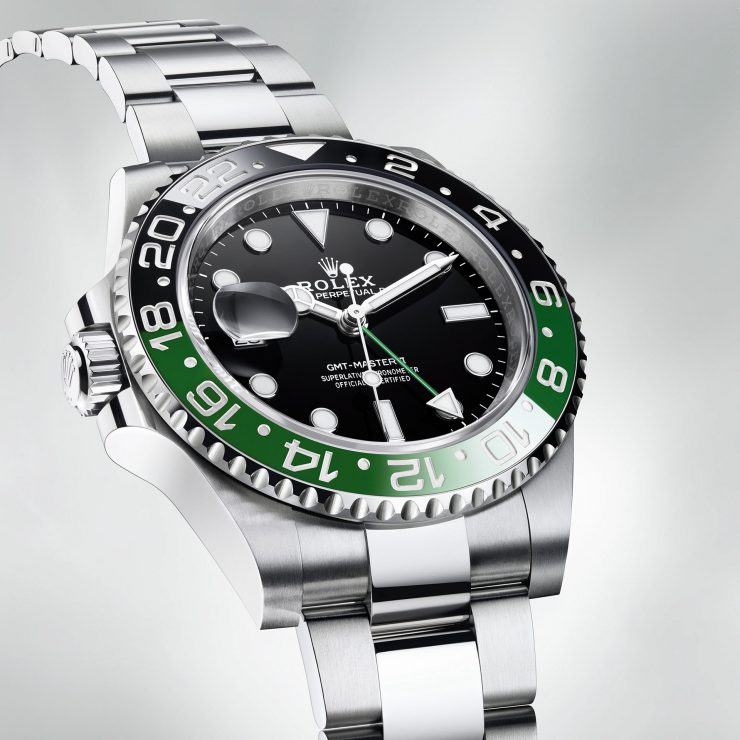 They’re the two most talked about Rolexes in this year’s show.

It’s well into the afternoon in Makati as I head into the hotel where Rolex is presenting its new models. Right now, Watches & Wonders—one of the watchmaking industry’s largest trade shows—is still in full swing in Geneva. But back here, in Makati, Rolex is holding its own sort of expo.

Today, they’re showing us their new models in person, and we’re going to get to try them on, have a look, get a feel. And I have to say, after two years of basically staying indoors, getting to see the new watches in the metal is a prospect that’s hard to pass up. Especially the Rolex ones, after everything we’ve seen and heard online.

In the first days of Watches & Wonders, Rolex made waves in the watchmaking community by revealing an unusual release: a left-handed model of the GMT Master II. Coupled with a green-and-black bezel in ceramic—a colorway that’s specific to the model— it’s a watch that definitely stands out. Over social media, on Youtube, and across practically every digital platform that covered watches: this was the big news, and for good reason.

Rolex isn’t exactly known to stray too far from their established design codes, and they rarely ever break the mold. It’s a philosophy that banks on the familiar, and one that has also allowed them to maintain a cohesive identity throughout their hundred-odd years. A modern Submariner, for example, still looks like a Submariner from decades ago, with a few changes here and there. This is partly why they’re so popular with collectors: a Rolex will always look and feel like a Rolex, even decades down the line.

Except, of course, for the new GMT Master II. It’s like an entirely new Rolex. Familiar, yes, but also extremely different.

As I sit through the presentation, Brahim Drissi—the General Manager of Rolex Philippines—walks us through the new models. Aside from the GMT Master II that stole the show, there’s also the new Air-King (we’ll get to that later). As Brahim wraps up, he invites us into a larger room, where the models are currently on display. This, of course is the highlight of the day.

The GMT Master II is a curious watch. Looking at it is an unusual experience—the crown is on the left, as are the date display and the cyclops lens. And to say nothing of holding it in your hands. Once you pick it up and strap it on your wrist (I start by wearing it on my right), the differences become more apparent. It feels different, especially if you’ve never worn a left-handed watch before (which I haven’t).

But set aside the fact that it’s a left-handed watch for a minute and you’ll notice that all the usual modern GMT Master II features are there: the 40mm case in Oystersteel, the arrow-tipped hand for the GMT complication, and the dual-colored bezel with a 24-hour scale. It’s also powered by the same movement—Calibre 3285—though it’s been modified to accommodate the left-side crown and the date display. And naturally, it can still tell the time across different timezones, which is what it’s meant to do. Still, it’ll take a while to get used to the new orientation. And maybe that’s true, even if you’re left-handed. Because there hasn’t been a left-handed model in the Rolex range in the modern age.

I ask if this was made specifically for left-handed people, and not something that was done to keep the crown from hitting the back of your hand (like some pilot watches). They answer that yes, this is especially made for them. It’s a curious move, given that left-handers make up about 10-12 percent of all the people in the world. So this will give you an idea of how many of these will be made at a time.

In any case, I think it’s a great thing that they got a nod from the Crown. At the very least, it opens up a whole new way to wear their Rolexes. That being said, you don’t necessarily have to wear it on the right wrist. It’s going to be just fine if you wear it the way you normally do. Only, it may take some getting used to if you want to adjust it while wearing it.

But the GMT Master II isn’t the only watch that’s notable for its new look. The Air-King gets a refresh as well. While the changes aren’t as drastic, they are still quite noticeable.

The Air-King has always been a sort of understated watch. It was released in the 40s as a way to commemorate the pilots of the British Royal Air Force after the Second World War. It’s managed to acquire its own following throughout the years, though less popular than the Submariner, the Daytona, and the Explorer.

Up until now, the modern incarnation of the Air-King was a timepiece that could (with the right styling) pass for both a dress and a sport watch. It was a little bit of both, to be honest. It would pair nicely with a vintage Ike jacket and denim, and perhaps a sport jacket and wool trousers, though it wouldn’t do it quite as well as a Datejust. But the new Air-King sets the line more firmly in the sport category with the new tweaks to the design.

The  biggest change to the Air-King is that it has crown guards now. These give the watch a more aggressive profile. And what it now loses in versatility, it makes up for by having a much stronger identity.

Another small change that’s hardly noticeable is that they added a “0” in front of the 5-minute marker (it now reads “05”). The previous Air-King simply had a “5” and had always felt strange, since the rest of the markers (apart from the 3, 6, and 9 hour markers) all had double digits. This has the effect of making the dial more balanced.

I walk over to the case that holds the new Air-King. And while we didn’t get to try it on, seeing it  live made me appreciate how much of a change the small tweaks made. It’s still at 40mm, but this feels like a much more cohesive (and more desirable) Air-King. A subtle, but significant departure from the previous version.

These two new watches are something of a surprise, especially when you think about them in terms of the conservative Rolex ethos. While the GMT Master II and the Air-King are familiar and do still carry the general aesthetics of the Rolex range, they’re just different enough to feel new. And sure, the GMT Master II is technically a new watch, and the Air-King now sits more firmly on the sportier side of things, Rolex is showing us that you don’t have to break the paradigm completely to create something new. And if this is the direction that the Crown is taking, then it’s easy to say we can all look forward to what comes next.