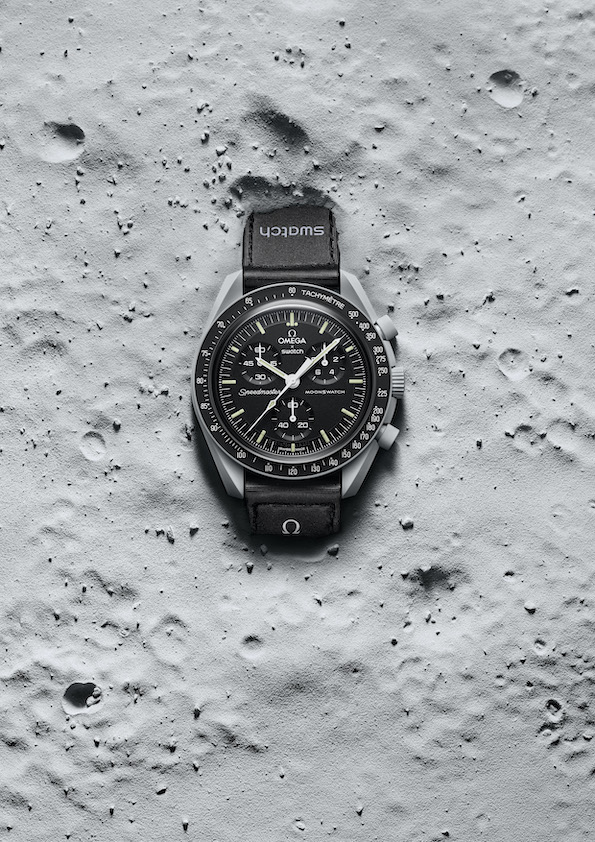 It’s a collaboration that nobody expected. And it makes the Speedmaster accessible to a new generation of watch enthusiasts.

With this year being the Speedmaster’s 65th anniversary, you just knew Omega had something up their sleeve. But nobody was expecting this.

Just a few days ago, Omega posted something on their Instagram. It was short video that read “Omega X Swatch 26.03.22,” followed by a series of photos of each planet, the sun, and the moon.

That didn’t leave much for any of us to go on, but today’s big reveal ended all the speculation. The Omega X Swatch “Moonswatch” is a landmark collaboration between two giants in the watchmaking industry. It’s a recreation of the iconic Omega Speedmaster (the watch that went to the moon with the Apollo 11 mission) that’s been made in the Swatch ethos.

But Omega and Swatch have gone to great lengths to make sure the collab would go beyond the surface and create a watch that would speak for them both. So basically, these aren’t just watches with both brands slapped onto the dial and a few original touches here and there. They’re actual, real Speedmaster-derived timepieces that have gotten the Swatch treatment.

The Moonswatch takes inspiration from outer space, something that the Speedmaster has plenty of experience with, being part of the official gear of NASA’s astronauts. Each watch is called a “mission,” and each mission has a different destination in outer space. There are 11 missions in total: nine for each of the planets, one for the sun, and another for the moon.

Many of the details of the Speedmaster have been included in the design. The Moonswatch has an asymmetrical case, and sports a functioning chronograph, with three recessed subdials: the signature Speedmaster look. The co-branded dial displays the logos of both Omega and Swatch at the top, while the Speedmaster and Moonswatch logos appear in the middle. It also has a tachymetre bezel with the familiar red dot on the 90 mark.

The 42mm case is made of Bioceramic, which is a proprietary mix of two-thirds ceramic and one-third material derived from castor oil. So while it isn’t the stainless steel we’re used to, this material allows the collection to sport a range of colors that have never been seen on a Speedmaster case. Holding it on the wrist is a velcro strap that’s reminiscent of the ones used by astronauts, giving it a utilitarian-chic look.

Overall, it’s a playful take on a legendary watch, and one that makes it accessible to a new generation of collectors. It’s a chance for people to get in on part of the Speedmaster’s history, while possibly introducing them to the greater watchmaking world. And for the price of a Swatch, we’re not really seeing a downside here. The only problem would be having to pick out your favorite mission.