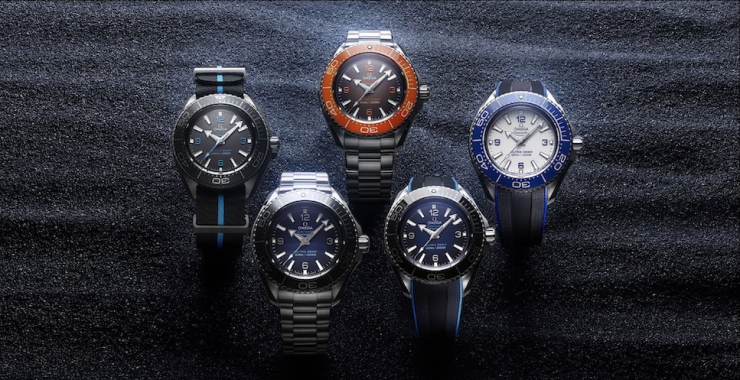 The Seamaster Planet Ocean Ultra Deep is likely the world’s most waterproof production watch. And the story begins with an expedition to the deepest part of the world.

It’s halfway in the morning in Bienne, where the Omega headquarters stands. And in the middle of it all, Raynald Aeschlimann greets us warmly, getting ready to talk about everything they’ve come up with so far in the year.

Raynald, he’s the CEO of Omega, and he seems genuinely happy to see us all, even if it’s through the screen of a Zoom meeting. And he has every reason to feel good about today.

Just yesterday, the watchmaking house launched Omega Days—an event that celebrates the Omega spirit. It’s also the launch of their new watches, something we’d only seen in a video preview last night.

Behind him, watchmakers in white lab coats mill about, working their magic on some mechanical thing or another. But this isn’t all of them, Raynald mentions. It’s the carnival season in Bienne, so some are still having beers outside. Raynald notes that this is a good thing, that they should enjoy a little. And after yesterday’s display, it’s clear they’ve earned every single bottle.

All of the major collections under the Omega banner have seen a new entry this year: the Speedmaster, the Seamaster, and the Constellation. But there was one particular watch that stole the show: The Seamaster Planet Ocean Ultra Deep.

Revealed at the event, the Ultra Deep is a technical milestone, able to withstand depths of up to 6,000 meters (roughly 20,000 feet). It is currently Omega’s greatest achievement in the field of diving. And just to be clear, it is also likely the world’s most waterproof production watch.

This isn’t just something they figured out in the labs. Years before the Ultra Deep even went into production, Omega decided that the best way to test the idea was to do it in the real world. And what they ended up doing was this: they strapped the concept watch to the outside of a submersible then sent it straight into the depths of the Mariana Trench.

You just have to admire the audacity of that plan.

But there’s a bit of a story behind it. And that story begins in the same place where Raynald is sitting right now. Right in the heart of the Omega headquarters.

Raynald begins to tell us of the time he met with undersea explorer Victor Vescovo. Back then, Victor had been planning a trip down Challenger Deep in the Mariana Trench: the deepest part of the world.

“We’re talking about his life and what he’s done,” Raynald tells us. And this is where Raynald goes: “Victor, we are the brand for this. I want Omega to be with you.”

And so it was settled: Omega would be joining Victor’s expedition to Challenger Deep. Over the years, Victor had developed a submersible vehicle capable of withstanding the immense pressure of the Mariana Trench and had named it the DSV Limiting Factor. Omega, for their part, worked night and day to match the submersible’s capabilities, coming up with a concept watch called the Ultra Deep. With everything in place, the team began preparing for the expedition.

By 2019, both the watch and the DSV Limiting Factor would be put to the test. Victor’s submersible went into Challenger Deep and reached 10,925m below the surface. Strapped outside of it was the Ultra Deep concept watch.

The expedition would later go on record as the deepest dive in the world, an undertaking that pushed the limits of both man and machine. And while Omega was no stranger to exploring the unknown—it had already been to the moon, after all—the maison could now claim to have visited both the deepest parts of the world and the heights of outer space.

The concept watch would later be used as the basis for the Seamaster Planet Ocean Ultra Deep production model that we’re seeing today. But getting it from concept to production wasn’t going to be easy.

“The Ultra Deep was the most challenging,” says Gregory Kissling, Omega’s Head of Product Management, as he speaks about the new collections. We had the chance to talk to him a short while before meeting with Raynald.

“It took us roughly two and a half years,” Gregory says, to take the Ultra Deep from concept to product.

They took what they had learned from the dive and translated it into something that could be appreciated by more casual wearers. To make the watch more wearable, Gregory and his team had to slim it down, and even developed a new steel alloy for most of the models in the collection.

Called O-MEGASTEEL, the alloy is brighter in tone than stainless steel, and seems close to white gold in appearance. Still, it does what it’s meant to and manages to keep the steel look while maintaining a high water resistance.

As for the the water resistance? It’s 6000 meters—roughly 20,000 feet. At that depth, the water pressure is about 7.5 tons. And think about that for a moment. That’s the weight of a fully grown elephant.

Despite the extreme water resistance, the Ultra Deep is relatively svelte for what it does, measuring 45.5 mm across and just a tiny bit over 18 mm thick. It is, by no means, a small watch, but nothing too out-there either.

They also gave it several colorways that would make it more appealing to people who wouldn’t be wearing it down the Mariana Trench (which is, to be honest, most of us). There are five versions of the Ultra Deep: four in steel, and one in titanium. They come in either a steel bracelet, a rubber strap, or a special NATO strap. The NATO strap is made out of repurposed fishing nets recovered from the oceans, so that’s a nice nod to sustainability.

It’s a watch that, as Omega calls it, “depth defying.” The 6000 meters of water resistance is likely more than you will ever need. But that isn’t the point. The point is to mark one of the most daring expeditions in recent history. And that’s something people can actually get behind: the not-so-little watch that could. Likely the most waterproof production watch in the world.

And in an age of Waze and Google Maps, it’s an exciting thing to see that the spirit of exploration is still alive. That not everywhere in the world has been mapped, and some things still remain to be found.

As we end the conversation with Raynald, we ask him a few more questions, and our time with him is up. He tells us what it’s like to be here, in Omega, at this time, when they’ve just made a breakthrough. He tells us that Omega was here before we were born, before he was born, though it is, to him, “still so fresh.” And I suppose what he means is that, even after nearly 200 years, there are still things to be discovered.

And just like this new breakthrough, that probably is—and will likely always be—the point.