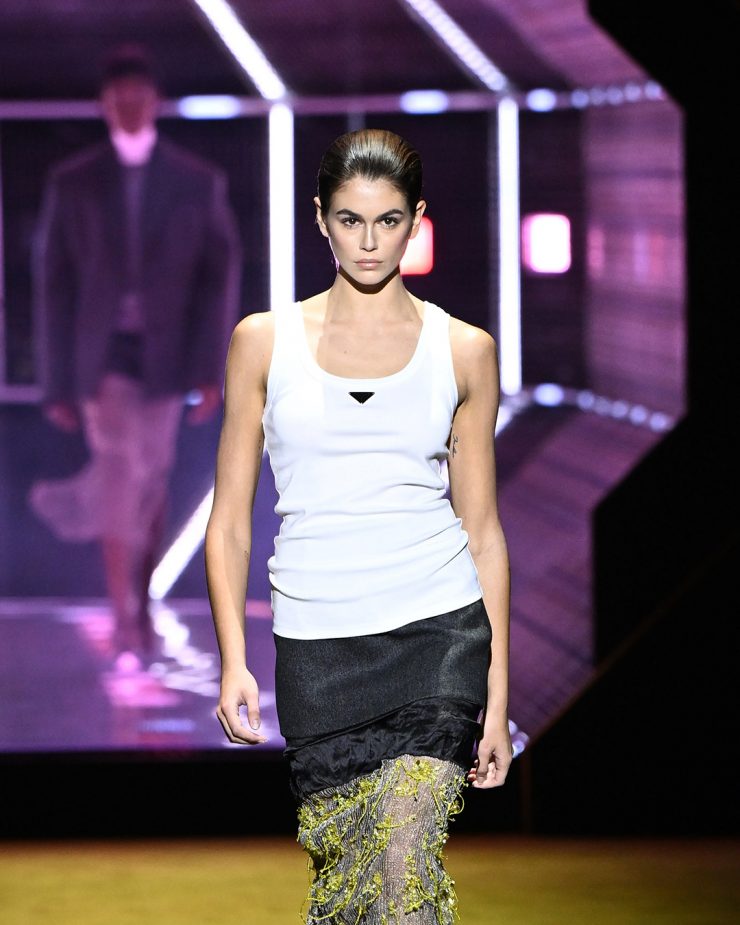 Is the white tank top—the epitome of casualness—having a moment?

At this point, I shouldn’t be surprised anymore by the outfits that today’s designers send down the runways of the world’s major fashion weeks. However—and as evidenced by my quick chat with our design director about Milan Fashion Week—we couldn’t help noticing how “casual” some of the looks were in some of the shows.

Now, this isn’t anything new or derogatory per se—it’s just that we couldn’t get over Kaia Gerber opening Prada wearing a white tank top, for instance. (This isn’t even the men’s fashion week, but we just had to look at the shows because of that.)

More than “casual,” it was also noticeable that the brand revived not only a few prints and silhouettes from their 90s “pretty ugly” concept—using unexpected prints and “off colors”—but also casted a few iconic models who walked their runways over two decades ago: Erin O’Connor and Liya Kebede, among other new faces like Euphoria star Hunter Schafer.

Our snooping led us to Glenn Martens. We previously gushed over his eye-catching prints and silhouettes at Y/Project’s FW2022 Collection and his collaboration with Jean Paul Gaultier in our roundup of Paris Men’s Fashion Week. Now, in Milan, he’s taken another casual element—denim—both to another level of dressing and back to a Y2K-inspired aesthetic.

The exaggerated volumes hark back to Martens’ previous work, but there’s that added ruggedness and nostalgia being evoked by distressed denim. And yes, there were white tank tops, too.

And yes, the humble tank (but made of leather!) also makes an appearance at Bottega Veneta. The man of the hour, Matthieu Blazy, presented a remarkably toned-down version of the Italian brand—at least, compared to the work of the house’s former creative director, Daniel Lee.

Asked about the show, Blazy remarked that Bottega Veneta has always been a pragmatic brand, being a leather goods company first and foremost. The new creative director is pulling all the stops to present a more timeless vision of the brand—a complete departure from his predecessor.

“I kinda miss the old Bottega, though,” our design director told me. He is not alone, though—the craze that Lee’s “Bottega Green” caused, among other design cues he introduced, took many celebrities and influencers by storm, even if the brand chose to shut down their social media accounts not too long ago.

But there is reason to look at Blazy’s work with the brand moving forward: the front row of the show was quite a powerhouse: another Euphoria star, Jacob Elordi (who was featured previously in our MANTLE Edit, and who sported a Leather Pillow bag from the Italian House), British Vogue Editor-in-Chief Edward Enninful, and designer Raf Simons were in attendance.

Taking cues from Blazy’s vision, it will be interesting to see how the white tank top—among other indicators of casual (and casual cool, perhap)—will continue to influence the stronger trend toward ready-to-wear, pragmatic dressing with a bit of flair, and going back to basics.