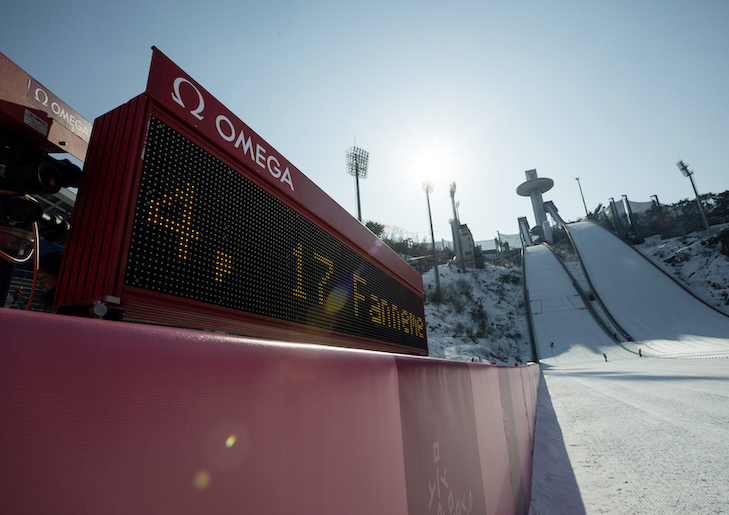 Omega has been the official timekeeper of the Olympic games for 90 years. And throughout this period, it’s been moving athletic timekeeping forward.

With the Beijing Olympics currently underway, people across the world are waiting for the new champions to be declared, each winning athlete taking home a milestone for their country. The event itself is a milestone for Omega as well, marking the 30th time that the Swiss watchmaking house is participating in the games.

For the past 90 years, Omega has been the official timekeeper of the Olympics, starting out with the Los Angeles Summer Olympics in 1932. During that event, it sent a single watchmaker from Switzerland, and with him were 30 stopwatches—the official timepieces for the 1932 games. Each one was equipped with a split-seconds chronograph, which could time two separate events at once. They were about as sophisticated as chronographs could get at the time, and would set the tone for Omega’s relationship with the Olympics for the decades ahead.

This year in Beijing, Omega is fielding a team of 300 timekeepers and over 200 tons of equipment: a far cry from their first venture in 1932. But the house is no stranger to milestones in the winter Olympics. Here’s a quick look at what Omega has introduced throughout the history of the Winter games.

1936 was the first year that Omega officially timed the Olympic Winter Games. With a single watchmaker and 27 stopwatches, the brand successfully measured the time at Garmisch-Partenkirchen.

Omega began to use revolutionary technology called photoelectric cells. These  automatically stopped the clock on the finish line, making them more accurate than relying on human reflexes. During the summer events that same year, OMEGA also introduced its first Photofinish Camera at the Olympic Games.

This was the first time that OMEGA introduced starting gates in alpine skiing at the Olympic Games. Making their début in Cortina d’Ampezzo, the gates signaled the beginning of each run. As soon as the athletes passed through, the OMEGA Quartz Recorder was triggered.

This was when Omega began to superimpose the times of Olympic Games performances onto the bottom of television screens. Using a new piece of technology called the Omegascope, this display allowed viewers to see the timing of the events as they happened, making them more engaging. From this moment in Innsbruck, the concept of “real-time” sports reporting had begun.

Omega introduced “Integrated Timing” at the Olympic Games. With events taking place in Grenoble, the Omega team was able to supply the press, media, television channels, judges, and the general public with information and staitsics on athletic performances as. The Omegascope was also updated and could now superimpose complete competition details onto television screens, including athlete names, live times, final times, intermediate times, and even speeds.

Omega introduced its Game-O-Matic technology in the Lake Placid games. It was a system that could immediately calculate and display an athlete’s ranking as soon as they went through the finish line in alpine skiing events. The Game-O-Matic featured its own data processing equipment, enabling the Omega team to quickly relay the results.

Omega introduced its new Scan’O’Vision system in Albertville. Photofinish cameras had been used in the past Olympic Games, though the updated technology could now digitally measure times to the nearest 1/1000th of a second. This improvement in precision was a remarkable one, and became a milestone for sports timing.

Omega introduced special transponders that could be worn by athletes. They were primarily used in the new team pursuit event in speed skating and competitors wore the transponders on their ankles. The transponders would then send and receive radio signals, allowing Omega to capture specific time measurements for each one.

Vancouversaw the introduction of the new Electronic Start Pistol. Instead of using a traditional gun, Omega introduced a device composed of a flash gun and a sound generation box. Upon pressing the trigger, a sound is “played,” a flash of light is emitted, and a start pulse is given to the timing device.

Sochi saw the arrival of the Whistle Detection System in the Ice Hockey events. This was something worn by officials, and the microphone in the system allowed them to speak to the scorekeeper on the timing bench. The system also stopped the clock as soon as it detected the sound of a referee’s whistle, making it more accurate than relying on human interaction to stop the time.

In PyeongChang, Omega ushered in a new era of motion sensor and positioning systems. In particular events, the timekeeper could now measure more data from athletes, such as their live speeds in races and live heights during jumps. With this new system, it was easier to observe how an athlete performed, as well as how exactly they won or lost. This also gave a much better understanding of each sport. Not only for the officials, but for the viewers as well. And as the technology for timing the Olympics continues to evolve, so does our understanding of the human body and what it can do.