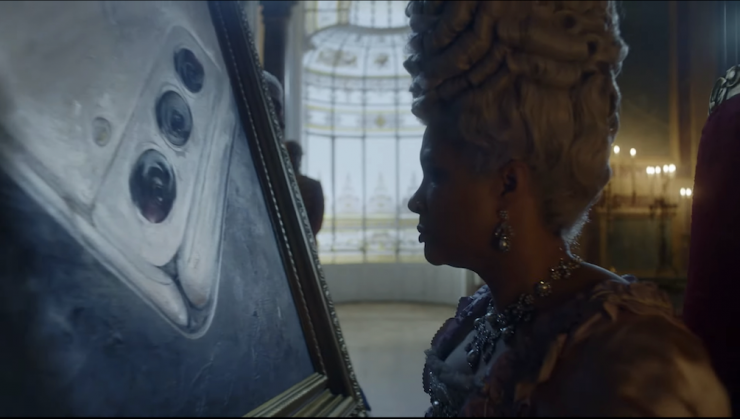 Samsung’s Galaxy S22 announcement is the unexpected tech collab of the year.

The quirky release video was made in collaboration with the Netflix show Bridgerton, which isn’t exactly the first thing that comes to mind when you think about tech. Set in Regency-era London, Bridgerton is an alternate history series featuring royals and nobles navigating through society and their love lives. Kind of like a powder and petticoats version of Gossip Girl, though it’s really more complex than that.

The video opens with the queen presiding over an ‘inventor’s ball.” First up is Lord Macintosh with an unimpressive presentation for a raincoat (and you can guess who they’re taking a dig at here). The queen waves him away and in comes Lord Tristar (note that Samsung means “three stars” in the Korean language).

Tristar presents the S22. Well, a few paintings of the S22, in any case, and tells her it’s a   correspondence device that produces moving pictures. The queen has her staff rotate the paintings around her for effect and asks Tristar when the finished product is going to be available. To which, he answers: about 210 years (though he quickly corrects it to 209 after a death stare from the queen).

It’s certainly unusual for a tech launch. Luckily, for the rest of us not in Regency-era times, the S22 series is set to be released soon.

And if you didn’t get to catch the launch, here’s the whole video: