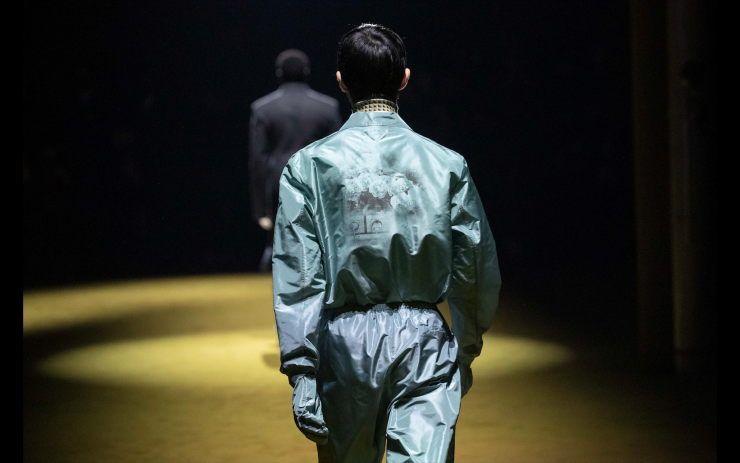 The past year has forced people all over the world to reflect on the fragilities of being human. And when faced with the notion of survival: vigor, idealism, and fearlessness are a few of the words one might associate with the idea.

These sentiments manifest in every generation and in every season of fashion, and you can particularly see them in this one. The themes are usually explored in two broad directions: firstly, through representation in youth; and secondly, through experimentation. And while suggesting the specific concerns of the times, Milan Men’s FW 22 also  addressed and overcame this divide.

At Prada, garments exemplify a constructed modernism serving to define shape in the form of boiler suits and hulking coats.

The pragmatic clothing, or “uniforms of reality” are reimagined in precious fabrics laid out with the language of sartorial tailoring. Perhaps as a contrast to the structure, these pieces are worn by off-kilter Hollywood stars: Thomas Brodie-Sangster, Asa Butterfield, Damson Idris, Kyle MacLachlan, Tom Mercier, Jaden Michael, Louis Partridge, Ashton Sanders, Filippo Scotti and Jeff Goldblum.

Interestingly, we are living in the age of Zegna’s Artistic Director Alessandro Sartori and his take on (re)tailoring and rebranding.

“I keep looking at the world through the Zegna lens. The reality we live in today requires adaptability; it asks us all to be fluid. Translating this idea into clothing means building a language of shapes and textures that grows and consolidates over time, matching the needs of the moment. The notion of the hybrid is one I keep exploring, because there’s progress in erasing staid categories,” he says.

This curatorial approach takes into consideration both the micro- and macro- histories embedded in utilitarian jackets and tabarro coats done in earthy orange. Individually, each piece, especially the crisp whites, provides insight into the cohesion of a modern man.

At Fendi, the portrayal of something much starker lies with their reimagining of a gentleman’s wardrobe with a neo-dandy riff on perennial classics. In this line, we’re presented with blazers that explode into flat capes and scooped jackets.

Relocating from Paris to Milano was a win for 1017 Alyx 9SM, the brainchild of Givenchy womenswear designer Matthew Williams. The show was staged in the sacred chapel of the Chiesa San VittoreThis season he bound menswear and womenswear together with wet-look outerwear. It’s construction details are obvious upon first glance but technical upon closer inspection.

Taken together, FW22 tells a layered story of Milan’s response to the baggage of history and contribute their voices to the discourse while pondering on the invisible threads of the past, present and the future.

Overall, Milan was a textured journey into time, a fitting reflection of the world we live in. The things of the past get brought back to life, and pragmatism is the root of each movement.