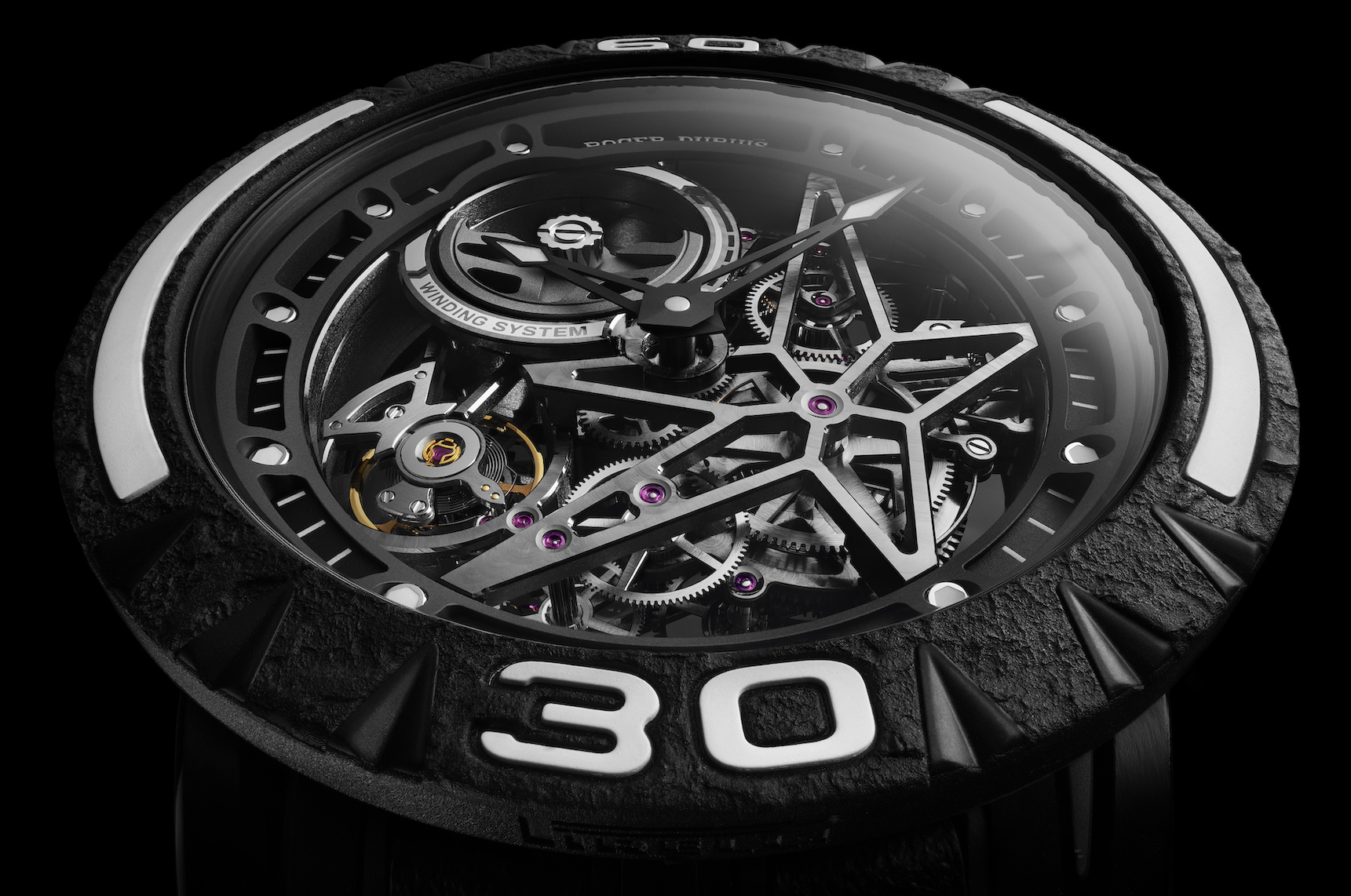 This watch goes off the beaten path and jumps right onto the racetracks.

Somewhere in Switzerland, we’re waiting under the shade of the Roger Dubuis booth. They’re just about ready to show us the Excalibur Spider Pirelli: a new timepiece that’s a collaboration between the maison and the motorsport tire brand.

At the center is a lounge done up in grey, the Roger Dubuis logo arches over us in a large sculpture, and a row of drinks has been carefully laid out on the bar (some of which, like the cognac and the sake, were made for Roger Dubuis exclusively). Outside, the sky is a fierce shade of blue, with sparse clouds across the background. Only, you can’t sit on the lounge chairs, or pick up the bottles, and the clouds haven’t moved in minutes.

Where we’re really at is home, exploring a virtual space made to recreate the lounge. And it is uncannily realistic: the world of Roger Dubuis, transplanted from Switzerland and straight into my office computer. But all of this exists in the real world as well. Just inaccessible at the moment. At least, for most of us, and only for now. Still, it’s great to be able to do this while we can’t actually be there.

Back on my screen, Laurent Toinet—the maison’s managing director for SEA and Southeast Asia—begins to talk about the watch. He opens a garage door to the left, and in it we see a Lamborghini, alongside the Excalibur Spider Pirelli.

“It’s basically the latest innovation that emerges from a very exclusive collaboration that we’ve built with Pirelli,” Laurent says. “And that shows what happens when the finest minds from different industries come together to share their know-how.”

Pirelli supplies the official tires for the Formula 1 races, and has been known to do extensive tests and research as to which ones would best be suited to the races. Roger Dubuis, on the other hand, is in the field of haute horology. And since its founding in1995, has largely been recognized for its whimsical, avant-garde approach to watchmaking. Having seen their work in several watchmaking shows, this is a level of fine watchmaking that would appeal to collectors and people with a bit of an edge to them. (Check out our story on their Excalibur Knights of the Round Table to see what we mean).

So what exactly do a watch and racing tires have to do with each other? Essentially, the Excalibur Spider Pirelli takes both of these worlds and fuses them together to create a highly collectible, and also highly unusual timepiece.

The watch is based on the concept of the pit stop. In motorsports, the pit stop is where a vehicle refuels, replaces its tires, undergoes spot repairs, and then goes on to continue racing. All of these have to be done as quickly as possible, given the nature of the sport, and the record so far has been 1.82 seconds (performed by Red Bull Racing in the 2019 Brazilian Grand Prix).

It’s the quickness and the modularity of the pit stop that the watch recreates.

Laurent walks us through the other features of the Excalibur Spider Pirelli, beginning with the strap. And what makes the strap unique is that they’re cut out of tires that have been used by motorsport-winning vehicles. The strap has a special treatment to make it skin-friendly, and at the back of it is a code that allows you to trace the specific tire used and the race that it ran in.

That’s actually pretty cool for motorsport  fans, who might want to hunt down winning tires from specific events.

The bezel, which resembles a tire, can be removed by turning it slightly, and can likewise be swapped out for a different one. Both the straps and bezels come in three additional colorways—red, white, and blue—each of which is only available in 88 pieces.

Laurent mentions that they’ve attempted to swap out the pieces as quickly as possible, and the record stands at 20 seconds so far. And while that’s 18.18 seconds more than Red Bull Racing’s record-making pit stop, it’s still far ahead of a strap and bezel change for a conventional watch.

Under the hood, the watch runs the RD820SQ, which is a skeletonized, automatic movement. A skeleton movement is one that has had a great deal of its material carved away, which allows the wearer to see as much of the interior as possible. The Roger Dubuis signature asymmetrical star emblem sits prominently up front, while the Pirell logoi can be seen on the crystal case back. The movement  itself bears the Poinçon de Genève (the Geneva Seal, an exclusive hallmark of quality), which marks it out as a true piece of haute horology.

“We are obsessed about reinventing the future of hyper horology,” says Laurent, “And we like to get off the traditional paths”

A watch that’s inspired by a pit stop and partly made out of tires, with interchangeable pieces using a one-click system? That’s certainly far from the traditional path, and jumps straight onto the racetracks.