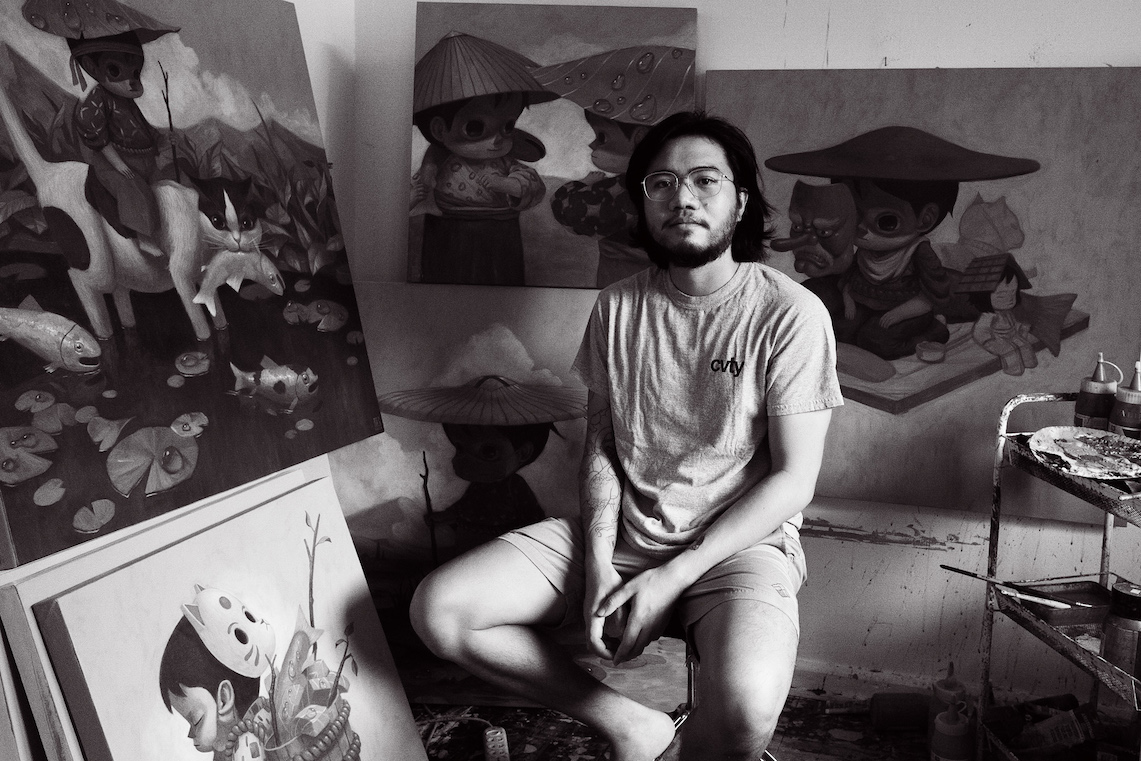 With sold-out shows and a schedule that goes all the way to 2023, this young artist’s work has become increasingly difficult to find.

If you were paying any sort of attention to the art scene during the past year, you would have quickly realized that one artist is getting quite a bit of buzz and sold-out shows. That would be Mark Santos—also known as “Mister S.”

It’s difficult to separate Mark Santos from his Mister S (which stands for Mr. Sasquatch) persona. Not after his early career efforts to brand himself as the street artist “Mister S,” or to promote his sushi-backpack-toting Mister Sasquatch collectible toy.

But it seems more likely that it will happen now. Mark Santos is squarely on track to build another identity: that of a contemporary artist. After successful shows in Cebu, Taipei and San Francisco, and successive sold-out shows in Manila, it might be said that the new “it boy” of art has arrived.

Having gone through the proverbial hardships endured by struggling artists, Mark Santos has earned the attention that he’s receiving. But he recalls a time when he had no cash in his pocket—he didn’t even have enough change to pay for a jeepney ride. At the time, he was relying on the continued support of his parents, who indulged his dreams and put their faith in his eventual success.

After earning a Multimedia Arts and Sciences degree at the Mapua Institute of Technology and trying his hand as a graphic artist, Mark decided to take the plunge as a full-time artist in 2014. He was fed up with the limitations he was experiencing in his initial path, and felt that he could be appreciated elsewhere. And so off to the art world he marched.

Small group shows in Nova, Secret Fresh, and Pineapple Lab came his way, and Mark got a taste of the international scene with participation in Art Kaohsiung (Taiwan) in 2016.  In 2018 and 2019, VoV selected him as part of its line-up for Art Fair Philippines, and that paved the way for even more shows with Art Underground, Galerie Roberto, and Qube. Small successes built upon minor gains, until the pandemic hit in 2020. But the virus wasn’t going to be an obstacle to the young artist, who went on to create chill canvases with surfboarding kitties and samurai critters.

There is a delicacy to his strokes that is visible not only in his oil and acrylic masterpieces, but also in his dainty aquarelles. Recurring themes of sushi, Japanese masks, and water droplets amidst rivers and roofs dot his canvases.

The purplish-blue-hued works that marked his earlier shows at Manila’s galleries, though, gradually transitioned to faded, somber pigments that carry only hints of rouge and mustard. Within 2020, and perhaps as a reaction to the utter confusion that brutally impacted everyday life, Mark began lightening his palette to atonal creams and not-quite-blush colors.

Thus, his exhibits in Space Encounters, Galerie Stephanie, Village Art Gallery and VoV showcased subdued color impressions, are more likely to evoke calm than to arouse excitement.  And upon reflection, he admits that’s exactly what he wants.

“Most of the time, I don’t know what my art means,” Mark says.” And I am having a hard time articulating it. That’s true until now. All I know is that I want to evoke a certain emotion or feeling. Usually, the feeling of calmness”.

Over the past year, collectors from China and Korea reached out using the Instagram posts of his friends as leads, begging for even just one painting. Cebu enthusiasts regularly knock on Qube Gallery’s doors (or website), counting on the slim hope that since Qube managed to feature him for two years running, it might have a wayward piece lying in its backroom.

The frenzy reached fever pitch during online sales of Art in the Park, where his watercolor sketches—too tiny to be of any consequence—were suddenly being retailed (and snapped up) for half the price of his larger acrylic paintings.

While his teenage dreams of being a street artist like AlexFace or Banksy have been parked for now, other dreams are being realized.   nd Mark wants to try his hands at new art forms, like ceramics.

“I want to add to my arsenal.  There are workshops in UP, and Pat (Frades, his partner) and I will enroll so we can gain that extra knowledge.”

Mark Santos has also since disclosed a major tidbit: he is all booked for shows until 2023. So there will be a new supply materializing from the mines. Though, as with all his other shows, even these pieces will likely be sold out on day one.

“I’m super pressured!  I have to make sure my next works are better than the ones before. But make no mistake, I’m still grateful,” he narrates gleefully.

When quizzed whether future works are still going to focus on his “Mister Sasquatch” character, Mark admits that he’s exploring the creation of new characters “so that it’s fresh to my audience.”  As of now, there are no hints as to what those new characters will look like.

Meanwhile, his existing characters have enough charm of their own to still hold attention.There’s the cat who’s always on a rained-out roof. There are round faced, big-eyed babies that are wandering around in Japanese robes or with plastic bubbles over their heads. And there’s the ubiquitous, red-roofed birdhouse that doesn’t seem to house any birds. (There are, however, plenty of frogs that pop up in streams and river banks).

It’s a safe bet that any characters that Mark Santos chooses to unveil next will most likely figure in collectors’ lists. And while we all wait for that to happen, Manila (and the world) will have to keep looking for the pieces that might still be out there.