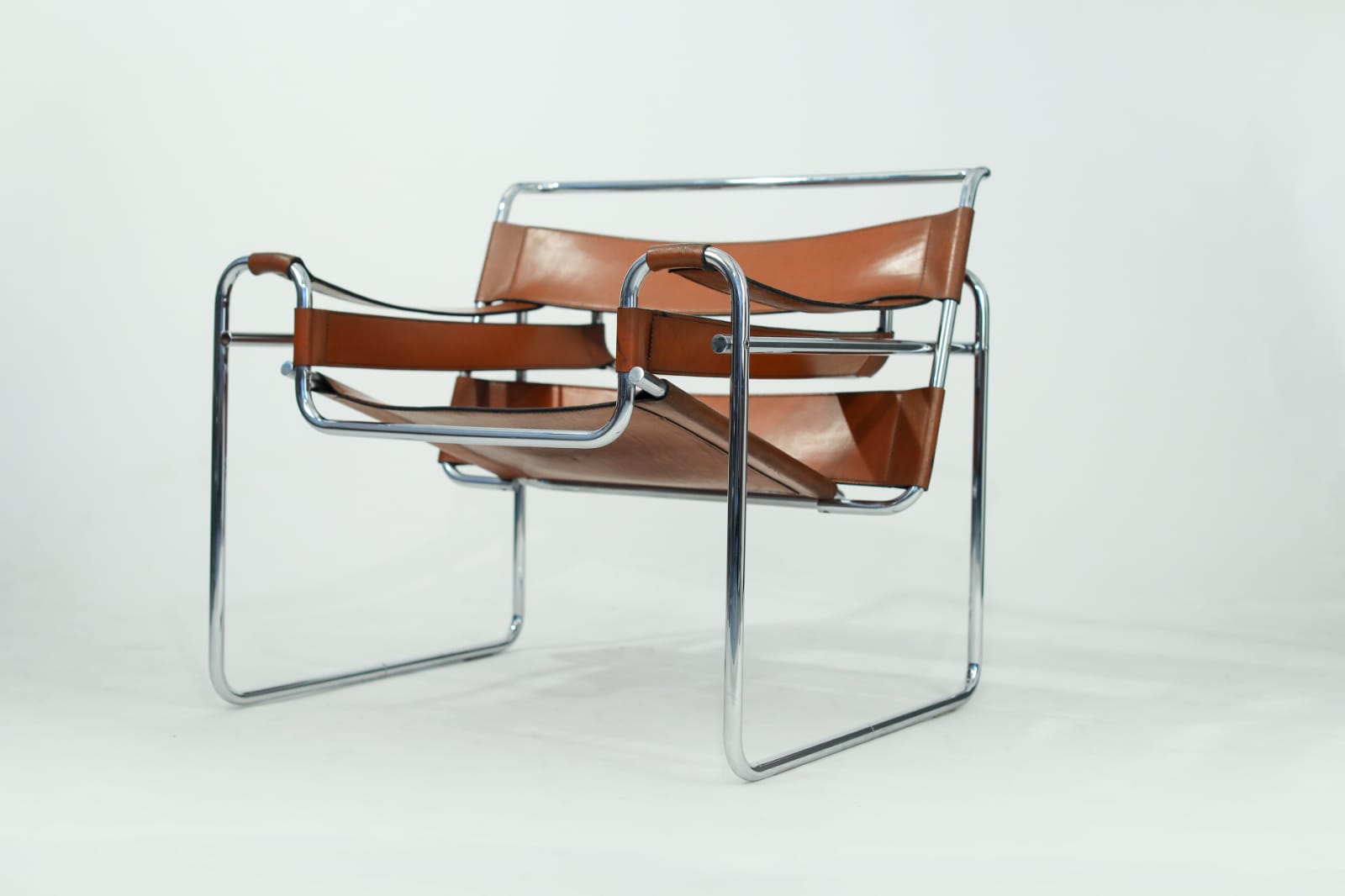 Around five years ago, Midcentury Manila founders Ken and Isa Mishuku received an intriguing online message from a Davao-based French man. The stranger owned a modern-looking chair that he wanted to sell, but he didn’t know what it was called. Upon seeing the photos in the message, the Mishukus immediately recognized the piece as a Wassily chair, an iconic mid-century modern creation. However, with only photos to go by, they couldn’t tell whether it was authentic or not.

“The French man was insisting that the chair was real. His asking price was also decent,” Ken recalls. He had a good feeling about the deal, however, so they pushed through with the acquisition, even if he had no idea if it were authentic and how he could get the chair from Davao to Laguna.

Serendipitously, one of the Mishuku’s helpers is a Davaoeña. At that time, when she went back to the province to visit her relatives, Ken asked her to pick up the Wassily chairs from their Frenchman acquaintance and bring them back with her to Laguna. When the pieces finally arrived, they couldn’t contain their excitement and nervousness as they opened the package. As they inspected the chair for markers of authenticity, the Mishukus breathed a huge sigh of relief—the Wassily chairs were real.

A quick note on the Wassily: also known as the Model B3 armchair, the Wassily is a Bauhaus design made by modernist architect and designer Marcel Breuer in 1925. These chairs were initially made with bent tubular steel and eisengarn (strong waxed-cotton thread) fabric. Decades after World War II, the Gavina Group acquired the licenses for a couple of Breuer designs, producing a new Wassily model using leather straps instead of eisengarn.

“These Wassily chairs became some of our most cherished possessions. I never found something like them in the Philippines after we made our purchase. I even told Isa back then that I was already content with this, and that I wouldn’t buy other pieces anymore. Of course, I broke my promise,” quips Ken.

The Wassily chairs figured into the Mishuku residence for a few years until the couple sold them to a friend. Now, these Gavina-produced chairs are up for grabs on the third day of the León Gallery’s online auction, happening from July 16 to 18. They join over a hundred other mid-century modern selections currently on display at the gallery, all from the Mishuku’s collection.

The gospel of mid-century modern

While it seems odd to let go of a piece that bears that much sentimental value—let alone feel elated about the idea—Ken and Isa admit that this is part of the collector’s journey. “When you are passionate about collecting, it never stops. You never settle for a certain piece or set a limit for your acquisitions,” Isa notes.  “However, you also have to recognize that your tastes and lifestyle constantly change. Eventually, you’ll have to let go of pieces that do not suit your preferences or needs anymore, and that is fine. Over the years, we’ve cherished and enjoyed many mid-century modern selections that are now in the homes of our fellow enthusiasts. We are all about sharing the love and allowing more people to enjoy these pieces.”

This mission to spread the gospel of mid-century modern furniture has always been the driving force behind their Instagram account, Midcentury Manila. What began as a simple page that documents their acquisitions and restoration efforts has transformed into a passionate community of over 21,000 followers. While the page functions as an avenue for sealing deals, the Mishukus remain steadfast in managing Midcentury Manila as a passion project and avenue for learning—for them, it has never been about profit or vanity.

With a diverse and harmonious collection spanning from clean Danish styles to space-age Jetsons-inspired aesthetics, it’s hard to believe that Midcentury Manila began as a result of clashing aesthetic sensibilities and home decoration disagreements. “Ken loves vintage guitars, so when we were deciding on the look and feel of our home many years ago, he wanted a man cave style where his collections could seamlessly fit in,” Isa fondly shares. She wasn’t buying the idea at all, insisting that their home should carry a more “modern” look. At that time, Ken thought that she was referring to weird contemporary furnishings.

Determined to build his man cave, Ken kept looking for items that aligned with his vision. One of his dream pieces was the Chesterfield sofa, a large British leather couch and a mainstay of gentlemen’s clubs and homes of royalty. Eventually, Ken got in touch with someone who imports used vintage Chesterfields into the country. When they visited the supplier’s warehouse to check their wares, an unexpected agreement (and compromise) happened.

“While Ken was in awe of the Chesterfields we saw at the warehouse, I was attracted to a couple of ‘modern’ pieces that were relegated to the corner. Even at a cheap price, no one was buying them, and the supplier admitted that these items were just used as ‘fillers’ to maximize container space,” Isa recounts. When she told Ken that these were the kinds of “modern” pieces that she liked, the couple had a design epiphany.

“Right there and then, I understood what she wanted—she wasn’t gunning for the ‘new’ or contemporary items, but for ‘Modern’ shapes,” Ken shares. (At that time, they still weren’t aware that Isa’s preferred selections were considered mid-century modern furniture.) “The chairs that Isa saw were vintage, but the shapes were ‘modern.” They also somehow worked well with the Chesterfield aesthetically, so we agreed to buy the sofa and a few of the pieces that Isa liked. Besides, they were selling these ‘fillers’ at a low price, so why not?”

The search for the Chesterfield thus became the way for Ken and Isa to discover mid-century modern furniture, and this is why the classic leather sofa occupies a space in the auction and a special place in Isa’s heart. “We do not have a Chesterfield at home anymore, so whenever I see one, I get reminded of the moment that sparked this whole collecting journey for us. While the Chesterfield may not be considered mid-century modern, we see its value and beauty and it works well with more modern pieces. That’s why we have a Chesterfield sofa here in the auction, and we hope that whoever buys it will cherish it as much as we do.”

Midcentury Manila’s online auction at León marks their fourth collaboration with the esteemed gallery. Previously, they have also worked with major furniture brands and fellow collectors to stage successful shows in Makati and Bonifacio Global City. The Mishukus continue to be astounded by and grateful for the demand and support for their well-loved pieces.

“Out of courtesy, we postponed selling our acquisitions when the pandemic began over a year ago. We had a warehouse filled with new and previous purchases, and we just couldn’t sit still; hence, we started taking photos of our stocks and uploading the shots on our Instagram page, complete with interesting details about the items. Basically, business as usual, just without selling,” Ken shares.

As they went about maintaining the page, the Mishukus observed a spike in inquiries—three times more than usual, to be exact. Recognizing the growing demand for their wares, the couple decided to start selling again. “Opportunities came left and right. Brand collaborations and exhibits happened, and we were selling a lot of in-demand pieces. More and more people started taking interest in mid-century modern furniture, and we were happy to share our passion project with them.”

The Mishukus think that the exponential demand and interest for items like mid-century modern furniture amid the pandemic are driven by this newfound desire to invest in quality, express one’s distinct personality, and add more value to one’s home. “We’re at a time when people have a renewed appreciation for life. We want to make the most out of our time and space. In our homes, for instance, we’re now motivated to create a safe haven that expresses our individuality and answers our needs at the same time. Mid-century modern pieces, with their emphasis on functionality and aesthetics, are able to answer these needs,” they surmise.

As “mid-century modern” encompasses several decades, designers, and schools of artistic thought, Ken and Isa recommend first-time buyers to start small. “There’s so much to take in with mid-century modern design, and even we are constantly relearning and discovering new furniture, designers, and aesthetics beyond the iconic ones,” the couple reassures. “Take your time researching and find the pieces that speak to your soul, address a current need, and work with your current space. Then, begin from there. Explore the different colors, find complementary pieces, or even buy multiples of the same item. Remember that it’s not always about getting the most expensive piece or the most iconic one.”

The vision for mid-century modern

The León Gallery auctions aren’t over yet, but Ken—passionate to share more about mid-century modern in any way he can—is already thinking of the next exhibit. He wishes to collect and exhibit more Paul McCobb pieces. “Paul McCobb, with his streamlined and sleek furniture, deserves as much attention as the more well-known designers such as Florence Knoll and Charles and Ray Eames. In fact, I am thinking of creating more exhibits featuring designs and designers that are lesser-known but just as desirable and laudable. It is a risk, but as a collector, this makes the journey more exciting,” Ken shares with a smile.

Back in Laguna, the Mishukus will continue to maintain their new space called MCM Play. “We were able to acquire a bigger warehouse, and now we have a space where your mind and design sensibilities can play,” Isa says. Manned by a team of six alongside the couple, the space triples as a showroom, workstation, and studio for exhibiting, restoring, and photographing furniture, respectively. Adding a touch of whimsy are murals painted by some of the Mishuku’s street artist friends.

And as for the Wassily chairs, it won’t be long until we find out who will be lucky enough to own these unique and well-loved pieces that come with a meaningful, priceless story.