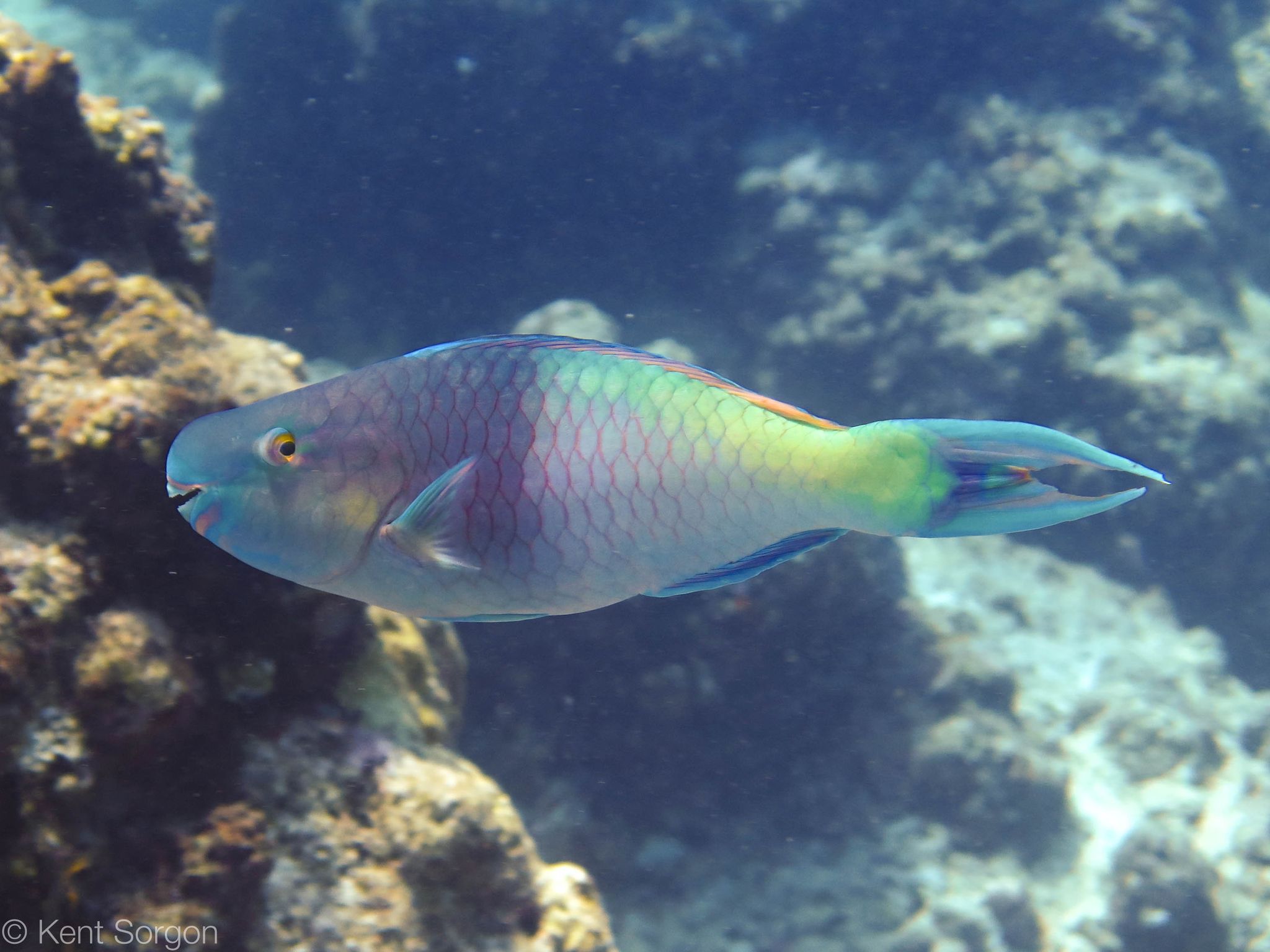 The solution to keeping these colorful sea creatures around isn’t what you think it is, and neither is their importance to the environment.

Over the past years, social media posts have been circulating about the need to avoid parrotfish, popularly called loro or molmol, in public markets across the Philippines.

These posts have been shared thousands of times with the best of intentions, but there’s more to the discussion than simply banning the capture of these colorful reef residents.

Just what are parrotfish?

Parrotfish are any of the 90 or so fish species belonging to the wrasse (pronounced rass) family. They’re common sights in tropical coral reefs because of their relatively large sizes (usually six inches to over three feet and shaped like a football), weird swimming behavior (like most wrasses, they use their pectoral or ‘arm’ fins to glide like mammals), and insanely vibrant coloration (get a psychedelic drug and imagine a green fish. Voila, you get a parrotfish).

With teeth fused into a parrot-like beak that’s harder than gold, silver, or copper, they efficiently scrape the surfaces of coral and rock, crushing whatever they eat into sand, which they later excrete.

“Parrotfish are one of the many agents of bioerosion in coral reefs. Bioerosion combines physical and chemical erosion, plus natural reef growth. This natural process is important in maintaining the health of coral reefs,” explains Dr. Rene Abesamis, a noted marine scientist.

We divers love them because they’re great photo subjects, especially when they graze (they don’t flit around as much as say, damselfish). Their constant crunching can also be heard underwater and is a constant reminder that reefs are very much alive and in flux.

Fisherfolk like them because they have a tendency to sleep at night in predictable locations, usually cocooned in a protective mucous good enough to hide from most predators—but not determined fisherfolk armed with spearguns. Thus are markets from Cebu to Curacao constantly stocked with parrotfish.

As a diver and environmentalist, I’d like nothing more than to see wildlife left alone in their cozy coral reef homes—but we need to stick to science and consider marginalized coastal communities when we dispel some notions about parrotfish.

They do not keep corals healthy.

Practically all social media posts portray parrotfish as ‘shepherds’ which eat hair algae, preventing them from taking over coral reefs.

“Most parrotfish don’t really eat visible algae. They graze on microscopic bacteria which live on reef surfaces, including rocks, corals and even seaweed. Some species also eat live coral, which are converted to sand,” explains Kent Sorgon, an ichthyologist or fish scientist. A large parrotfish like a Bumphead (Bolbometopon muricatum) for example, can transform a ton of live coral into white sand each year.

Coral reefs can thrive without parrotfish.

This might be so if parrotfish dined purely on fast-growing hair algae, but as above, they mostly target cyanobacteria growing on reef surfaces. Many other grazers do a better job at keeping visible algae from choking off coral reefs – like rabbitfish, damselfish, and most especially surgeonfish, something I investigated in the Tubbataha Reefs in 2013.

A 2015 study by Dr. Angel Alcala and other scientists found no significant correlation between the presence of parrotfish, hard coral cover and algae. It was instead found that more parrotfish were recorded in areas with less hard coral cover. I can attest to this, for diving in Laiya in Batangas in the early 2000s, I saw the most parrotfish in rubble areas devastated by storms, not in healthy reef areas.

“A recent review of studies around the globe concluded that there’s almost no empirical support for the idea that protecting parrotfish prevents coral reef decline,” adds Dr. Abesamis. “These notions can distract us from addressing the true drivers of coral reef decline such as siltation, pollution, destructive fishing practices and climate change.”

Banning the capture and sale of parrotfish is simply not an effective conservation tool.

Experience has already shown that total fishing bans for selected groups of fish caught in non-selective gear, like a large net left for a few hours around a patch of reef, simply doesn’t work.

“What a fishing ban on a specific group that’s also economically important might do is to likely shift fishing pressure to other groups, which can adversely affect coral reef systems,” adds Kent.

Many fishers in the Philippines and beyond depend on various types of reef fish for their sustenance and livelihoods. Simply saying “Stop fishing for parrotfish!” won’t work (even if you ask nicely and say please) and will most likely be resented by subsistence fishers living well below the daily poverty threshold of 2USD daily.

“A ban isn’t inclusive for fisherfolk because it’s a solution which caters to either the environment or people, not both. Sustainable solutions should be created in partnership with those who directly rely on marine resources. Fishers should always be considered collaborators for conservation, never enemies,” notes Gela Petines, founder of Batang VIP.

Except for Bumphead Parrotfish, which are classified as Vulnerable by the International Union for the Conservation of Nature (IUCN), a total ban on catching parrotfish shouldn’t be a priority management action. “If the objective is to sustain fisheries, then parrotfish must be managed just like how most other reef fish targeted for food are managed,” adds Dr. Abesamis.

Parrotfish are no more important than other reef denizens.

Let’s be clear: all sea creatures are equally important, being connected in ways that we’re only beginning to understand. Though cute and charismatic creatures like whales, dolphins, sea turtles and large fish are far easier for people to relate to, even the smallest plants and animals serve a greater purpose.

Corals, sponges, clams and barnacles for instance act as living filters, forever straining water of particulate matter. Sea urchins and cucumbers are effective grazers and scavengers. Even what we can’t see, microscopic free-floating algae, provide food for trillions of fish while generating much of the oxygen you and I are breathing now. Eliminate one group and the system can change dramatically.

And because all sea creatures are equally important, the solution to save the world’s coral reefs isn’t to ban the capture and sale of a single fish group. It’s to ramp up efforts to conserve the planet’s remaining coral reefs by veering away from expensive and dirty fossil fuels which accelerate human-induced global warming, minimizing coastal development (particularly reclamation), avoiding single use plastics (just imagine how much extra plastic we’re using now for facemasks, faceshields, takeout food, and all the packaging from online shopping), minimizing coastal pollution and run-off from rivers, better-managing fisheries, shifting to more sustainable alternatives and empowering instead of castigating coastal communities whose lives and livelihoods depend so much on the sea.

When we apply these solutions cohesively, we protect not just the lovable, colorful parrotfish, but the natural systems that can keep tomorrow’s oceans as vibrant and productive as they are now—and that’s the secret to saving Loro.