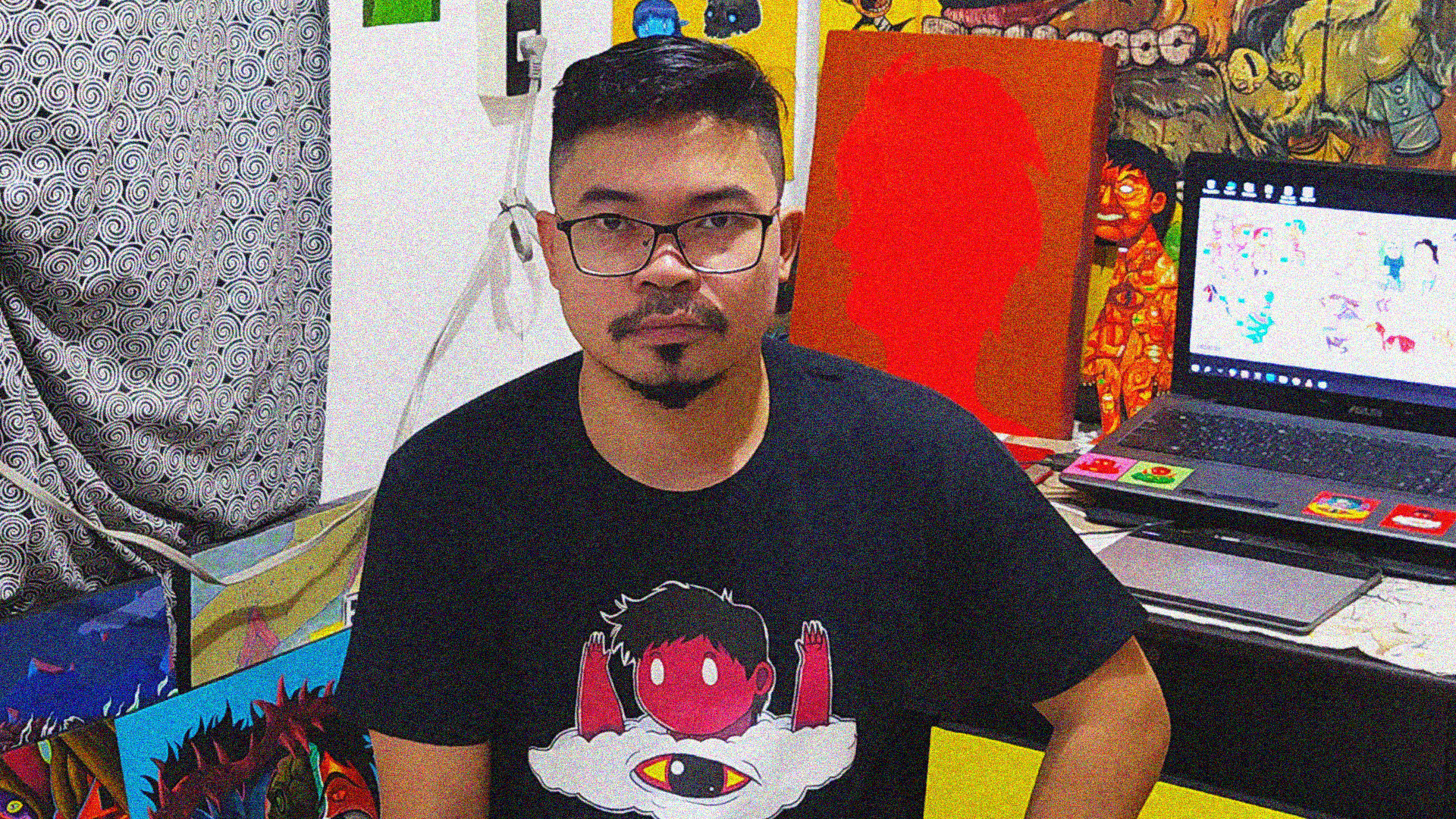 Wild Child: Going Lite: (Episode 1 Yati) is full of surprises. Even its own creator didn’t expect the “adorable monster” that inspired the whole exhibit.

Self-effacing visual artist Lean Luis Reboja is the last person you would think capable of violence. The cadence of his speech is surprisingly mellow, his mannerisms—coupled with his huge owl-like glasses—will remind you of Harry Potter.  Yet on the canvas, Lean becomes capable of many gruesome acts.

Lean—who prefers to go by “Leanderthal”—spawns creatures from the brushes he wields. Fangs, tentacles, multiple eyes, skulls, scales, horns: they’re all there, gleefully and liberally translated onto Lean’s canvases in gory, garish glory.

The visual artist’s previous exhibits in Cebu and occasional appearances in Manila galleries have often featured an accumulation of grotesque faces, misshapen forms, and distorted limbs. He pays no heed to the concept of negative space. As if empty corners are his enemies, he attacks each one with fury, ensuring that all monsters that lurk there are revealed.

But when he was asked to stage a solo show at boutique cinema Sine Pop! in Manila,  he was asked to lighten up on the gore and go for dreams instead of nightmares. And while he was enthusiastic about the concept, Lean seemed reluctant to translate cheer onto a canvas.

It took one of his resin sculptures—called Yati!—to give him the impetus to do so. “Yati!” is a knee-jerk cuss word uttered by Visayans when confronted with surprising or disgusting events (for the purposes of this story, it’s safer to bet on the former). It’s a fitting name for a sculpture that was, itself, a surprise: one that Lean happened upon in the middle of the show’s preparations. And here’s where the story of Yati! gets more interesting.

Four years ago, Lean had proposed a sketch of a bug-eyed, twin-horned, yeti-like critter to serve as the model for a sculpture. This draft was handed over to a Taiwanese toy maker for 3D modeling and casting. However, after many sculpting attempts, revisions, and conversations lost in translation, the toy makers simply gave up. And that was the end of it—or so Lean thought.

The sketch lay in limbo until, midway through Lean’s current preparations, a working model of it appeared, thrown onto his figurative lap. Apparently, the show curator went behind Lean’s back and asked a 3D modeler to give the monster sketch another go. The modeler managed to whip out a cast for Yati! a few weeks later.

It was still a gruesome thing, more or less. But for someone called “Leanderthal,” this was probably as light as it gets. And so, the star of the show was born, and the show itself finally had a name. It was called Wild Child: Going Lite: (Episode 1 Yati).

By May 2021, Lean had given life to multiple Yati! sculptures, ready to invade Manila and demonstrate the visual artist’s ability to tap into his lighter side. The final canvases made their way from Lapu-Lapu City to the Sine Pop! grounds at Cubao, Quezon City. Set off against brutalist architecture, Lean’s critters are a humorous combination of the monstrous and the adorable. The artist decked Yati! in polka dots, spray-painted gold and silver, and in delicious ice cream colors.

The fifteen hyper-colorful paintings included in the exhibit serve as a counterpoint to Lean’s sculptures. Depicting less frenetic versions of his creatures, the paintings pay homage to Maurice Sendak in their childish simplicity.

Perhaps this is an easy way of introducing Lean to a wider audience: blend his old style with his current works. Perhaps, this combination will do the magic trick. Will Wild Child: Going Lite: (Episode 1 Yati) lead to more episodes in his budding multiverse?  Lean’s creatures hunker down by a campfire and wait for the call.

Wild Child: Going Lite: (Episode 1 Yati) is a pop-up show that will invade Sine Pop! from June 23-26, 2021 before it blinks out to other universes. The exhibit is curated by JT Gonzales.