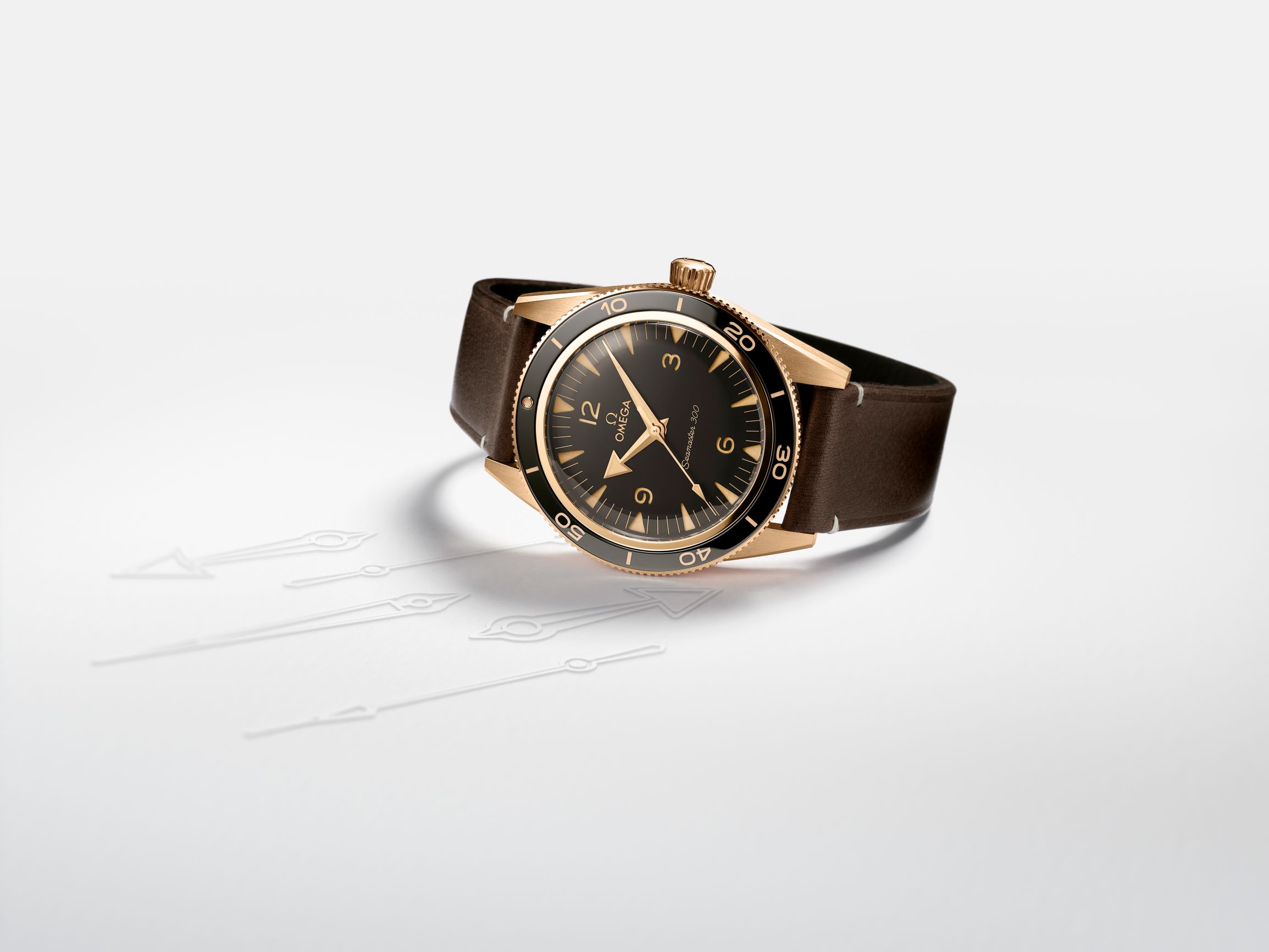 The star of the show is the Seamaster 300, and there’s a cool surprise for Speedmaster fans as well.

It’s past 11 AM in Switzerland, and right now, we’re all waiting for the digital show to begin. On my screen, everyone’s cameras are off, but any moment now, they’re all about to go live.

I strap my Omega to my wrist (an old, faithful Seamaster that’s seen better days) and fix up the small, golden astronaut statue sitting on my desk (a memento from the 50th anniversary of the Speedmaster’s journey to the moon). This, I think, will help me get into the mood. But honestly, it won’t take much to get there.

Omega’s presentation marks the beginning of the watch season. And where once people might have flown out to Baselworld, Watches & Wonders, and SIHH, everyone is staying at home instead.

This is what the watch expos have become. If anything, they’ve gotten more convenient, though you do miss the larger conventions. Still, it’s no less exciting for all that. Because these days, they’ve come to mean something else. Because these aren’t just shows anymore.

In the wake of the pandemic, these things have since become a statement: that watchmaking is alive and well. That in Biel, where the capital of watchmaking in Switzerland stands, the watchmakers aren’t giving in to what’s happening around the world.

Just before this meeting, OMEGA sent a video with a very distinct, though not completely surprising, announcement. The video says that every watch they produce will be a master chronometer. And this is big news.

Chronometers set the bar for reliability. Before a watch earns the designation, each one is subject to a battery of tests until it passes a rigid standard. (You can read this story to understand how big a deal this is.)

On the screen, Jean-Claude Monachon and Gregory Kissling greet everyone in the virtual room. Monachon is the VP for Product & Customer Service, while Kissling is the Head of Product Management. The short of it is, they’re the ones who know the new releases best. And together, they go through them with us.

They tell us that five new models are OMEGA’s novelties for this release. There’s a De Ville with a power reserve, a Constellation with a small seconds sub-dial, a Seamaster Aqua Terra, and a Seamaster Diver in deep black (called Black Black).But the star of the show, at least for us, is definitely the new Seamaster 300.

With this piece, OMEGA turned back the dial by more than a few years. The new Seamaster 300 looks decidedly vintage, drawing its aesthetics from the first Seamaster released in 1957.

It looks particularly sharp, especially in the new bronze gold case. And it should. Because along with the Speedmaster, it’s one of OMEGA’s most iconic and familiar lines.

The bronze gold case is new territory for OMEGA, and both Monachon and Kissling mention that they developed a proprietary alloy to get it right. Using bronze in a watch case means that it slowly develops a patina over time.

Each patina is also unique to the wearer, influenced by the way they live: riding a motorcycle, sailing across the ocean, roughing it through the mountains-that sort of thing. You can see why this has become popular.

OMEGA’s new bronze gold material isn’t exactly bronze. At least not the usual kind made of tin and copper. Kissling says the normal kind can suffer from “verdigris oxidation that can be toxic to the skin.”

OMEGA’s particular alloy is made of copper, silver, gold, and palladium. It was developed so it doesn’t need protection, but will still get the coveted patina that’s associated with bronze. This alloy, when aged, develops a patina that leans on the pinkish direction. A lot of thought went into making it, and if the watch they’re showing right now is any indication, it’s going to be very well received.

Now on to the dial. The Seamaster 300 is relatively minimalistic, with only the OMEGA logo and symbol adorning the top half and the “Seamaster 300” marking at the bottom. The rest of the text is on the caseback, which is done in sapphire crystal to display the master chronometer movement.

The broad arrow hour hand and the slimmer minutes hand make it extremely legible, especially with the lume applied to the end of the arrow and the bulk of the minutes hand. The seconds hand, meanwhile, comes  in a distinctive lollipop style. The hour indices are done in the shape of arrows as well, giving it a balanced and cohesive look.

Overall, this is a striking watch that will fit most situations, carrying the Seamaster design cues through and through. Personally, it’s one of the best interpretations of the icon that I’ve seen.

Back on screen, as the presentation is about to end, I have to wonder where the Speedmaster is throughout all of this. It already received one of the most important updates with a landmark release earlier in the year, but being OMEGA’s most popular icon and the watch that went to the moon, I still had some hopes that it would pop up somewhere.

And then Monachon comes on the screen, saying that there’s one other thing they wanted to show us. In his hands is a collection of watch straps, all made for the Speedmaster. Each one is inspired by NASA, with colors that reflect the space program and its missions. They’re also badged with the NASA icon, right across the length of the strap.

And here’s the thing: Monachon says that it didn’t take NASA any time at all  to agree to it. That the space agency had simply agreed that they could do it. They probably thought it was a good idea. And it is. For people who saw the Speedmaster go to the moon in 1969, or for the rest of us who watched the livestream of the archival broadcast on its 50th anniversary, this is something special.

As the presentation comes to a close, we’re left with five new watches to look at. Five new master chronometers to think about, and even more to look forward to in the future. And that’s the great thing about today. .Because now, more than ever, is a time to look forward.