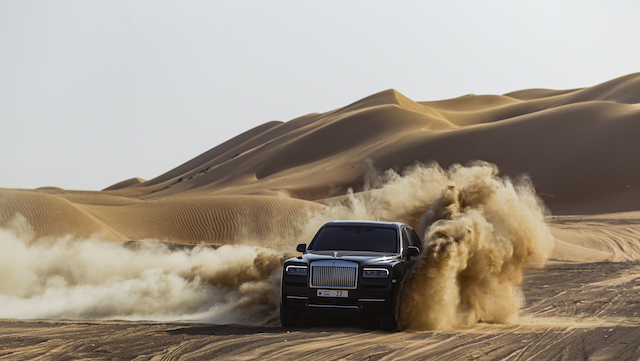 One brave owner shreds across the desert with the Cullinan.

When you think of Rolls-Royce, you think of sleek black tourers in the open road, silver convertibles driving across exotic beaches, and full-sized saloons that feel more like hotel rooms: each of which can be tailored right down to the ashtray. The Goodwood-based motoring house has been sitting at the pinnacle of the automotive food chain for so long that it’s become a byword for anything that’s at the top of its class.

The motorcar house is equated with bespoke, ultra-high luxury, and it’s difficult to imagine one of their vehicles even daring to go off-road. But since it came out with the Cullinan—it’s first SUV—in 2018, Rolls-Royce has shown a side of its world that we don’t often get to see: the rugged, dirt-road-plowing, mud-traversing side. Granted, this side didn’t exactly exist before the Cullinan, but now that it does, it’s about as luxurious as you can get. (Check out our story about the time we went to the Cullinan’s launch.)

And here we actually get to see the SUV in action.

One particular owner decided to throw caution to the sands and took the Cullinan on a roadless trip across the Arabian desert. It’s a harsh place—all 2.33 million square kilometers of it—where temperatures can reach up to 50 °C. But, more than likely, there are few other vehicles you’d rather be doing this in.

Even with all the sand and dirt in the air, the Cullinan is all class as it tears across the dunes. Still, this shouldn’t come as much of a surprise. The SUV was extensively tested before its launch in a series of punishing road trips called The Final Challenge. It was taken on a tour across all sorts of terrain—including a desert—where the team tried to break it (read about one particularly adventurous team member here). In any case, the Cullinan kept its composure, exactly the way it did in this video.