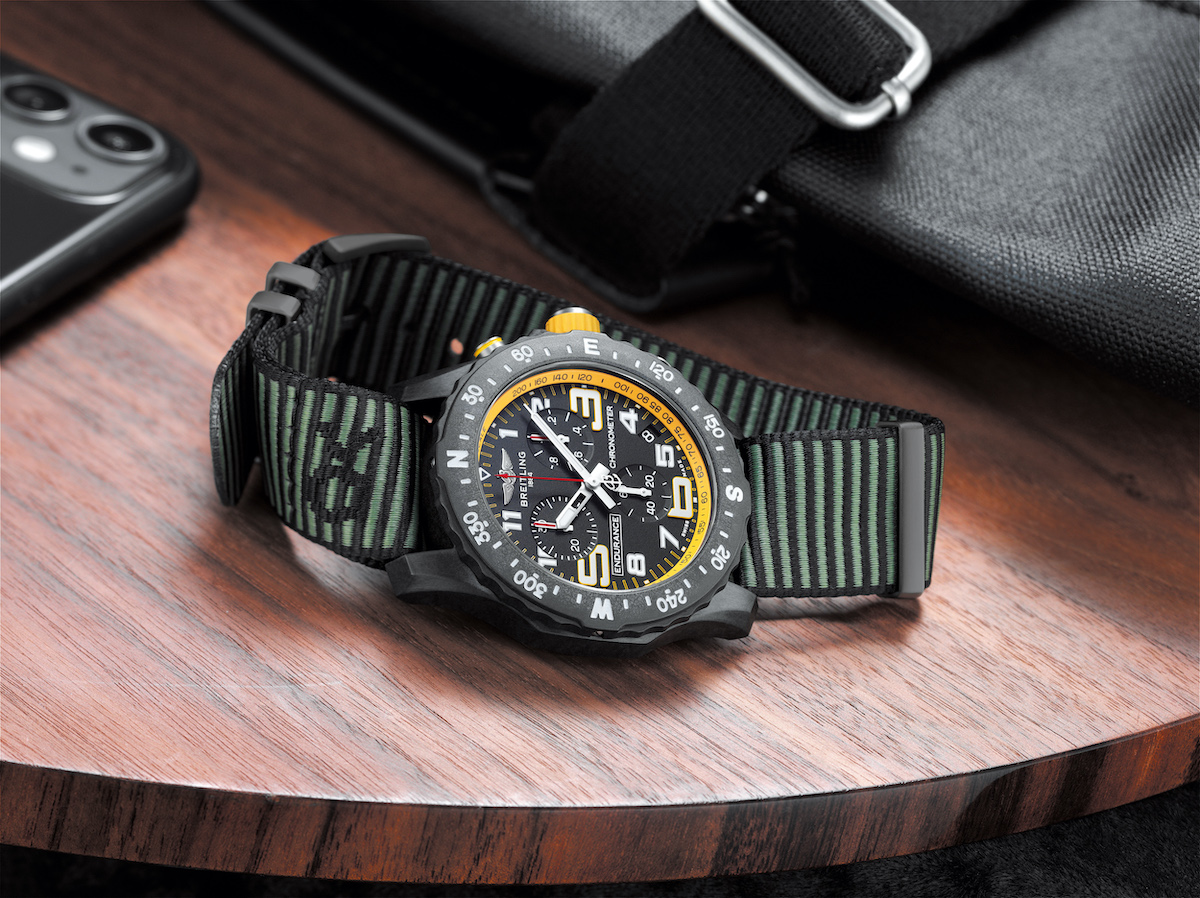 Breitling’s new watch isn’t luxury as we know it, but it might be the luxury of now.

Since Georges Kern took the reins in 2017, Breitling has flown in a different direction: it’s reimagined its flagship models, dived deep into the lifestyle each of their watches represents, and even enlisted celebrity “squads” to better connect to the growing millennial market.

But what about now, when the pandemic has us all worried? With the release of the Endurance Pro, Breitling may have just come up with a watch for our times. At least, it ticks off all the right boxes.

The Endurance Pro is a sport watch through and through: large at 44mm, water resistant for up to 100m, and fitted with a rubber or NATO strap that comes in different colors. It also has a chronograph that’s easy to read while on the go, which is something athletes could use. The case is built out of the house’s proprietary Breitlight—a polymer-based material that’s scratch-resistant, anti-magnetic, anti-allergenic, and is also several times lighter than steel or titanium. (Having tried on the massive, 50mm Breitling Avenger in Breitlight during its launch, I can definitely attest to this.) Under the case, everything runs on the Calbre 82, a SuperQuartz movement that’s a certified chronometer.

Given the popularity of stainless steel, mechanical sport watches, this certainly goes against the grain. But that’s what makes it a watch for these times. In the current crisis, things are a little more physically demanding, so you’ll want a watch that will stand up to anything you can throw at it—whether it’s biking through the city or taking delivery boxes through the front door.

You’ll also want one that isn’t too fussy about getting washed and disinfected, and lightweight watches are a lot more convenient when moving around. And as for the quartz movement: well, why not? It’s as precise as they come, and the battery only needs to be changed in roughly three or four years. Not having to wind it up (or strap in into a winder) adds to the Endurance Pro’s easy wearability.

It’s fuss-free, highly functional, and perhaps just as importantly, handsome-looking. It wouldn’t look out of place even if you don’t do any sports at all. With today’s dressed-down, utilitarian wardrobes, the Endurance Pro fits right in with its vintage charm and the pop of color on its straps. And sure, you can always wear a less expensive beater or a smart watch, but a watch with Breitling’s historical pedigree (and high survivability) is going to look and feel just that much nicer.

As we learned from Alvin Soon (Breitling’s President for Asia) in our video interview last year, the luxury watch industry has maintained a steady presence despite the advent of smart watches. We also learned that millennials are increasingly being attracted to the luxury watch market as well, though not in the same was as the generations before it were. They’re looking for a watch that represents who they are and what they do, and the Endurance Pro is one of the responses to that interest. It may not be luxury as we know it, but it might just be the luxury of our times.

During the online launch of the Endurance Pro, Georges Kern himself went on cam to do the unveiling. And during the launch, the house also announced something to go along with it: the Breitling Endurance Pro Strava Challenge.

Strava is an app that uses gps data to track sports activities, and Breitling is challenging people to record 500 minutes of sport activity on it (jogging, hiking, cycling, swimming, and so on). That’s roughly the time it takes to run through a full IRON MAN competition, though participants have a two-week period to complete it. At the end of two weeks, the people who’ve qualified stand to win Breitling gear, including the Endurance Pro, a Breitling/Colnago bike, and Breitling Jerseys. (The prize draw is only available in certain countries, though, and you can find the details here to check if you qualify.)

In any case, the Endurance Pro is a step in a different direction, and it’s a direction that seems right, especially for these times. Because it’s one that faces forward.

Check out the full Breitling webcast below: