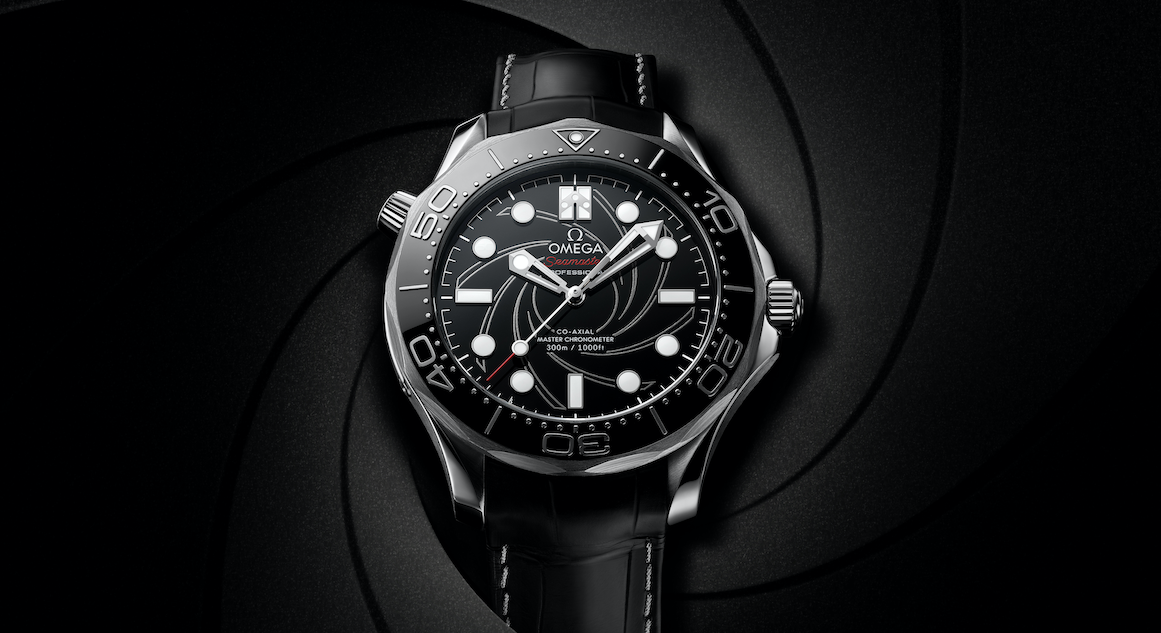 Aside from the clothes, the cars, and the gadgets, James Bond is just as well-known for his watches. Fully kitted out by the Q-division (the fictional research and tech branch of MI6), they came with all sorts of devices built into the case. Think circular saws, magnets, explosive charges, and you’ve got idea.

Bond has gone through quite a few watch houses in his arsenal of timepieces across the decades. But since Pierce Brosnan’s turn as the super spy in GoldenEye back in 1995, it’s the Omega Seamaster that has become his signature watch.

And now, for Daniel Craig’s final appearance as Bond in No Time to Die, Omega is commemorating the occasion with a special, platinum-gold, Numbered Edition of the Seamaster. And while the watch doesn’t have any gadgets to go with it, it does have a few secrets of its own.

But first, let’s look at the most obvious details. The dial is executed in a spiraling, gun barrel design in black enamel and white gold: reminiscent of the gun barrel sequences you see in the James Bond movies. There’s also the Bond family coat-of-arms at 12-o’clock, which is a nice touch, and clearly marks it out as a 007 timepiece. Flipping to the case back, a more detailed coat-of-arms is engraved into the sapphire crystal, which is filled with platinum.

Still, just like the man himself, the watch hides a few cool details that you only see when you look closer. Just below the 7 o’clock hour marker is a small 007 logo, which is very subtly done. Hidden in the 10 o’clock hour marker is another Bond detail: the number 50. This references the 50th anniversary of On Her Majesty’s Secret Service: the first and last time that George Lazenby took on the role. Lazenby made his mark on the franchise despite starring in only one Bond film, and to date, it remains one of the most celebrated installments. (Aston Martin even came up with a limited edition DBS Superleggera to mark the occasion.)

In any case, the Seamaster Numbered edition is a great sendoff to Daniel Craig’s run as James Bond. And this being a Seamaster, it’s made to go underwater, with 300 meters of water resistance to its name. The watch runs on the in-house co-axial master chronometer calibre 8807, guaranteeing precision, anti-magnetism, and performance. (You can read more about chronometers here.) And in another cool touch, the watch comes in its own Globe-Trotter suitcase, bound by NATO-like straps.

With No Time to Die coming up soon, it looks like going to be an exciting time ahead for James Bond fans. And we can all look forward to checking out his watch (and the cars and gadgest and clothes) when it finally hits the screens.