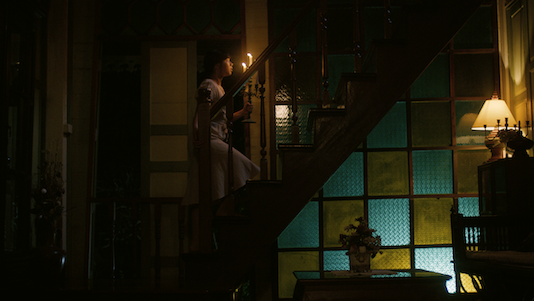 Netflix’s new horror film is as much about sound as it is about visuals.

Five minutes into Netflix’s The Maid, and you know this is the kind of movie you watch with the speakers turned way up. And it’s not just because it’s horror as advertised—it’s because the sound is genuinely something you’d appreciate.

The Maid is a Thai film about a housemaid—Joy—who enters service in an eerie mansion owned by a high-profile couple. They have their secrets but so does she. The plot is part supernatural, part drama, and part revenge flick.

It has some beautiful shots, brilliant acting (especially Ploy Sornarin, who plays Joy), and has an unusual structure for a horror film (it’s told in three chapters). But it’s the sound that ties everything together. From the chittering of the monkey in the opening scene, to the ominous background music of the house, to the gentler notes of the exposition in the middle: this is a movie that makes full use of sound to draw the audience into the story. And in the horror genre, that counts for a lot.

Think about that for a minute. The Jaws score, the scrape of Freddy Kreuger’s claws, the grating sound in the shower scene of psycho: horror is as much about sound as it is about the visuals. Sound plays such an important role in creating the atmosphere of a film that it’s likely you’ll remember the audio along with the image when you think about a particularly terrifying scene.

And in The Maid, the sonic atmosphere is just as complex as the story.

In a recent round table talk over Zoom, director Lee Thongkham and sound post-production supervisor Traithep Wongpaiboon told us about their new film. So we asked them how they went about it, how they mapped out the sound for The Maid. And they tell us that the sound for each chapter was created in the same way as the story. It starts off slow with some some spikes in emotion, then quiets down a bit in the second chapter, and finally goes all out in the last one.

It’s difficult to get into it on detail without going into spoiler territory, but once you watch it, it makes more sense. But we’ll leave you this. The maid isn’t what you expect. Well, it is, but only at first. The jump scares, the ominous house, the mystery: all the elements are there and you think you have it figured out. But the twists that the film takes will make you think again, and the ending is nowhere near what you thought.

The short of it is, The Maid will make you want to listen, not just watch. But how does this work in the age of streaming, when you’re watching in your living room instead of the Dolby Atmos theaters?

Netflix has made an effort to improve how it delivers sound, and it all started with something from a very popular series in the horror genre: Stranger Things. As Netflix tells it, the Duffer brothers (the creators of the series) were previewing the car chase scene from season two. They were doing it it in a living room environment and realized that it didn’t quite deliver the same crisp effect that they were getting in the studio, because the sound had been compressed. So Netflix made it a point to address the problem and bring studio-quality sound to the streaming service.

The problem with studio-quality sound is that the files are so large, that it would be difficult to deliver in a streaming service. bBut when you compress them, they lose quality in the process. The solution that Netflix came up with was HQ audio: a compressed file that’s perceptually transparent, and they say it’s indistinguishable from studio-quality.

So that’s how horror helped paved the way for better quality audio in streaming. With The Maid having premiered in Netflix last July (along with Ju-On Origins and The Grudge) horror seems to be returning in full force. And that means we’ve all got a lot of mystery to go through (and listen to), while we’re all staying at home.

Plus, in The Maid, there’s the mystery of the monkey. Which, honestly, we’re not sure we’ll ever figure out. Over the conversation, Thongkham alludes to it, says that the theories he’s been hearing about it have all been wrong. But, right now, he’s not telling. And maybe that’s for the best. Because just as sound and visuals make a good horror film, an unanswered question is what keeps it in your head when you’re up at night.