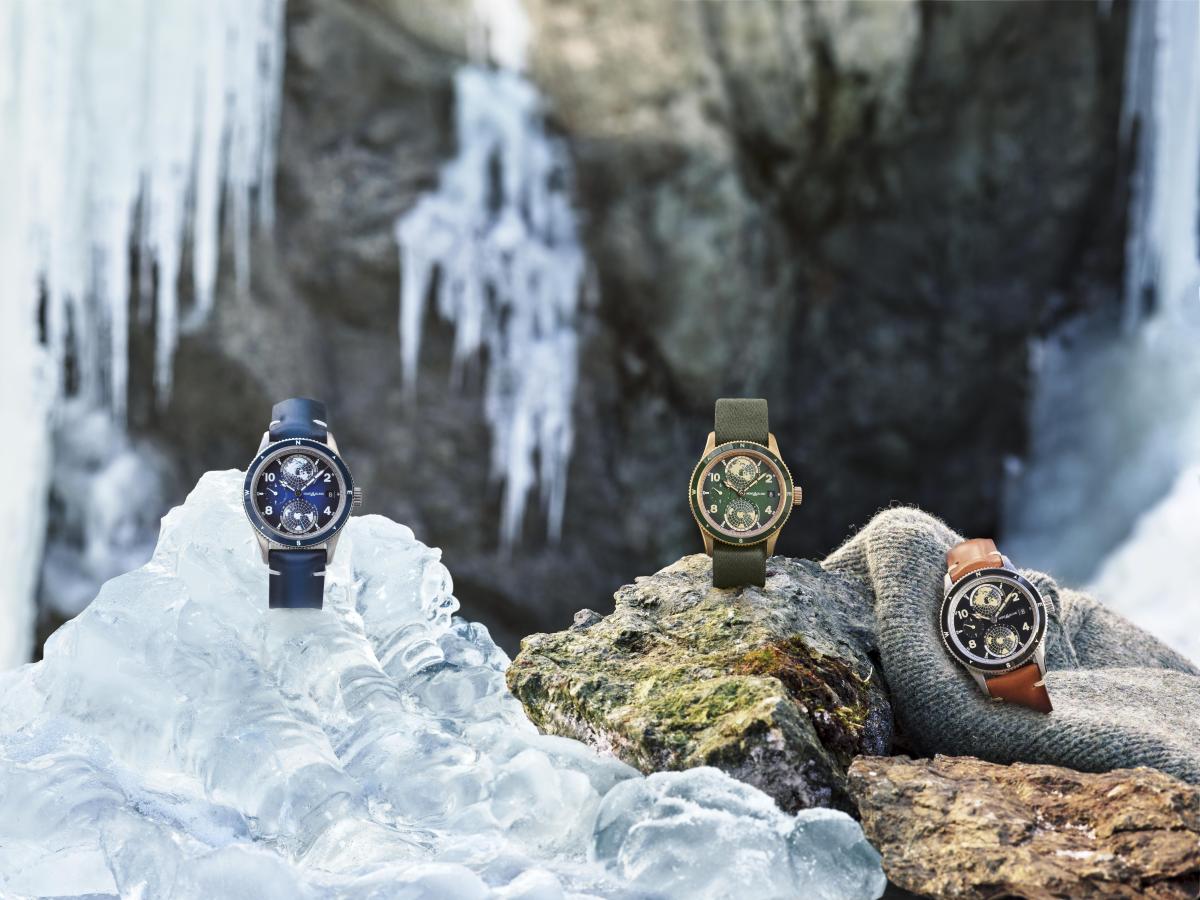 Mantle sits down (from afar, by camera) with Davide Cerrato to talk about the new collection.

From somewhere in Switzerland, Davide Cerrato—Managing Director of Montblanc—is introducing us to their new collection. In his quaint, well-lit room, you can see just a hint of what’s outside. A reminder that even the watchmaking world is staying indoors.

But while the major shows have been canceled this year, that hasn’t stopped the gears from turning. At least not completely. Some, like Watches & Wonders (which Montblanc is participating in), have chosen to stage their shows online. It’s the largest digital watch trade exhibit so far, and it’s in the middle of that where we catch Davide.

Davide welcomes us and begins to talk watches. The house, he says, has been constantly working on new designs, and it’s difficult not to get excited about that. The past years have seen Montblanc display its watchmaking capabilities, coming up with incredible pieces like the Metamorphosis watches (which transform mechanically) and the Villeret Tourbillon Cylindrique Geosphères Vasco da Gama (which has two highly finished globes that indicate the timezones).

And while these limited-edition watches are exceptional—especially when you see them live—it’s the 1858 collection that’s drawing a lot of attention these days. On the table, in front of Davide, are some of Montblanc’s latest pieces from that line.

This isn’t quite like being at the booths in one of their shows. Still, it’s as close as we’re going to get these days, and that counts for a lot.

Having just come out of Watches and Wonders 2020, Montblanc’s new 1858 collection includes a mix of pieces that range from casually elegant to full-on gentleman explorer.

In his room, Davide picks up each of the watches in turn, and he goes: “We continue to nurture also the more vintage side of the 1858 with some very nice interesting unique additions.”

And he’s not wrong there.

A lot of them draw heavily on the history of Minerva—the watchmaking house that Richemonte (Montblanc’s parent company) acquired back in 2006. Minerva’s roots date back to 1858, when its founders started a company for pocket watches in Switzerland’s Jura region. Montblanc continues the Minerva legacy while infusing its own design principles into the timepieces.

The 1858 watches take their looks (and some of their functionality) from the Minerva military chronographs of the ‘20s and ‘30s. This gives them a rugged appeal, though still balanced by Montblanc’s use of their own design codes, which are a little more restrained. So even with all the complications, they don’t end up looking cluttered.

Clean lines, a well-rounded design, a penchant for adventure: the 1858 collection exhibits a vintage charm. And with the enduring obsession for vintage style these days (from clothes to furniture to shaving razors), Montblanc’s designs appeal to a subset of collectors who enjoy the nostalgia.

One of the two things that immediately jump out at you is the sense of movement that these watches have. The 1858 collection has a dynamic design that encourages you to explore and look for things that are out there (or fantasize about them over the Internet).

The other thing that you notice is there’s a whole lot of blue: from dials to straps to details. It’s the color of the year, and you can expect to see more of it as the months pass by. In any case, the 1858 collection is a good place to start, so we’re taking a look at some of the line’s pieces.

This collection is all about exploration, drawing its inspiration from snow-capped mountain regions with its blues and whites. And while travel may be at a standstill, there’s no reason we can’t enjoy the spirit of it at home.

This is undoubtedly the star of the collection. The Geosphere takes its spirit from the Seven Summits Challenge—a global challenge that  encourages mountaineers to try and climb the highest peak of each continent. Where last year’s model came with green details and a bronze case (2019’s muse material), the new Geosphere comes in blue and titanium. This makes the watch a good deal more versatile for daily wear, because it can go with anything from chinos and a polo, to an s-collar shirt and a laid-back suit.

The watch is a world timer, using depictions of the northern and southern hemispheres to show the time in different parts of the world. These hemispheres also display day or night, and the sub-dial at 9 o’clock can also be set to show a second time zone. There’s also a date display window at 3 o’clock, which adds to the functionality.

You’re getting a lot of watch for the money with the Geosphere, considering all these complications, and it won’t be a stretch to say that this much value is uncommon for the price point.

Chronographs are one the first things people think of when they want a watch with a complication (you can read more about chronographs here). And as a result, this is one of the most crowded segments in the market. Still, there’s a case to be made for Montblanc’s version.

Many of the chronographs out there are inspired by historical watches that have been used for aviation, racing, and even space exploration. Montblanc’s version is inspired by a historical Minerva timepiece and is more geared toward exploration. The bezel, for example, can be used as a compass and you can determine your approximate direction with it.

Here’s how it works in the Northern Hemisphere. First, align the current position of the hour hand with the direction of the sun. Then, mark the midpoint between the hour hand and the 12 o’clock marking on the dial. This approximately indicates south. And from there, you can determine all the other cardinal directions by rotating the bezel to the correct position.

It’s a cool thing to have when your phone can’t find a service connection (or runs out of juice), and the chronograph will let you time things as well.

Based on an old Minerva military Monopusher chronograph, the Split-Second Chronograph is a high complication watch with a specialized function. Where a regular chronograph acts as a timer for a single event, a split-second chronograph allows you to time two things that start at the same moment, but end at different times.

So how does it work?

The Split Second Chrongraph has two seconds hands, one red and one beige, and both are used to keep track of the two events. Say, for example, you’re in a racetrack. When the race starts, you can engage the chronograph by pushing the button set on the crown. The two seconds hands then start moving to track the elapsed time. When one car crosses the finish line, you can press the split button at 2 o’clock. The first hand then stops while the other hand goes on, allowing you to time both cars.

The Split Second Chronograph also has a telemetre scale on the outer rim of the dial, which lets you measure approximate distance from an object through the sound the object makes. It works by measuring the time it takes for the sound to reach the wearer. This complication is useful in certain situations, such as when there’s an incoming storm.

When you see a flash of lightning, you start the chronograph to get the seconds hand running. By the time you hear the sound of thunder you stop the chronograph and check the telemeter scale. The amount of distance indicated in the scale is an approximation of how far the lightning strike was. The telemeter has historically seen use during wartime, when the military used it to check the distance between artillery and torpedoes from their targets. Given the military influence of this watch, this is a nice touch.

Finally, the dial also has a tachymeter (that’s the spiral one in the center), which measures speed over a fixed distance. It’s one of the more common scales used in modern watches. By using the chronograph to track how long it takes to run a kilometer, for example, you can check your average speed on the scale while running. And sure, a smartwatch can do this much more easily, but it’s also much less fun.

The Split Second Chronograph doesn’t disappoint in the looks department either. It comes in a titanium case, giving it some added durability and a distinct look. And the dial meanwhile, is made from a sheet of solid gold, covered in a special blue grand feu enamel.

There’s a lot of thought that went into this collection, and the current deep-blue-and-glacier-white colorways give the vintage exploration theme a bit of modernity. And while it may take a while before we get to head out for the wilds again, these pieces might just help keep the spirit of exploration alive on the wrist.