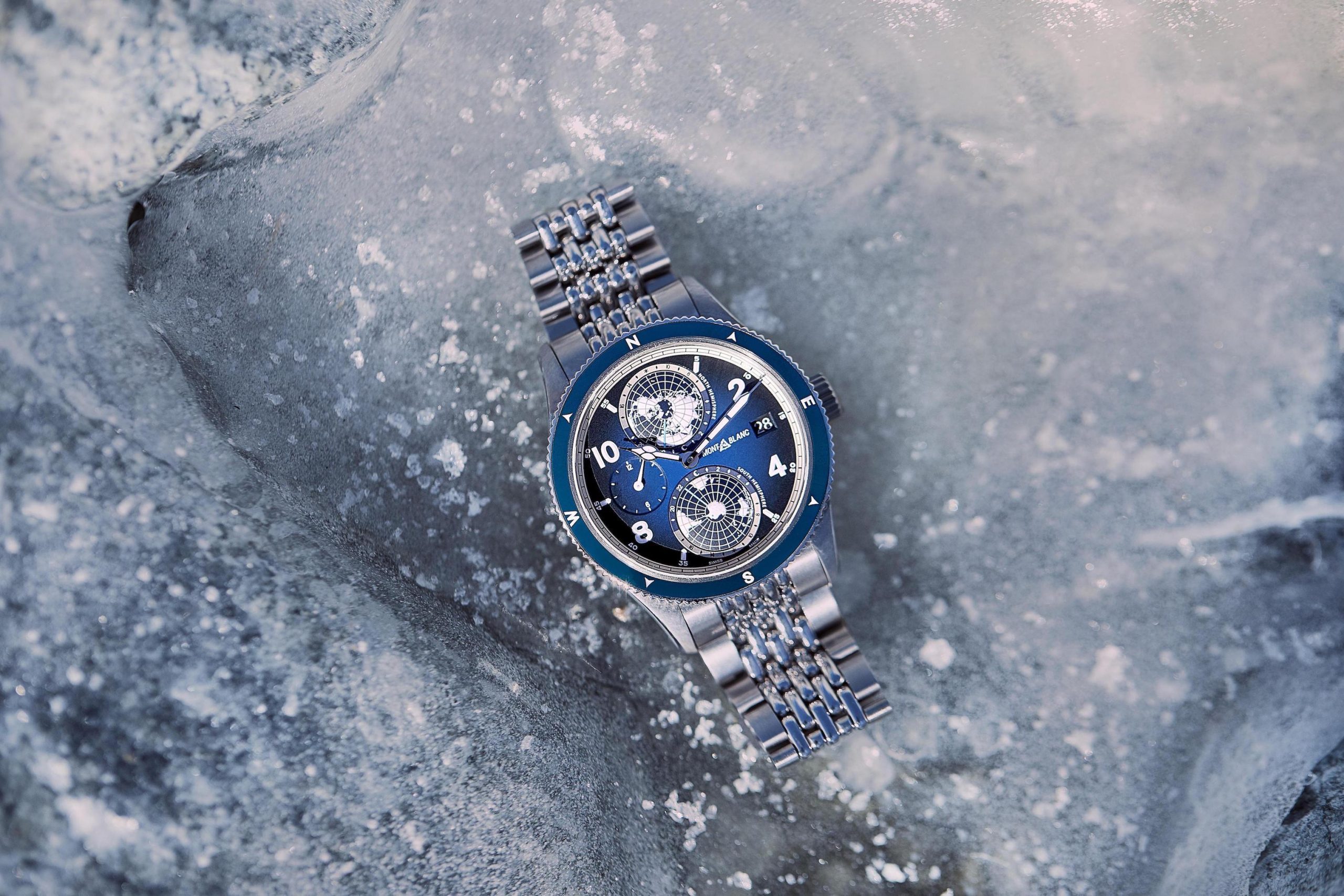 The show isn’t done wowing us just yet.

It’s been a great week for watchmaking, with Watches & Wonders 2020 opening its digital show to the public over the weekend. And while much of the world remains under lockdown, the show has provided a welcome distraction to people stuck at home.

Last time, we ran through eight of the best pieces from the show, and there are quite a few more to come out still, so check back here over the next few days. Meanwhile, have a look at eight more watches that have stood out among the collections.

We’re big fans of the Geosphere back here. And while last year’s bronze-and-green piece was more heavily themed for the outdoors, Montblanc has just released a blue Geosphere that’s decidedly more versatile. The watch is inspired by the Seven Summits Challenge, in which mountaineers try to reach the highest peak of each of the seven continents. The Geosphere is a world timer, and uses depictions of the northern and southern hemispheres to display the time in different parts of the world. The hemispheres also indicate day or night, while the sub-dial at 9 o’clock can also be set with a second time zone. With a blue dial and a titanium case, this is a watch that won’t look out of place in most casual situations and will hold up well in a sport coat or blazer.

Having been named the official watch supplier of the Regia Marina (Royal Italian Navy) in the ‘30s, Panerai and its military heritage have drawn quite a few fans to the house’s collections. Most Panerai watches still draw their design cues from the originals, though the house has since included chronographs, tourbillons, and GMT complications into their models. Panerai’s Laboratorio di Idee has also experimented with quite a few unusual materials for the cases, such as last year’s Luminor Submersible Bronzo. This year, they’ve gone with Fibretech, a composite material that’s 60% lighter than steel. It’s made with mineral fibers that are produced through the fusion of basalt rock, which are then combined with polymers. Fibretech has been used in the aerospace industry for its non-corrosive properties, and it certainly fits the Panerai military ethos. Aside from looking very cool in a graded deep blue, the watch displays the date at 3 o’clock, with the seconds hand at 9 o’ clock.

This is the thinnest watch in world, and that distinction didn’t come easily. Coming in at just 2mm thick (like a stack of two credit cards) the Altiplano Ultimate Concept was revealed in 2018 as a prototype. It took four years to even reach that stage, but the question was: could something this thin really be worn daily, and could it be produced on a commercial scale? This year, Piaget has revealed the answer by making the watch available for purchase. The Altiplano has a specially engineered case, which is also part of the movement (the watch’s “engine”). The crown uses a flat telescopic system, which keeps it from sticking out and ruining the slimness of the entire watch. Overall, it took five new patents to build, and made a new world record that is unlikely to be matched anytime soon.

Purnell is known for its single, exclusive goal: to make watches with tourbillons in them. Built to defy gravity (you can read more about tourbillons in our story here), the tourbillon is a complication that’s considered one of the hallmarks of haute horlogerie.

The house can trace its roots back to Cecil Purnell, who decided to learn watchmaking while recovering from an injury taken in the battlefields of World War I. Fascinated by tourbillons, Cecil would later instill this wonder into his grandson, Jonathan. Today, Purnell has created the Escape II with the Double Spherion: the world’s fastest triple axis tourbillon. The black-and-pink scheme in carbon is a particularly attractive, if unusual, combination.

Roger Dubuis has created something, well, diabolical. The piece is based on a three-tone musical interval that the medieval world called “Diabolus in Musica” (the devil in music.) These three tones (known as a tritone) create a dissonant, and some would say unpleasant, sound. It was then banned by the clergy, believing that such an unusual sound was the work of the devil. That didn’t stop Roger Dubuis from recreating the sound through the Diabolus in Machina’s minute repeater: a complication that lets you tell the time through sound, using different tones for the hours and minutes. This unusual take on the complication is also matched by the watch’s irregular dial design, which is an imploded version of Roger Dubuis’ signature star motif. To make things even more interesting, they’ve also placed a tourbillon, adding to the already high technical value. Sadly, only one of these watches exist, and it has since been sold. Let’s just hope  it’s not being used for something sinister.

Openworking is one of those techniques that creates an extremely minimalist watch. Instead of focusing on the material and finish on the dial, the craftsman tries to carve away as much of it as possible. This leaves you with an “open” view of the movement–the mechanism that makes the watch work. It is a time-consuming, delicate discipline, and one that Speake-Marin is clearly skilled at. The One & Two Openworked Tourbillon barely has a dial to speak of, and this lets you watch the tourbillon more closely. Sharp details, a highly technical complication, and a view of the movement mark this piece as a standout.

Laurent Ferrier—the founder of the eponymous watchmaking house—was a race car driver in the ‘70s, having competed in the grueling endurance race, 24 Hours of Le Mans, seven times and claiming a victory in the two-litre prototype category in 1977. This experience with race cars has lent his creations a certain sporting “feel.” While the Grand Sport Tourbillon looks like a contemporary watch, it also exhibits the house’s classical and traditional inclinations: clean lines on the dial, elegant curves on the case and crown, and a seconds subdial at 6 o’ clock. The clear case back, meanwhile exhibits the tourbillon.

The name might be a mouthful, but that’s because Les Cabinotiers Astronomical striking grand complication—Ode to Music has a total of 19 complications to match it. The watch has so many, in fact, that Vacheron Constantin had to use both the back and the front of the watch to fit every display. The list includes some of the most technical complications in the watchmaking world. Displayed on the front part of the watch are a minute repeater, the equation of time, a sunset indication, moon phases, the age of the moon, and a perpetual calendar (you can read more about perpetual calendars in our story here).

The back displays the celestial hours and minutes and a rotating sky chart of the northern hemisphere with an indication of the Milky Way and the ecliptic and celestial equator. This isn’t an exhaustive list, but the main point of this piece is to create a watch that’s highly complicated while still being thin enough to be wearable. And in this regard, the watch succeeds, coming in at 45mm in terms of case size, and a fairly svelte 12.54 thickness.

You can read the first part of the story here