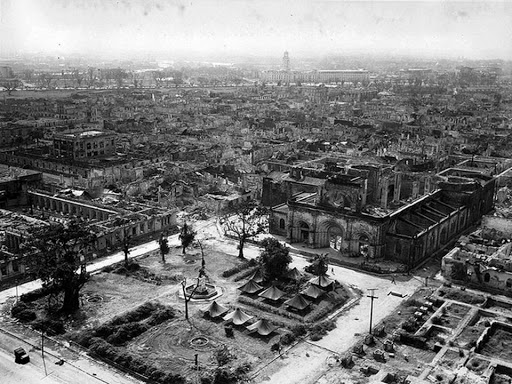 Remembering the Tragedy that Destroyed the Philippine Capital in 1945

A 75th anniversary is an appropriate moment not only to look back at what had been, but to mark a milestone. We succumb every moment to the struggles of the present day, but commemorations like this help us pause to remember the struggles that had gone before, looking back at this landscape of memory fading into forgottenness.

This month, the Philippines commemorates the 75th anniversary of the Battle of Manila in 1945, as part of the year-long commemoration of the liberation of the country from Japanese rule. The Battle of Manila lasted from 3 February to 3 March 1945, and still remains one of the most painful episodes of the country’s history. The battle engulfed much of the Philippine city, making Manila the second most devastated Allied capital in the Second World War, next only to Warsaw, Poland. The destruction was so total that a lot of the urban problems in Manila lasting to this day are because of the scars left by that battle.

Manila Before and During the War

Perhaps it is best first to remember how Manila was known before. In a 1938 travelogue film directed by Andre de la Varre, entitled “Manila Queen of the Pacific,” we are shown a city where the east meets the west, where commerce and the arts flourished. It was a city with wide avenues, lush parks, wide streets with tranvias, with buildings of architectural wonders—art noveau, art deco, neo-classical. And who could forget the esteros that were likened to those of Venice? It was a city, which, while having urban problems of its own, was still full of optimism and energy, as at the time the country was nearing its eventual independence from the United States.

The city was the fitting capital of what Douglas MacArthur would call the “Citadel of Democracy in the Far East.” While the Japanese threat was not completely unexpected, Filipinos in general believed that the Japanese didn’t stand a chance against the Americans. Everything changed when at around 3:00 AM on the 8th December, Philippine local time, the Japanese suddenly attacked Pearl Harbor in Hawaii, where the U.S. Pacific fleet was docked. With the fleet devastated, the Japanese began the invasion of Southeast Asia in a matter of hours. By New Year’s Day of 1942, the Japanese had taken Manila. And so began the Japanese occupation of the country.

It was only on the 20th of October 1944 that new hope was kindled. The Allied forces successfully landed in Leyte, with the new Philippine president Sergio Osmeña. The entire operation was thanks to the vast underground network of Filipino guerrilla cells all throughout the archipelago. Upon hearing the news, Manileños waited in anticipation for the freedom they long sought. By January 1945, the Allied forces successfully landed in Lingayen Gulf and Batangas, with the goal of having the two forces converge in Manila to retake it. General Douglas MacArthur hoped that the Japanese would leave Manila just like when he declared it an Open City in 1941, to spare it from bombardment. But that wasn’t meant to be.

The Destruction of the City

Reports came in from the Filipino guerrillas that the Japanese had blocked all means of escape for the Manila residents. Boats were burned, supplies were depleted in markets, and the streets were filled with pillboxes, foxholes and mines.

In early February 1945, as the Allied forces liberated the University of Santo Tomas—which had been converted into an American internment camp by the Japanese—the Japanese began burning almost all of Tondo and Binondo. They also destroyed all of Manila’s Pasig river bridges. It was a desperate attempt to slow down the Allied advance from the north.

It was here that the Manilenos’ ordeal began. In several parts of the city, the Japanese began systematic massacres. Foreigners were not spared. The Japanese would burn down houses and buildings, as civilians would attempt to flee, only to be met with bullets and bayonets. Others would be captured, and with hands tied, they would be led along a street corner, and then executed. Even more were just hiding in the safety of hospitals, consulates, and schools with other refugees, but would be gunned down indiscriminately. A chilling order on a piece of paper discovered by the Allied soldiers in the city was discovered, dated 13 February 1945, read:

When Filipinos are to be killed, they must be gathered into one place and disposed of with the consideration that ammunition and manpower must not be used to excess. Because the disposal of dead bodies is a troublesome task, they should be gathered into houses, which are scheduled to be burned or demolished. They should also be thrown into the river.

The battle itself grew fiercer by the day. U.S. General Robert Beightler of the 37th Infantry Division reported, that the battle was fought “building by building, floor by floor, and room by room.” The Allied forces also bombarded many of Manila’s infrastructures so as to have the hiding Japanese soldiers go out in the open.

When the battle ended, almost all of Manila had been razed to the ground. The Philippines’ very own capital had become a pile of rubble and pillar of smoke. Countless national treasures, artifacts, and documents are lost forever. And underneath the destruction was an estimated 100,000 civilian dead. Families, professionals, prominent figures in the Philippines, and other nameless figures were killed. The atrocities committed were unimaginable. It is perhaps a lesson of war, even in the atomic bombing of Hiroshima and Nagasaki, that no matter whose side won the battle, it would always be the civilians who take the brunt of suffering and death.

One is reminded of the late great Filipino writer, Nick Joaquin, who in 1950 wrote to life his fictional characters—Don Lorenzo Marasigan and his two daughters, Candida and Paula—in a play entitled “The Portrait of the Artist as Filipino.” Joaquin bestowed upon these three characters who lived in the Old Manila the ideals that Joaquin believed this historic city once stood for. These lines always bring tears to the eyes, as the words, at first, succumb to grief but then rise again, defiant and triumphant:

“They are dead now—Don Lorenzo, Candida, Paula—they are all dead now—a horrible death—by sword and fire… They died with their house and they died with their city—maybe it’s just as well they did. They could never have survived the death of old Manila.

And yet—listen!–it is not dead; it has not perished! Listen Paula! Listen Candida! Your city—my city—the city of our fathers—still lives! Something of it is left; something of it survives, and will survive, as long as I live and remember—I who have known and cherished these things!

Oh Paula, Candida—listen to me! By your dust, and by the dust of all generations, I promise to continue, I promise to preserve! The jungle may advance, the bombs may fall again—but while I live, you love—and this dear city of our affections shall rise again—if only in my song! To remember and to sing: that is my vocation.”

This Manila still lives and still persists, beyond the landscape of frail memory, into recorded history.

View the gallery below to see Manila in 1945: