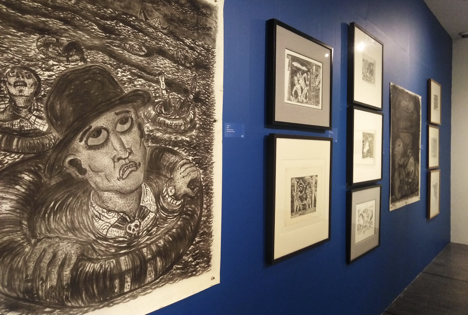 Mara is an artist and a writer who graduated from…

The award-winning artist uses his own internal dialogue to capture the world around him.

Everyone has been an artist at some point in their lives. Armed with a box of rainbow crayons and a trusty sheet of bond paper, an eager child would begin their artistic journey drawing houses, trees, people, or simply scribbling away until their crayons would snap in two. Art can play a formative role in helping people understand the world around them. It is this intermediary power of art that Negros-born artist Charlie Co evokes in his retrospective exhibit “The World According to Charlie Co”.

“The World According to Charlie Co” gathers together an ample collection of the artist’s sketches that he created over several years, where he would use his distinct visuals to reflect his own internal dialogue in reaction to the world around him. Ink, oil pastel, and charcoal sketches adorn the walls at the Ateneo Art Gallery as curious figures of a grotesque and melancholy nature greet viewers from behind glass frames and enclosures. They allude to an artist with an established visual iconography—one that may alienate and captivate his viewers at the same time.

Charlie Co is one of the many prolific artists to come from Bacolod City. He has become a household name in the Philippine art scene and has also shown his work in Japan, Australia, Singapore, Brazil, and China. In 1990, the Cultural Center of the Philippines granted him the prestigious Thirteen Artists Award. Co is an incredibly influential proponent of the Visayan art scene, being one of the founders of Orange Project, a contemporary art gallery in Bacolod’s Art District. He is also notably one of the spearheading figures behind Viva ExCon, the largest visual arts exhibition in Visayas and the longest-running biennial art convention in the Philippines, currently on its 30th year.

For all of Co’s active engagement with his peers in the art community, his art consistently elicits a personal experience. Instead of sketching or painting true to life, he opts for highly stylized folk rendering, emphasizing thematic content over realism. On paper or canvas, he portrays mysterious actors dressed in elegant, theatrical clothing, as they traverse surreal environments, allowing viewers to feel as though they are catching a glimpse of Co’s obscure yet deeply intimate dreamscapes.

According to the artist: “A painter is also a visionary, helping people understand what is going on in his environment by creating something visually powerful. But one should consider that an artist should get right in his inner self first, before anything else.”

Several of the works on exhibit were executed without color, and when color is present, it pops out starkly. Bright greens, violent reds, deep blues: Co’s use of color is purposeful, serving to enhance the emotional and narrative qualities of a work just as much as its bare forms do. Coupled with this eye for color is a tactile character to the works, from the dynamic and textural strokes, to the torn ring-bound edges of the paper having come fresh off of a sketch pad. Looking at these characteristics of the sketches, one can almost imagine Co in the act of drawing or tearing so that the works represent suspended moments of artistic play.

Just as telling are his sketches featuring religious subject matter: colorful crucifixions that convey pain and the Virgin Mary in anguish. Many natives of Negros would be familiar with a heavily religious upbringing, and for artists, this commonly shows in their works. Following in the traditions of fellow Negrense artists Nunelucio Alvarado and Alfonso Ossorio, Co infused religious motifs with folk symbolism, resulting in works that appear more introspective than conventionally religious.

No matter how enigmatic his works may be, Charlie Co always conveys a sense of story. He may be depicting allegories for political greed, religious retellings, personal histories, or unfamiliar characters whose narratives may or may not be clear. He does this through an adept eye for composition and a child-like playfulness in exploring visual language. “The World According to Charlie Co” invites viewers to see the world through one artist’s eyes and thus look back upon their own perceptions. Years after childhood and armed again with that familiar crayon and paper, how would one now choose to illustrate their lives and the world they have been shaped by?

“The World According to Charlie Co” is on view at the Wilson L Sy Prints and Drawings Gallery in the 2nd floor of the Ateneo Art Gallery from February 9 to July 5, 2020.

Mara is an artist and a writer who graduated from the University of the Philippines with a degree in Fine Arts, majoring in Painting. Some of her favorite conversation topics include art history, comic book cinematic universes, and fitness wear. She is an avid yoga practitioner but will never, ever say no to some mint chocolate chip ice cream.