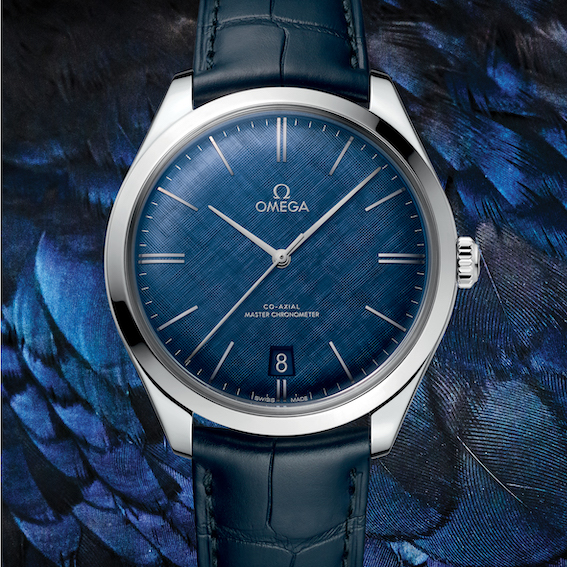 Here’s a pair of Omega watches that would look good in almost anything.

It’s easy to fall into the trap of thinking that Valentine’s day should be in theme: red roses, chocolates, dinner at someplace exotic. Nothing wrong those things, of course. Red is in season, and that end of the color spectrum will always be associated with passion and love.

Still, when you’re shopping for a gift—especially something to be worn—you’ll want something that won’t just be in season for a single month.

Omega’s proposition is a pair of watches from the De Ville Trésor line that are subtle and timeless in appearance. All that, and they have a bit of history to them.

The Trésor is a line that traces its roots to 1949. Released as a collection of slim dress watches, the original Trésor embodied the aesthetic of the era: classic shape, clean lines, and a solid dial. Overall, a pristine layout, without too many frills. Still, it was this restraint that made the design work.

You can still see the influence of the original Trésor in today’s Omegas, since much of the De Ville line continues to show the same restraint, even when they decide to throw in more complications (like tourbillons and chronographs).

But we’re here to talk about two particular Trésors for Valentine’s Day, and it’s easy to imagine wearing these as a matching pair.

For Him: De Ville Trésor 40mm

The 40mm version is a dressy, stainless steel three-hander (hours, minutes, seconds) with a date display window at 6 o’clock. Elongated indices mark out the hours, and are highly legible against the blue dial.

But the dial is what makes it stand out. At a glance, the textured blue dial will remind you of the linen used in classic menswear, such as an unstructured Neapolitan jacket. And while it seems like a small detail, this gives the watch some versatility. The linen-like texture will make the watch pop against a formal suit and a shirt cuff, but you can still wear it while dressed down in a safari jacket and casual trousers. If you’re looking for a watch to wear with anything, this would fit the bill.

The watch is powered by the manually wound Master Co-Axial calibre 8910, and is a master chronometer. This means the movement has been certified as one of the most accurate mechanical timekeepers in modern production (you can read more about chronometers here)

This means the watch has a high degree of accuracy, and at a hair over 10mm thick, you can basically wear it anywhere.

For Her: De Ville Trésor 36mm

This one is a little more dressed up, with diamonds set into curving lines that run partially along the bezel to the lugs. It’s a tasteful execution of the art of gemsetting, which can sometimes be a bit of a  hit or miss when it comes to watches. To add a bit of understated flair, the crown has been polished with red liquid ceramic and topped with a single diamond.

Still, the diamonds don’t overpower the white dial, which is a lacquered mother-of-pearl. Similar to the 40mm Trésor, it’s a watch that stays firmly in the realm of classics and can be dressed up down. This is a piece that would go well with a little black dress, a red jumpsuit, or even jeans and a white top.

The watch runs on Omega’s Calibre 4061, which is a quartz movement that won’t need any winding. It’s a way to wear a quality timepiece without having to worry about too much.

Either way, these two pieces are solid picks as gifts for Valentine’s, and the fact that you can basically wear them with anything means that you’ll be getting a lot of value out of them. So whether it’s a long drive to the countryside or a flight to anywhere in the world, you can both wear timepieces that will never be truly out of place.