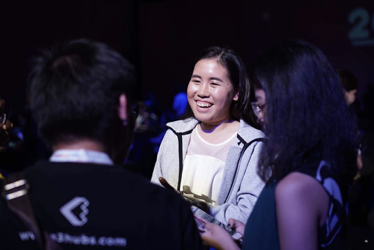 At a time when many teenagers are thinking about college, this young STEM advocate was already fighting for gender equality and youth empowerment.

The past few years have witnessed a rise in the role of women working in STEM. These women have defied the odds in a largely male-dominated field and continue to work not only to excel in their respective careers, but to encourage more women to do the same. Overcoming gender barriers in such a broad discipline is something not many people are able to do, and even more so at the tender age of 15.

Audrey Pe is the founder of WiTech (Women in Tech), an organization that seeks to both eliminate gender biases for women in STEM and to make technology and tech education more accessible to Filipinos from all sectors of society. Before finishing high school, she was already laying the foundation for something she had hoped would change fellow youths’ lives for the better.

Audrey was first drawn to studying technology through her computer classes in middle school. And aside from garnering a greater appreciation of coding, she was also able to fully realize the powerful hold technology has on society.

“What drew me to tech was realizing how linked it is to my everyday life, but what kept me pursuing it was the need to understand better how tech impacts our world and vice versa.”

“Tech really interested me at that moment, but what made me want to study it was when I started to read articles and watch talks online about how tech affects society from an ethical and legislative standpoint… I saw the disparities between how a lot of developed nations had accessible tech curriculums and started getting interested in how to promote and teach tech education within our country.”

But for all of Audrey’s zeal for working and studying in the field, she was met with the harsh reality faced by many women in tech. STEM did not offer the same opportunities to women that it did to men, and Audrey was told this was not where she belonged. Today, women in STEM are still largely outnumbered by men. Gender barriers have forced women to draw the shorter end of the straw in terms of job security, pay, discrimination and harassment, and continued social norms that enforce the idea that women are not suited for the world of tech.

Audrey’s road to founding WiTech began with persistent research. It all began with awareness. She reached out online to women who had gained success in different STEM fields and interviewed and wrote about their achievements.

Audrey then started WiTech first as a student organization with like-minded peers, and eventually developed it into a community organization. In 2017, it hosted its first Women in Technology Convention (WiTCon). By 2019, Audrey was able to officially register WiTech after turning 18-years-old.

“It never occurred to me that I should wait until I’m older to start acting upon the issues of gender inequality and lack of tech education in the Philippines, because I honestly felt like if I didn’t act upon those issues, very little people would. I wanted to catalyze change, and I wanted to do it as fast as possible.”

Audrey’s journey in STEM starting at such a young age makes for a refreshing story, as the combination of youth and technology is often perceived as being negative. From online predation to an overdependence on technology—many of these phenomena are pegged as the ailments of an aloof and oblivious Gen-Z culture that are seemingly caused by an unhealthy relationship with technology. Older generations see the issue of tech and youth as an issue of safety rather than encouragement.

Part of Audrey’s mission with WiTech is to show that tech is not something to be demonized, but instead used as an instrument of change. Rather than preach prevention, she sees proper education as one of the cornerstones of responsible and safe use of technology.

“We can have a lot of talented programmers out there, but if no one is holding them accountable for what they create, that implies a very dangerous future.”

Through their Wi-Teach programs, WiTech aims to help extend the opportunities in STEM to underprivileged communities in the youth sector. Among the program’s notable endeavors was a trip to Marawi in 2018, where Audrey and WiTech’s co-marketing head Annika Gozum conducted a workshop on computer literacy and basic tech education for the students of Mindanao State University. WiTech also supplied the university library with their very first laptops to not only help with school-related activities but provide an avenue for interested students to further delve into STEM.

“Until we get the infrastructure, material, and mentors needed to encourage students to go into tech, it’s going to be very difficult to get our tech scene up to speed with that of the US or UK. That’s essentially what motivates me to do what I do with WiTech. My end goal and all our projects are geared towards the goal of ensuring that one day, every single Filipino, regardless of gender or socioeconomic status, has access to resources that can guide them into entering the tech scene and using those tools for social good.”

Audrey’s plans for this year see her beginning her studies at Stanford University, where she will be majoring in Science, Technology, and Society. Being right next door to Silicon Valley itself, she hopes to garner as much knowledge and resources as she can to allow the scope of WiTech to expand even further for 2020 and beyond. On WiTech’s busy roster for the upcoming year are the launching of WiTCon Baguio—the third WiTCon in partnership with Accenture—and the initiation of even more WiTech chapters locally and even internationally. The organization is looking to extend the reach of Wi-Teach to even more marginalized communities and to continue working to stabilize its future as a non-profit.

The fight for gender equality in STEM still has a long way to go, but young pioneers like Audrey and the team behind WiTech are slowly starting to level the playing field. By helping make tech education and opportunities accessible for all youths, Audrey is helping to ensure that future generations of STEM professionals are equally comprised of men and women alike, coming from different social statuses. She has nothing but enthusiasm for the future and in her mission to empower youths to be catalysts of change.

“Don’t let anyone make you feel like you don’t belong in STEM. Find a community of like-minded people and look for ways to apply STEM to a cause bigger than yourself. If you do that, you’ll be anchored to your purpose and have a ‘why’ that can motivate you to get through especially tough days.”