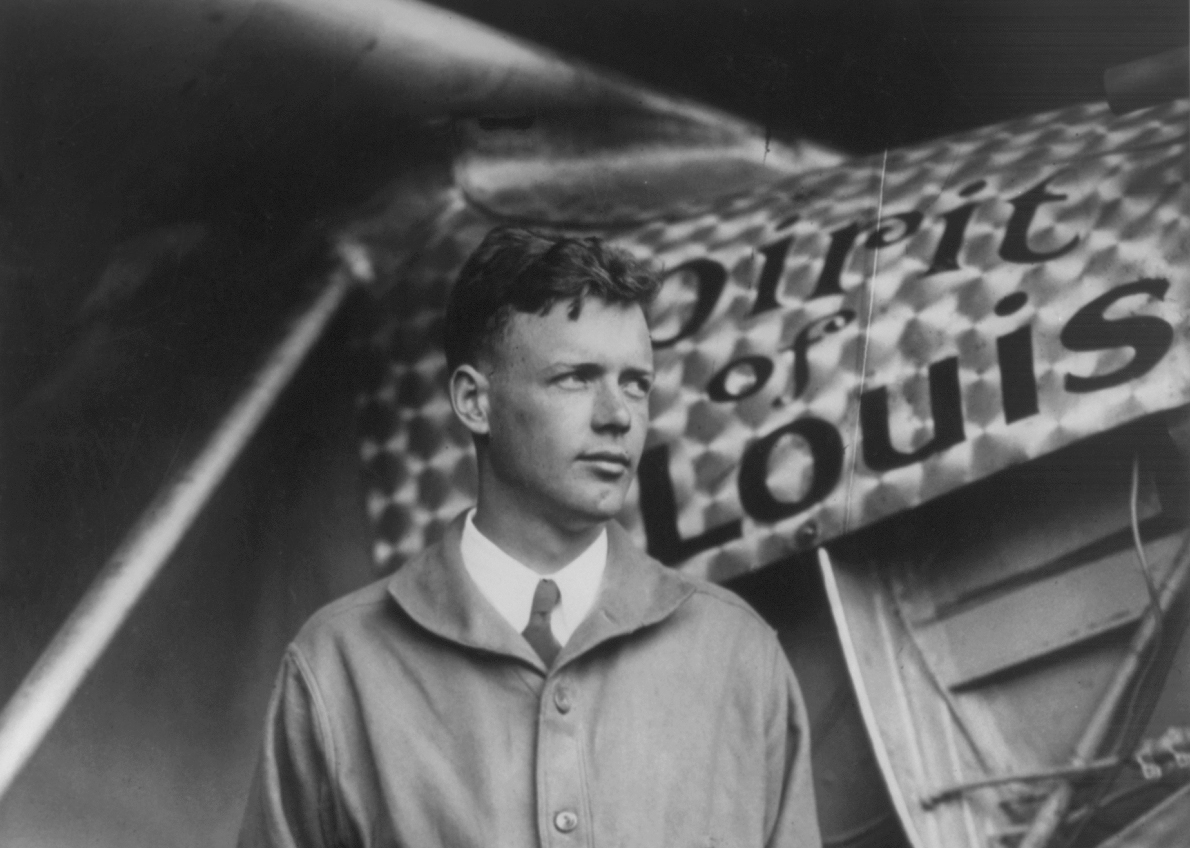 In 1927, Charles Lindbergh flew the Spirit of St. Louis across the Atlantic, making history as the first pilot to do so alone.

The feat put aviation on the map, and Lindbergh into the spotlight. But the life that awaited him after was far more trying.

May 20, 1927. 7:52 AM. It was an opportunity that Charles Augustus Lindbergh had unknowingly prepared for his entire life. It was his shot at making history—the first trans-Atlantic flight from New York to Paris made by a single pilot—a test of the limits of his endurance from 10,000 feet up in the air.

It was also the flight that almost didn’t happen.

Born in 1902—a little over a year before the Wright brothers steered Flyer I toward its place in history—Lindbergh grew up with his eye on the sky. At a time when flying gigantic metal birds across long distances was still a novel idea, Lindbergh felt the urge to reach new heights, literally and figuratively. He ended up hitting the brakes on his mechanical engineering studies at the age of 20, opting instead to perform aerial stunts as a barnstormer.

Lindbergh’s career as a daredevil pilot came to a halt, though, when he enlisted in the United States army two years later. He eventually became an Air Mail pilot on the St. Louis-Chicago route—and likely would have stayed that way, were it not for a businessman’s intriguing challenge.

For nearly a decade, New York-based hotel owner Raymond Orteig had been searching for an intrepid aviator willing to make one long, nonstop trip from New York to Paris. British pilots John Alcock and Arthur Whitten Brown had already crossed the Atlantic via a modified Vickers Vimy bomber in June 1919, making them the first pilots to successfully complete a transatlantic flight. That flight, though, had been from St John’s in Newfoundland to Connemara in Ireland. A transatlantic flight from New York to Paris—two of the most famous cities in the world—would attract far more attention.

That the prize remained unclaimed for so long was certainly not due to a lack of interest from the general public. Quite the opposite, in fact. By the time Lindbergh had started planning his attempt in 1927, two hopeful pilots had already gone missing, three sustained serious injuries, and four lost their lives.

As for Lindbergh himself, what he lacked in dollars, he made up for in drive. With assistance from some St. Louis businessmen, Lindbergh was able to scrounge up USD 18,000. While this amount was significantly lower than what other challengers and their deeper pockets had access to, Lindbergh remained undeterred. He quickly began working on his plane, which he christened the Spirit of St. Louis as a tribute to his benefactors.

The Spirit of St. Louis was a bold, if counterintuitive, choice for this long-distance flight. Equipped with only a single J-5C Wright Whirlwind radial engine, 1,704 liters of fuel, and no parachute or radio, the Spirit of St. Louis clocked in at 5,135 pounds. Those who saw the plane, which was mostly made out of cotton fabric and French linen, could not believe that Lindbergh would attempt a transatlantic flight in such a seemingly ill-suited aircraft.

All of this, coupled with his insistence on flying alone, earned him a rather unsavory nickname in the papers: the “Flying Fool.”

Lindbergh, on the other hand, felt anything but.

When Lindbergh arrived in New York, inclement weather threatened to delay his fateful flight. He made the decision to proceed, though, when weather forecasts on May 19 predicted clear skies in the coming days. Lindbergh wasted no time, pushing through with his planned 5,632-kilometer  flight from Long Island to Paris the next day.

Carrying nothing more than two canteens of water and four sandwiches by way of provisions, Lindbergh strapped himself in. Due to the runway being drenched in rainwater, The Spirit of St. Louis accelerated at a rather slow pace, worrying the 500 or so onlookers who had gathered to witness Lindbergh’s attempt.

Fortunately, Lindbergh’s monoplane managed to successfully take off. The Spirit of St. Louis had a close call, though, with the telephone lines at the end of the runway, clearing them by about 20 feet  “with a fair reserve of flying speed.”

Lindbergh started to fully grasp the complexity of the challenge as the spectators slowly turned into specks on the ground. Fighting against the elements and his own bouts of sleepiness, the aviator struggled to maintain a consistent distance above the ocean, at times hovering dangerously close to the surface in order to avoid fog and whatever else nature threw at him. At times, he even had to fly blind; aside from his refusal to use radio navigation gear, he was not quite adept at astronavigation, and thus could not rely on the sun or the stars to guide his journey.

Almost midway through his flight, Lindbergh was momentarily tempted to shut the windows of the Spirit of St. Louis to keep himself warm. However, he realized that the steady stream of cold air was one of the few things keeping him awake—and thus, alive—through his flight.

After precisely 33 hours, 30 minutes, and 29.8 seconds of flying (and 55 hours of wakefulness), Lindbergh successfully landed at the Le Bourget Aerodrome in Paris, France, reportedly to the delight of a crowd of 150,000. If this were a rock concert, the landing spot was the mosh pit, and Lindbergh was the frontman, hoisted above the ground and carried by his cheering fans.

Some even grabbed themselves a few souvenirs from the plane, right in the midst of aviation-fueled hysteria. Indeed, the Spirit of St. Louis lost quite a bit of its linen and fabric coverings on that day, but absolutely none of its luster.

Overnight, Lindbergh had become famous. And the crowd in Paris was only just the beginning.

Oh, and he also became TIME Magazine’s first-ever Man of the Year.

Lindbergh’s historic flight may have ended there, but his fame and career were just beginning to soar.

Hailed as a national hero, the former air mailman toured 49 states and 92 cities, and received numerous awards and a steady stream of recognition, including the Medal of Honor and the Distinguished Flying Cross from U.S. President Calvin Coolidge. It was during one of his many tours when he met Anne Morrow, the woman he would eventually marry.

Lindbergh became an aviation consultant for his country, and after teaching his wife how to fly a plane, they plotted travel routes for airlines across the globe. The couple settled down in New Jersey to start a family, and for a time, it seemed as if Lindbergh was finally living his idyllic life.

Unfortunately, turbulent times were just on the horizon.

In 1932, their first child, Charles Lindbergh Jr., was kidnapped from their New Jersey home. The kidnapper demanded USD 50,000 for the return of their child; sadly, even though the Lindberghs complied, their lifeless, twenty-month-old son was discovered weeks later in the woods near their residence. The nation mourned with the Lindberghs, calling the kidnapping and murder of their son “The Crime of the Century.” Eventually, a German immigrant carpenter named Bruno Richard Hauptmann was arrested and convicted for the crime. Despite vehemently denying his involvement in the grisly affair, Hauptmann was sentenced to death four years later.

An intensely private man who did not enjoy being consistently in the spotlight, Lindbergh dealt with the weight of his grief by effectively moving to Europe with his family, where they stayed until 1939. During this time, Lindbergh directed his attention toward more scientific pursuits, including an attempt to create a medical device that would help save his sister from a serious heart condition. In doing so, he and French surgeon Alexis Carrel, a Nobel laureate, ended up inventing what would become the precursor to the heart-lung machine.

Arguably the most turbulent time of his life came at the onset of the second World War. Lindbergh was a staunch believer that the United States should stay out of the war entirely, and he became a member of the infamous non-interventionist group, the America First Committee. Unsurprisingly, some started to believe that he was a supporter of Nazism—an accusation that gained traction and was further complicated by some rather disparaging public comments he made about the Jewish and British leadership at the time.

This turned public opinion against him. The celebrated American hero found himself branded as an “un-American” anti-Semitist. He only changed his views on America’s involvement in the war when the Japanese bombed Pearl Harbor. By then, however, even President Franklin Roosevelt had lost his faith in Lindbergh, publicly denying his request to be recommissioned into the Air Force. Regardless, the disgraced pilot managed to find a way to be of service to his country during the war, providing support as a technical adviser across 50 combat missions for the U.S. Army and Navy.

At the end of World War II, Lindbergh consulted for the Air Force. He also became an author and environmental advocate. He retired in Hawaii, eventually dying of lymphoma on Aug. 26, 1974. His house in Minnesota—the place where he was born—became a museum in his honor, and is now a National Historic Landmark.

May 21, 1927. 5:22 PM. That was when the Spirit of St. Louis landed in Paris. As he prepared the planefor its descent, Charles Augustus Lindbergh saw the c.owd waiting for him. Perhaps at that moment, he had no idea that upon touchdown, a turbulent life would be waiting in the wings for him. Perhaps, the only thing on his mind was that he had flown in a way that no other man had flown before.

It was the flight that he, and only he, made happen.