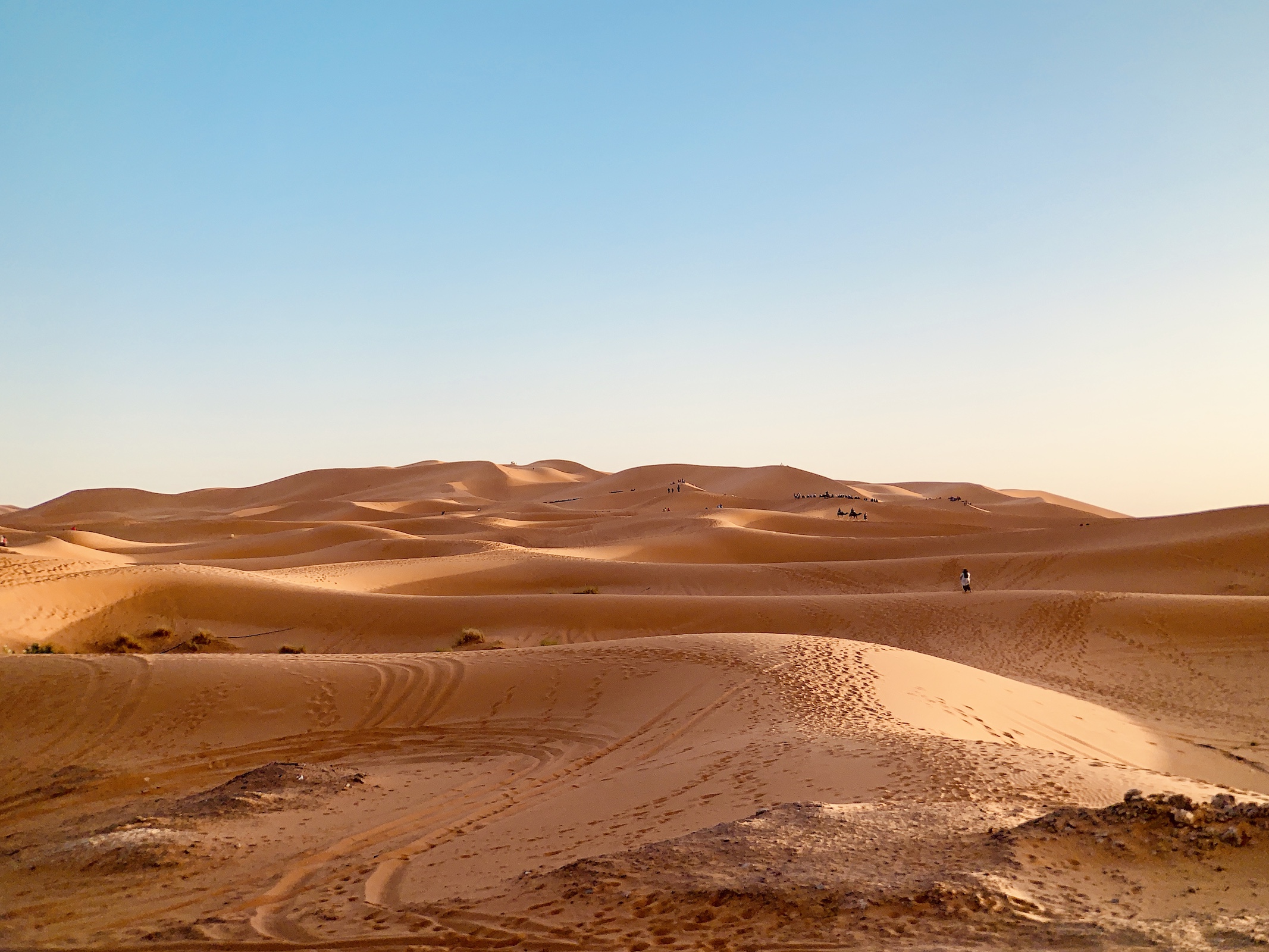 Here’s where to go in Morocco for the colder months

Times being what they are, with Google Maps and Waze pointing us in the right direction, there’s hardly a place that hasn’t been explored. Nearly every corner on earth has been seen, mapped, or otherwise photographed—all served in a stream of data that takes seconds to bring up on a phone.

Still, that will never quite show you how things really are: the smell of the winter air, the ground on your feet, the language of culture that you only ever see when you watch people move. And in Morocco we’ve seen this for ourselves, having gone on a ten-day journey that took us from the freezing Middle Atlas Mountains and across the powdery sands of the Sahara.

“Morocco is unsurprisingly so much more than that common image of the so-called camel treks across the desert or even the mystical Atlas mountains,” says Ghali Alaoui. “As a resident of Morocco, i can definitely say that it is one of those magical places that is very difficult to describe through words or even pictures. In fact, giving an accurate description of Morocco as a whole is a little bit like trying to describe a complex musical composition or a symphony.”

Ghali is the head of Insight Vacations in Morocco, a company that specializes in guided journeys across the world. That he would know his country inside out is a given, though even he, it seems, has difficulty capturing everything.

Morocco is a place where modern cities are home to ancient buildings, where the snow gives way to the desert, where people both embrace the modern and hold to the traditions handed down from one generation to the next.

This is a place so vast, so textured and contradictory, that it would take more than a single visit to begin to understand.

Still, everything has to start somewhere, and from storied Casablanca to seaside Essaouira, here’s everywhere we went:

Perhaps the country’s most famous city (partly because of the 1942 film named after it), Casablanca is largely modern and industrial, though it does still hold a certain timeless appeal. The city is a mix of Portuguese, Spanish, and French influence, coupled with its Berber origins. Walking along its streets will you give you an idea of what modern Morocco is like, all at its most urbane.

This is the largest mosque in the country and is one of Casablanca’s most prominent landmarks. Built by King Hassan II to honor his father—Mohammed V, the nine-hectare complex sits across the harbor, offering a place for contemplation.

While it isn’t the actual Rick’s Cafe from the movie Casablanca (it was shot almost entirely on set), this restaurant was built to recreate the place where Ingrid Bergman and Humphrey Bogart played out their romance. At the bar, near the smoking area, a television repeatedly plays the famous film.

Rabat is Morocco’s capital and was historically a military town. Some of the fortifications from its founding still exist, though now walked upon by travelers and residents instead of soldiers.

The minaret of an unfinished tower that was supposed to be part of a mosque, Hassan Tower was built in the 1100s, and has since remained unfinished. Right across it sits the Mausoleum of Mohammed V, where the former king, as well as his sons, lie in repose.

Kasbah des Oudaias is a keep that sits watch over the Bou Regreg river. Known as the Blue City of Rabat for its predominantly blue and white walls, it offers a view of the Atlantic ocean, which the river flows into.

Fes was founded in the 8th century, and is widely known for its Medina districts. Early in its history, a large number of Arabic families moved into the city, influencing its development and character. Today, the medinas remain ass prominent as when they were built. Perhaps even more so, given the number of people who travel to them.

This Medina is one of Fes’ greatest attractions, and is a UNESCO heritage site. With market stalls, the ancient Chouara tannery, and the oldest university in the world to remain operational—the University of al-Qarawiyyin—it is a fascinating glimpse into the past that has somehow made it into the modern age.

The art of zellige (mosaic tilework), remains alive throughout Morocco, and you can see how it’s made firsthand if you visit the factories. Clay is shaped and fired over a kiln, then glazed with enamel. The geometric tiles are arranged into patterns, which make up a larger design. It is an art that has remained largely unchanged for over a thousand years.

Located in the Middle Atlas mountain range, this village is notable for having houses built out of caves. The residents chip away at the rock walls with hammers and chisels, slowly forming rooms. The rooms are then painted with bright colors and murals, giving the caves a sense of warmth and life, even in the winter

From Andalusian music to belly dancing, Fes has a range of entertainments. Often, they can be seen while you’re dining on traditional Moroccan cooking, which is a heady mix of meat or poultry, seasoned with Berber spices and cooked in a clay pot called a tajine.

Ifran is a snow-capped city in the winter, looking more at home in the Swiss mountain ranges than in Morocco’s Middle Atlas Mountain range. While the first settlements were created in the 16th century, much of its current looks are owed to the French, who built more modern structures in an attempt to make a garden city.

The Cedar Forest of Azrou

Tall cedars line the road out of Ifran, making up part of a forest that’s more than a hundred thousand hectares. In winter, the snow in the Middle Atlas range makes the place look even less like what you expect from Morocco, and more like the Alpine region.

Along the road out of the city and heading into Erfoud, you’ll find the Ziz Gorges—a series of narrow valleys carved into the rock by the Ziz River. Throughout the drive to next stop, you’ll find that even in the open road, Morocco is never empty of things to see.

A few hours away from Ifran, the snow gives way to the oasis town of Erfoud. Erfoud lies right in the Sahara desert, and from here, it’s a short drive away to get to the dunes.

Along the roads of Erfoud, bands of nomads can be seen on the sands. Though, to hear the locals say it, there are less and less of them each year. With some choosing to settle in the urban areas instead.

For people who’ve never been to Morocco, this is the most common image that comes to mind: vast tracts of powdery sand with nomads and camels trekking along the desert. Already vast, the desert is only a part of what makes Morocco. And this is where you begin to understand how truly complex and textured the country is.

Known as the Gateway to the Sahara, Ouarzazate is a scenic city in a country that’s full of places to see. So many, in fact, that it has been used for films such as Lawrence of Arabia, Kingdom of Heaven, and Gladiator, as well as for the HBO series Game of Thrones.

A UNESCO heritage site, the Ksar of Ait Ben Haddou is a fortified city made of clay.  It used to be a trading post for the nearby areas, and has since survived to become the setting for films.

Called the Grand Canyon of Morocco, Todra Gorge lies in the eastern part of the High Atlas mountain range, near the town of Tinerhir. Once there, you can see rock climbers on the gorge’s surface, slowly trying to make their way to the top. The gorge is also home to a small stream, where donkeys and mules take their water breaks.

Stepping inside a Berber home reveals much about the local culture and hospitality. From the decor to the preparation of traditional Berber tea (a mint-laced beverage), you can stay inside and interact with your host, understanding what daily life like is for the people who live here.

Marrakesh is one of the main destinations that travelers frequent, and for good reason. A combination of urbanity, ancient structures, and culture, the city is always busy, and exploring the area will show you the pulse of Morocco as it is now.

The Medina of Marrakesh is complex of stalls, restaurants, and boutiques nestled within earthen walls. Walking across its winding streets will reveal the souks (marketplaces), where you can shop for spices, clothes, and food.

With a name that means “brilliance,” the Bahia Palace was intended to be the greatest of its kind. From the entrance to the rooms, the place is decked out in zellige tilework, displaying the luxury and sophistication of the late 19th century.

The Market Square is a place that’s rarely ever empty, being active throughout the day. In the morning, the square fills up with vendors and street performers. By nightfall, the lights turn on and it’s business as usual, with both travelers and locals taking their seats in the many street food stalls that line the area.

Built in the 1100s, the Koutoubia Mosque stands vigil over Marrkesh. And at more than 200 meters high, it’s easy to see its tower even when you move well away from the grounds. It’s said to have inspired the unfinished Hassan Tower in Rabat, which was built in the same era.

Essaouira is a fishing town that stands apart from the rest of Morocco, mainly because of how vivid the colors are. From the long stretch of beach to the sleepy seaside, this is a place that encourages people to drop everything fro the moment.

Staying by the sand is something that visitors go here for, and you can see them dot the beach in their lounge chairs and under umbrellas. Occasionally, you’ll see camels walking along the shore as well.

Much like Fes and Marrakesh, Essaouira has its own medina, though strikingly different in character from the other two. It’s less crowded and more laid-back, so you can take your time walking along the alleys and discovering the restaurants and boutiques.

The Road Back to Casablanca

While on the way back to Casablanca, we dropped by a few other sights you don’t normally see: the Oulad Salmane Market in Safi, where the way of life has barely changed in centuries; Argan oil made by hand in the traditional way; and even camels put to work pressing olives for oil.

And given how much there is to see, it would be difficult to cover Morocco in a span of days. It’s one of those places where it’s best to take a guided journey, such as the one we joined from Insight Vacations. This lets you make sure you get as much done as you can. Starting at USD 258 per day, you can book a trip through Rajah Travel.

In Morocco, things never seem to be the same from city to city. It is a place where the modern meets the ancient. By the end of the trip, you’ll remember it for its medinas, its souks, its mosques. But most of all, you’ll remember it as a place that exists as though time had forgotten to wipe away the past before building the present.