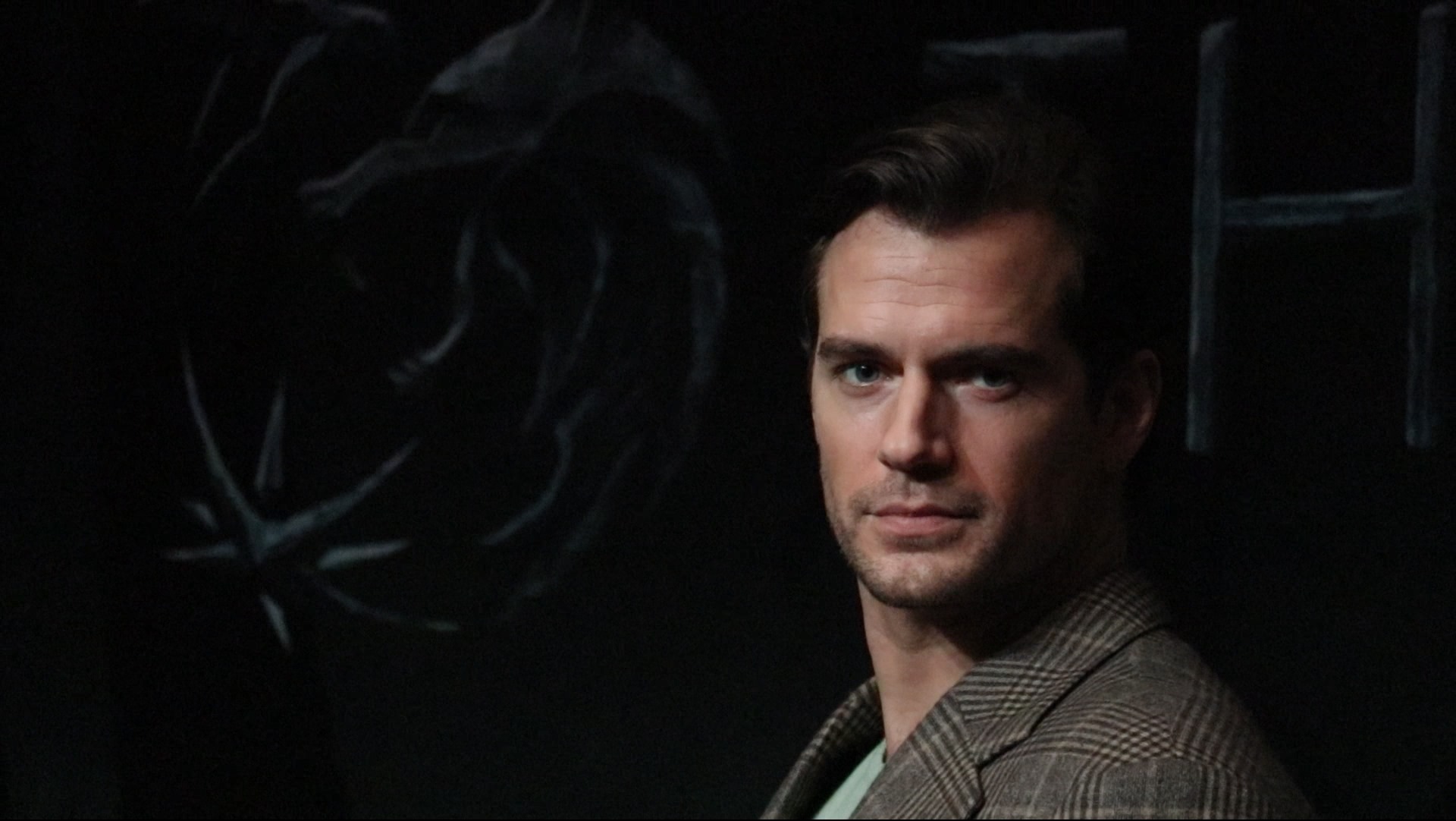 The Witcher goes live in a week, and Henry Cavill tells us what went on behind the scenes—including how he basically begged for the role.

Not gonna lie: Henry Cavill’s voice is beyond dreamy.

I think Cavill could say pretty much anything, and I would swoon. Partly it’s his accent, but also it’s his voice. It sounds like whisky being poured into a glass. It feels like a cup of hot tea on a cold day. It just sort of slithers around you and tickles you here and there, and your insides just shiver.

I suppose it’s no surprise that the host of the press conference was similarly dumbfounded. “You’re a god!” he stammered as Cavill stepped onto the stage.

I can’t say I would have been any more coherent myself.

The point of all this adoration is this: why is this beautiful man, with a voice that sends shivers all over you and a smile that inspires incoherent babbling, playing such a monstrous character?

And the answer is quite simple: he’s a fan, just like the rest of us.

Cavill is in Manila to talk about The Witcher, the new fantasy drama that’s going to start streaming on Netflix on December 20, 2019. He’s here with Lauren Schmidt Hissrich, the showrunner, to talk about the Continent, its peoples, and its conflicts.

And he’s been dying to talk about this project—because he’s a fan of the video game. And as soon as he found out Netflix was producing an adaptation of the books that the video game was based on, he made sure they knew he was interested in playing lead character Geralt.

“I called my agent, and I told them to call Netflix. And I didn’t hear back. So I called them again, and they said, ‘Oh yeah, we asked them, but there’s nothing going on there yet.’ So I told them, ‘Well keep calling until you find out what’s going on. And don’t stop calling.’ So I called them back every three days. They said, ‘Yeah yeah okay, we’ll call again. And they kept on with this, eventually, [until] Lauren already said [she was taking] meetings. They must have told her, ‘Look, you’ve got to meet this guy otherwise, he’s going to turn up at the door and be embarrassing.’ And so, we had a lovely chat about the character and about the storyline, and then she had to begin the casting process.”

Cavill is a dream, yes, but let’s face it: the real captain of this ship is Hissrich. This show wouldn’t be happening without her at the helm.

Also, how many women can manage to have Cavill knocking at their door, basically begging to be cast, and can say, no, we’re going to have a casting process?

Cavill played the Man of Steel, but Hissrich has got to be a true superpower to resist that voice, that charming smile, those eyes. That accent.

Hissrich wrote and produced quite a few Netflix shows, so it’s safe to say she knows what audiences like. Her Netflix portfolio includes Daredevil, The Defenders, and Umbrella Academy, but her other producer and writer credits are no less impressive: West Wing, Private Practice and Parenthood.

This is her first foray into fantasy. With so many fantasy novels, shows and films being written by men, the inevitable question was asked, how are you approaching the project from a woman’s perspective?

“I never think of myself as a female writer,” she said. “I’m just a writer trying to tell that story.”

The applause in the room was deafening. The star that is Cavill may have gotten cheers when he walked in, but Hissrich just showed everyone what it means to be a real showrunner.

(You know, unlike another show criticized for quite a few writing failures.)

“And for me, you know, I like to describe the story of The Witcher as a broken family coming together. In this family there’s three members. There’s Yennefer and Ciri, and we want to make that collision course of them coming together the most interesting, [so] they all have to be interesting characters.”

So how might a female writer treat female characters in a fantasy show differently?

“Geralt, in the stories that we’re pulling from, he’s an incredibly fleshed out character. [Author Andrzej] Sapkowski spent a lot of time [on this] so that we understand Geralt’s soul and his damage, where he’s coming from, where he wants to go, his dreams, all of that. And I just wanted to make sure that we understood the same about Ciri and Yennefer. And I think what happens when you see these characters meet, making sure that we love these characters for who they are, will make their interactions all the spicier.”

So here’s Cavill, begging for the role, and Hissrich, focused on bringing to life a story revered across several books and video games. How did we get from that point to this press conference?

No shortcut. Cavill actually had to audition. “I got a call saying, ‘Would you like to audition for the role?’ And I was on holiday at the time. I canceled my holiday and went to New York, and we had an audition there, and the rest is history.”

“Geralt, in the stories that we’re pulling from, he’s an incredibly fleshed out character. [Author Andrzej] Sapkowski spent a lot of time [on this] so that we understand Geralt’s soul and his damage, where he’s coming from, where he wants to go, his dreams, all of that. “

But you know, maybe that voice worked after all. Hissrich shared, “You know, when I first met Henry, we had such a good meeting, and we really got to talk about the character and the way that I wanted to tell the stories. But I was very honest, and I said, we don’t have scripts yet, we haven’t started the process, I don’t have a job to offer you. And then we did go through the casting process and we met 207 other potential Geralts. And at the end of the day what I realized is that, as I’m writing those scripts, I always had Henry’s voice in my head.”

Turns out I’m not the only one entranced by that voice.

“So when we met again, we just immediately kicked off a great relationship. I think what a lot of people don’t know about actors, specifically on television, we shot for 178 days. That’s a lot of days, and we work very long hours, mostly through the night and the rain and the snow, since we shot in Central Europe. You count on your actor not just to embody the character, which obviously Henry does incredibly well. But you also count on your actor to be the leader on set, to show up, to set the tone. One of my favorite things about Henry is how seriously he takes a job. He not only shows up prepared, knows Geralt’s inside and out, better than I do now. But he also shows up on time, ready to work with a great attitude. And to me, that’s all I want at work every day, and so that partnership has just been amazing.”

He may have charmed her, but he still had to work for the role.

Cavill plays Geralt, who is, “incredibly fast, strong, with great endurance, having longer life than your average human. He can also cast basic spells. And this is all part of a process which they gain from going through chemical trials as boys, and various amounts of training. And these spells are  not as strong as the kind of spells you’d have from a sorceress.”

Oh yeah, and he fights monsters. Big ones. Though some would say he’s a monster himself.

I still wonder how such a beautiful man is going to do that. I guess we’ll see.