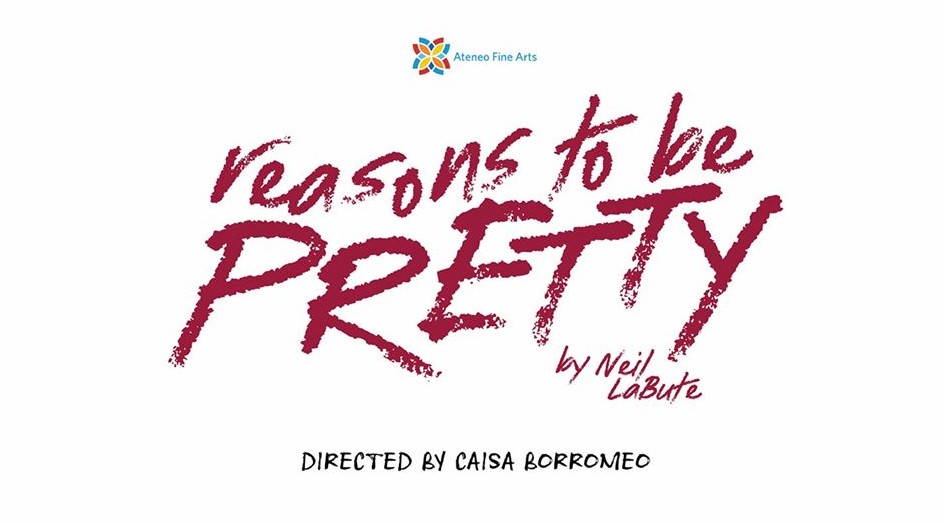 “Even if I was not cute or close to that – unattractive by world standards, don’t I wanna be with someone who finds me beautiful?”

Neil LaBute is no stranger to writing about ugliness, having written very bluntly about taboo topics for nearly three decades. In reasons to be pretty (intentionally in lowercase), American playwright forces his audience to reevaluate their own preconceived notions of what “pretty” and “ugly” really mean. Taking on the daunting task of adapting LaBute’s play are a team of senior students and alumni from Ateneo de Manila University. The production will run from November to December.

While boasting a cast of relatively young talents, the team behind “Reasons to be Pretty” already has an extensive background in theater behind them. Ian Pangilinan, playing the role of Greg, has starred in local productions of “Rent” (2018), “Spring Awakening” (2019), and “Once on This Island” (2013). Marissa Teodoro, one of the actresses playing Carly, has been in “Kubkob” (2016) and “Gilgamesh” (2018), and has served as stage manager for “Mirasol” (2019) and costumes head for “AKO: Alpha Kappa Omega” (2019). Leading this powerhouse group are a powerhouse duo themselves: director Caisa Borromeo and advisor Missy Maramara.

For Maramara and Borromeo, the task of tackling issues arguably very relevant for women through a script written by a man presented an opportunity rather than a challenge.

“It’s not siding with man or a woman, which is what I like about the show. It talks about everyone, and they’re all honest, real issues that everyone goes through every single day but are so scared to talk about,” Borromeo stated.

“What I really like about this project–yes, it’s written by a male playwright, but that’s why it was so important for us to get a female director. So that she can balance that voice,” Maramara added.

“Reasons to be Pretty” features a small cast of characters: Steph, Greg, Carly, and Kent. The play begins with a heated argument between couple Steph and Greg, ending in Greg admitting that Steph’s face is “regular”. LaBute presents an intimate commentary on human relations that encourages its audience to reexamine the way they interact with others. For Borromeo, one of the main takeaways she wants audiences to have from the play is the need for empathy.

“I just want people to talk and have a conversation. What is okay, what is not okay. What is beautiful, what is not beautiful. What are you allowed to say to your girlfriend? What are you not allowed to say to your girlfriend?… I think what Neil LaBute was able to grasp was that he was able to represent both man and woman, and show an understanding.”

The show also presented a challenge for the actors, who had to embody the idea of being “regular” and through their characters, confront their own notions of prettiness–all in front of an audience.

“The process for me was actually very hard,” confides Stacey Renei Dy, one of the alternating actresses playing Steph. “It was difficult, of course, [because] it requires a lot of vulnerability for me as a person and as an actor. And you just really have to push yourself to go there in order to justify the story of your character.”

“I think the hardest part about being an actor is that you have to use your body as your material,” Maramara expressed. “And your body will be judged. Your material will be judged. And especially with a topic like this on being beautiful–there’s so much pressure on an actor to look a particular way, right? This is on top of the fact that you’re a girl; you have to look a particular way… So, it’s hard to be ugly. No one wants to be ugly. It’s hard to be pretty, right?”

Helping to lessen the pressure for the actors is having to perform the show on familiar ground. As a thesis production under the BFA Theatre Arts program, the play will be staged at the Ateneo de Manila Fine Arts Theater. For Maramara, it is important for the team to begin on home turf before branching out.

“Personally, I find it very encouraging,” MJ Vitug, the other alternating actress playing Steph admits. “The thing about maybe staging it in Makati, if our primary audiences were – I don’t wanna assume – but [sort of] strangers to us and adults maybe–they have a better grasp of their individualities and personalities and how they see themselves because they’ve grown in that way. But our characters are in their early to mid-20s, and we’re approaching that age… And so, to be able to show that to people who know us and for it to really resonate with them, I think it’s really important that people our age can see this.”

Maramara confesses she was initially apprehensive about taking on a script that was “glaringly American”. LaBute likes to directly reflect his social environment in his scripts, and so the play is evidently written to fit an American context for an American audience. The topic of beauty is one that can be especially relative to cultural standards. The challenge for Maramara then became a matter of “transcending the cultural limitations of the text” and translating it into something that could resonate with a universal audience on a personal level.

Backed by some of today’s most accomplished talents in Philippine theater, Ateneo de Manila’s senior Theater Arts students shine light on questions that women and men alike have to face every day but have yet to confront the answers to.