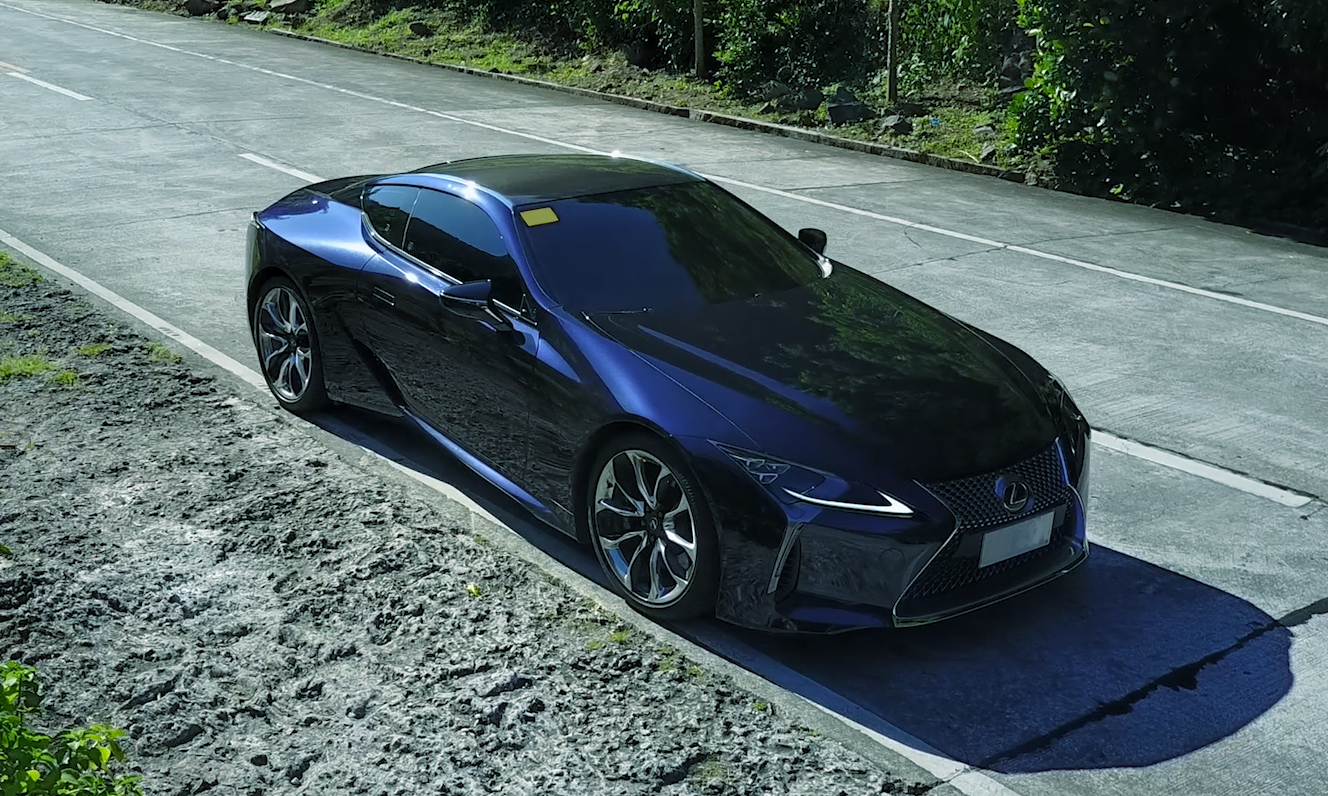 One evening, I received a note from a friend at Toyota. The note read: “Would you like to try a Lexus?” I immediately replied that I would be happy to, not realizing that this short exchange would put me in the driver’s seat of one of the most memorable cars I have had the pleasure of driving.

Take a seat, grab a drink, and let me tell you about the Lexus LC500.

The story began back in 2012, at the Detroit Motor Show. Lexus debuted the LF-LC concept, manifesting a striking new design language that would carry the marque into the future: clean lines, a distinctly futuristic look, a short rear coupled with a long hood, headlights in the shape of an “L”, and a massive mesh grill wrapped in aluminum. In the years that followed, the influence of these designs began to appear across the Lexus model range. The mesh grill and the “L” shaped lights for example have come to be known as features that are distinctly Lexus.

Now, seven years later, the LC500 is the LF-LC concept made real, and thankfully the production model has managed to retain most of the concept’s design features in their original form.

I arrived at the Lexus Manila showroom in Bonifacio Global City at noon on a Tuesday to collect the test unit. As I slowly walked around the LC500, I marveled in its “Deep Blue Mica” color. How deep, you ask? So deep you will discover the wonders of the universe if you stare at it long enough.

The shape was classic grand tourer, with a long low-slung hood, curves in all the right places, and a pinched waist right before the rear air ducts, all very sexy.

The dimensional tail lamps were inspired by the glow of a jet’s afterburners. When they are on, eighty LEDs on either side create an even illumination with impressive depth and no visible grain. The effect is spectacular; I felt like I was about to fly a stealth fighter.  The triple projector headlamps are sharp, angular and striking. Seven years after the concept car’s debut, these headlamps still look like they came from the future.

Adding a touch of sportiness to the futuristic styling is a black carbon fiber roof, which is intended to reduce weight, lower the vehicle’s center of gravity, and make for more responsive handling. For putting power to the ground, Lexus fitted the LC500 with run-flat tires on 21-inch forged alloy wheels.

The interior showcases the very best materials, with incredible attention to detail and a level of finish that is probably the best in its class. The front seats are perfectly supportive, and engineered to sit the passengers low, and as close to the vehicle’s center of gravity as possible. As if that were not enough, the seats are ventilated and fans inside the seat backs can circulate air through perforations in the leather trim to keep you cool even in the warmest conditions.

The Tachometer display changes to emphasize important information for each drive mode selected. For example, selecting Sport+ mode will change the colors of the display to red and white for added contrast.

I eagerly started the engine, set it to comfort mode and headed out into the city, marveling in the capsule of Japanese luxury that surrounded me.

The next morning, I set out bright and early with the video team, and we made our way south. On the highway, we tried out the 13-speaker, 915-watt Mark Levinson Surround Sound Audio System. I brought a few CDs specifically for this purpose. We started with Bryan Adams Unplugged because I thought the acoustic music and live audience would be interesting to experience on this system.

Mark Levinson worked alongside Lexus to create a dynamic sound stage uniquely fitted to the cabin. The system reproduces accurate tonal responses at every location in the cabin. It was as if we were sitting in the audience, and we could clearly make out the individual instruments in front of us. Further, this clarity and separation between instruments was consistent both at low and high volumes. Bryan seemed to be just a few feet away, sliding his fingers up and down the neck of his guitar as he played Cuts like a Knife. What an incredible thing, each time we turned the music on, that the Mark Levinson Audio System transported us to a different place, even if we were actually immobile and stuck in traffic behind a bus.

So far, the LC500 garnered top scores for comfort, luxury and an awesome sound system, but the driving experience didn’t excite. It just cruised, in a very quiet, very docile way.

However, I knew that under the hood was a fire-breathing 5.0 Liter, 471-horsepower, naturally aspirated V8 engine, which Lexus designed specifically for a more visceral driving experience. Lexus dedicated a team of acoustic engineers to tune both the intake and exhaust of said engine to guarantee that its sound would stir emotions. So once I found a stretch of open road, I set the car to Sport S+, set the transmission to manual and I was off.  With a wild roar, the LC500’s alter ego came out of the shadows, and it was a beast! At that point, my emotions were officially stirred.

I directed the LC500 through the flowing turns of the mountain. The power delivery was very linear and I found it easy to get the nose to tuck into a corner or straighten out by modulating the throttle. The 10-speed transmission responded quickly to my manual inputs whether shifting up or down. When I shifted to a lower gear before turns, the transmission automatically blipped the throttle and the exhaust issued a satisfying bark. It was fast, it had incredible grip, and it had me smiling from ear to ear.

The real beauty of this car is its dual personalities. Silent luxury cruiser or spine-tingling beast, you don’t have to choose, you can have both.

Once I understood the duality of the LC500, my initial opinion turned on its head. Over two days, I went from “This is very nice but its not exciting” to “My goodness this is very nice, but it is also an absolute beast! I want one!”

If you plan to test drive an LC500, take the time to peel away its layers. Take time to focus on the luxurious details. Then set the drive mode to Sport S+, start flipping those paddles, and let that V8 loose. You won’t be disappointed.