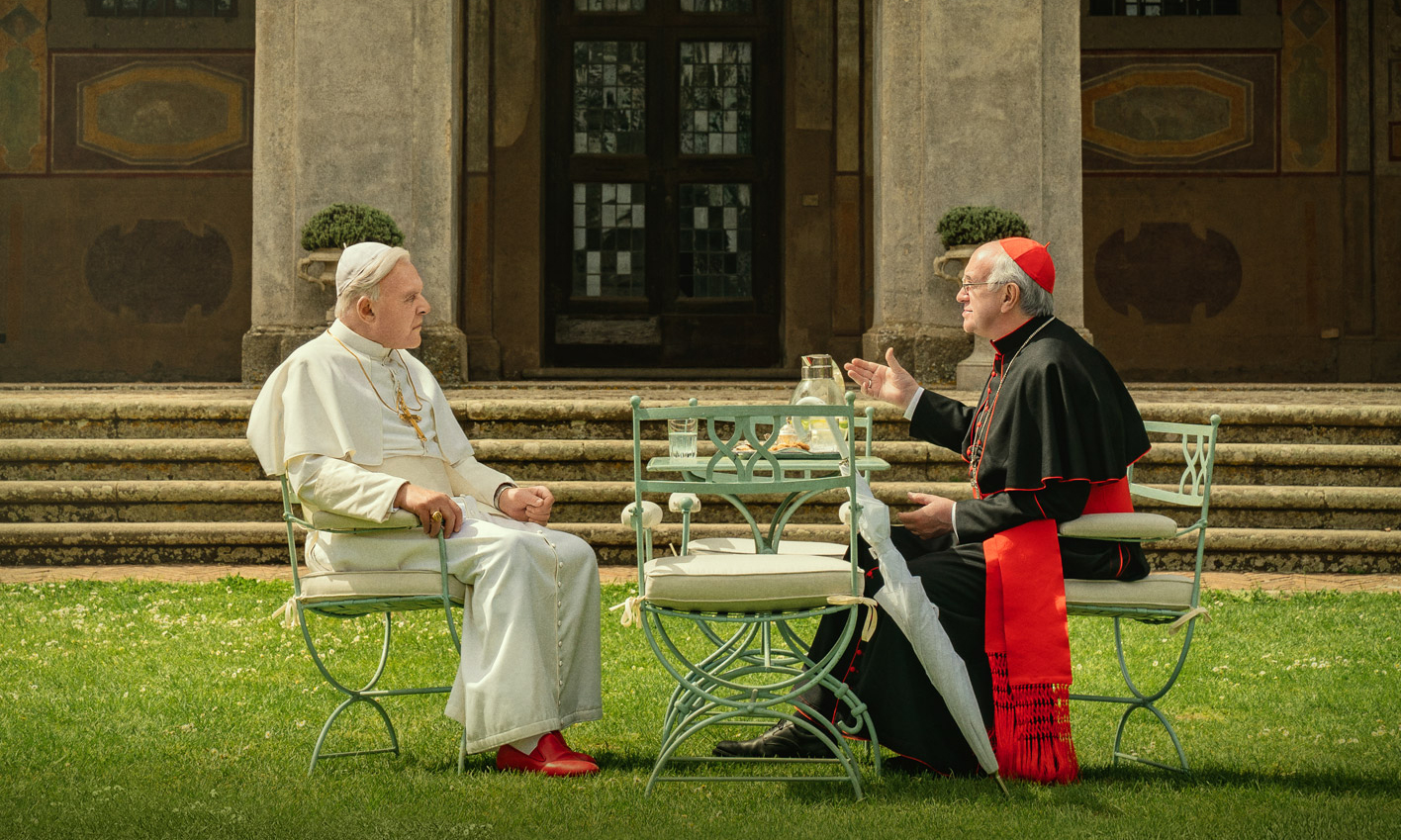 Doubt isn’t something Catholics expect from the Pope.

Two popes walk into a garden. It sounds like the set-up to a joke, but it’s also the premise of the Netflix film, “The Two Popes”, a comedy-drama biopic directed by Fernando Meirelles, and starring Anthony Hopkins and Johnathan Pryce. The film centers on the relationship of two men, Pope Benedict XVI and Cardinal Jorge Bergolio, or Pope Francis as he is known today.

A Film About Conflict

The source of conflict comes from Bergolio’s desire to retire as a cardinal, much to other’s displeasure, only for Benedict to inform him that he also wants to resign. The dilemma leaves both men comically–for their own reasons–upset at the other’s desire to step down from their positions.

At its very human core, it’s a wholesome story about two old men trying to figure out what to do with their lives. The unlikely friendship develops between Bergolio, a reformist, and Pope Benedict XVI, a staunch conservative. Their first few conversations are uneasy and heated arguments. While the latter sought to protect the Church by building a wall of doctrine around it, the former seeks to reform it and make it more welcoming.

It’s in their differences that the humor of the film is most present. There’s a funny sequence where Pope Benedict asks Bergolio what hymn he is whistling at the conclave–only for the other to reveal that it is in fact Dancing Queen by Abba.

The camera frames their conversations with uncomfortable closeups, making it seem like the two are unable to escape each other or their responsibilities. Unsteady handheld camera shots further illustrate the unease that these men find with each other. Their inability to relate with each other is further illustrated in their personal differences. The cinematography mimics that of a History Channel documentary, further reminding us of the truth the film is actually grounded on. It also really helps that Anthony Hopkins and Johnathan Pryce really look like the men they portray.

Of course, it’s a film and some liberties were taken when it comes to writing the script, but the story itself grounds itself on certain important truths about the Catholic Church.

My only qualm was that the film’s lighthearted and humorous tone dips towards the middle, when the story gets rather serious. Given the potential for funny moments, the film overall could’ve used more of the deadpan situational humor that got the people in my cinema laughing from time to time.

As the plot unfolds, their insecurities begin to unravel, putting them in an interesting position. Doubt isn’t something Catholics expect from the Pope.

In the film, we see Pope Benedict struggle with his own self-doubt and his inability to fulfill the responsibilities of his station. Anthony Hopkins executes a well-delivered monologue about how difficult it is to hear the voice of God. It is in this moment of vulnerability that Catholics need to see that their leader, in all his glory, is a human being like any single one of them.

Does this diminish his position? On the contrary, I believe that it it only elevates the faithful to realize that their deficiencies as people shouldn’t keep them from trying to be the best that they can be. For many Catholics, it’s normal to place their faith in idols, but what this film reminds us is that if those idols are just as human as we are, what stops us from being the grace God would have wanted for the world? It’s paradoxical that such a mindset would come from a religion whose entire central figure is remembered to be just as human and vulnerable as we are.

In the story, the pope commits an act of faith by allowing leadership to fall in the hands of a man he disagrees with, whose ideas he finds to be subversive and borderline blasphemy. Through his doubt, he accepts that he may be wrong and through faith, he accepts that his rival might be right.

Herein lies the hypocrisy to which many believers fall prey: They’re terrified of being wrong. They hate the idea that anything they believe in could possibly be a mistake–to the point of irrationality, to the point of judgement, to the exclusion of their fellows. In believing that they are God’s megaphones, they forget that they themselves are human and prone to error, and in forgetting that they are human, they forget to be human.

When a believer’s ‘faith’ leads them to say hurtful things to others or to even directly cause harm, or even to outright refuse to listen to and understand those who are different from them simply because they are threatened by that contradiction… Is that still faith? It looks to me like insecurity in its purest most debilitating form.

I would think true faith exists in accepting the possibility that even when one is mistaken or wrong about something, love and goodness can still win.

The film calls us to accept our humanity, to realize that we do not have all the answers and that we need to listen in order to learn.

My favorite scene in the film came when the two protagonists heard each other’s confessions. It was less about them being magically cleansed of their sins by a divine being, and more about two men listening to what weighed them down, then comforting one another over guilt felt for terrible things that they were responsible for.

Yes, the Catholic Church is run by a sinner, yet many Catholics choose to exclude others because they believe those people are the same. The Pope’s status as a sinner doesn’t diminish his position, but should be a reminder to those that follow him that anybody can be a force for good, even one with stained hands.

So, does this film answer the paradox? If the Pope is meant to be God’s mouthpiece, and two popes get into an argument, which one is God actually speaking through?

After watching, I think I agree with its answer: God can speak through us all. And no, that isn’t a reason to speak out as if with the voice of a deity; it’s a reason to listen.

The Two Popes starts streaming on Netflix on December 20, 2019.