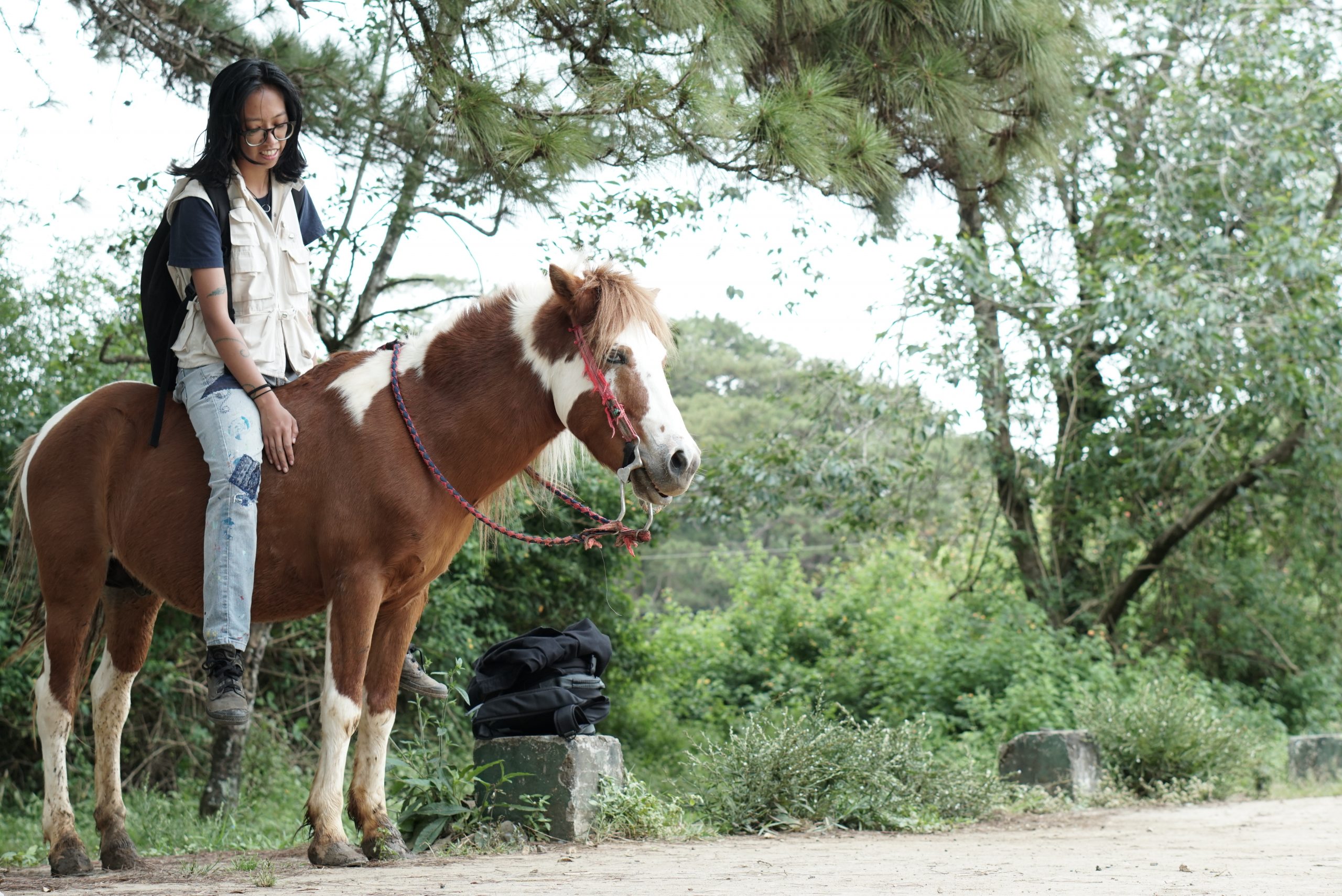 Solana Lim Perez seeks to make history as the first Filipina to take part in the Mongol Derby.

“Have you ever gone on a long trip, and then come home, opened the door to your room and took in a deep breath, and then let it out, slowly? It’s that feeling for me whenever I mount up into the saddle. Home is where the horse is.”

These are the words of Solana Lim Perez: a twenty-five year-old artist and equestrian from Baguio City, in the Philippines. Next year, Solana seeks to make history as the first Filipina to take part in the Mongol Derby. Known to equestrians as the “Toughest Race in the World”, the Mongol Derby has been challenging equestrians since 2009, when it was established as a tribute to the world’s first long-distance postal transmission route established by Genghis Khan in 1224.

Every year, riders from each corner of the world retrace the very same route that Genghis Khan’s messengers used to connect the world together. Riders are tasked to endure 1,000 kilometers of the harsh Mongolian countryside on a wild horse, with mounts changing during each 40km interval. Riders must rely completely on their own instincts and fortitude in order to survive and complete the derby.

Mistress of All Trades

At first glance, Solana Lim Perez doesn’t appear to be your typical adventurer. With her diminutive frame, Solana often resembles a spellbound, wandering artist. She is the kind of woman who can been seen swinging seamlessly from one medium of artistic expression to another. It’s not out of the ordinary to see her rushing between tasks, be it card reading, dressmaking, or creating murals for Bonifacio Global City or Café By The Ruins. If anything, Solana is a gypsy driven by whichever medium commands the attention of her spirit in that moment.

But even then, horseback riding has always been a key core of her identity. “I was put in the saddle before I could walk! It was most definitely something that I grew up believing to be a completely natural thing for me to do. In a way, I think that if you took the horseback riding part of my personality out of me, I wouldn’t be me at all.”

In many ways, Solana credits her love for riding to having been raised in the Cordillera Region of Northern Luzon, in the Philippines. The region’s distinct and iconic blend of several indigenous highland cultures, combined with Baguio City’s foundation as a mining town set-up by the Americans, created an environment that allowed people to learn how to ride in a very unique way.

“For sure if I grew up elsewhere where horses aren’t as easily accessible, I may not have taken to it as keenly as I have,” Solana shares. “In other places horseback riding is approached from a totally different angle [compared to] how things are done here. There’s so much formality, where you have to go through lessons, pick a discipline to train in. In Baguio, because the horses are a tourist attraction, certain things get pared down for practicality, and when you grow up around the pony boys, it eventually becomes a ‘get on and go’ kind of thing.”

“What’s great about the whole informality of it, is when I was a kid, getting on a horse suddenly meant free rein over certain parts of the city,” Solana adds. “We (my friends, some family) would gallop on the road, ride out in all kinds of bad weather, and carve our own trails over the mountains skirting the edges of the city.”

And in the very spirit of the region’s fusion of indigenous and cowboy cultures, Solana developed an unparalleled thirst for adventure–one that inspired her to sign up for the 2020 Mongol Derby.

“I guess having that influence also appealed to me, because it meant that being able to ride ‘wild’ horses was a point to be admired, and having a thirst for adventure and looking for new places to roam on horseback was very much encouraged.”

The Toughest Race in the World

After having spent the last several years struggling as a freelance artist and fighting mental illness, Solana decided to enter the Mongol Derby on a lark. And much to her surprise, she was chosen to be part of the race’s 2020 roster of participants–a group of riders who seek nothing more than to establish themselves among the ranks of the world’s best.

In Baguio, because the horses are a tourist attraction, certain things get pared down for practicality, and when you grow up around the pony boys, it eventually becomes a ‘get on and go’ kind of thing.

“It’s the ultimate test for me, like all my years of riding are culminating into this one big thing. Aside from that, it’s also becoming a way for me to push myself in other areas of my life,” Solana says. “Prior to training for the Derby, I was mainly spending my time as a freelance visual artist. Physical fitness took a backseat in favor of hunting down the next job, selling my existing works, maintaining my mental health, and the never-ending search for new sources of inspiration. Now that I’m training, and spending more and more time in the saddle, I find that the inspiration to create art and try out different styles has been more present during my free time. This is a great side-effect considering I need to use my art now more than ever to raise funds for my training, equipment, not to mention the hefty entrance fee to the race.”

Solana has not allowed the magnitude of the trip itself to deter her from her main goal of ensuring she is physically and emotionally capable of finishing the Mongol Derby.

At the start of every derby, riders are equipped with a GPS device and a half-wild horse, which will be routinely changed every 40km. In addition, riders are only allowed to carry 5kg of equipment on their saddlebag. How they travel the unfamiliar Mongolian countryside is entirely up to the riders themselves. Not only are they vulnerable to the new terrain, they have to learn how to manage the unpredictable temperament of the half-wild Mongolian horse. Riders being thrown off their steeds and abandoned in the wilderness, that’s a sight commonly seen throughout the Mongol Derby.

“When they’re not working, these horses are grazing in herds and pretty much fending for themselves with relatively little human interference,” Solana explains. “I could end up with all sorts of different horses during the race, from eager-to-please ones, to absolutely rebellious.”

Each horse is required to undergo a routine physical examination at each stop. And while these horses possess incredible endurance, any physical issues could leave riders penalized by several hours; meaning, they would lose valuable time before they are given their next horse and allowed to ride on. Simply riding from start to finish can be impossible when all these variables are factored in.

Understanding the challenges awaiting her, Solana resigned herself to intense training. “I’m starting with what I know, and moving forward from that. So far that means doing some workouts to build up strength that I’ve been missing out on, and aside from that, spending a lot of time on horseback.”

Solana’s training begins at sunrise when she takes a horse through the trails of Camp John Hay in order to build-up her endurance. But even then, Solana acknowledges that she still has a long way to go.

“At some point I’m going to have to go through outdoor and survival training, as well as learning how to navigate by GPS. I’m planning on going on a camping trip with horses,” Solana shares. “For now though, I’m sleeping on the floor of my room without a mattress to get myself used to sleeping on hard ground. It sounds silly, but I thought it would be a good thing to get used to the little discomforts that I’ll have to be dealing with during the race itself.”

The First Filipina in the Mongol Derby

In the summer of 2020, Solana Lim Perez is poised to make history as the first Filipina to join the Mongol Derby. While the thought of riding with the weight of an entire country can be rather intimidating, as far as Solana is concerned, her standing as the first Filipina entrant was more of an afterthought than anything else. “When I first signed up for the race and began the process of applying, I didn’t think too much of it. I was just telling myself, ‘Cool, I’m gonna do this thing just to prove that I can do the thing!’”

The subject of being the first Filipina in the race didn’t occur to Solana until was brought up by Mongol Derby organizer, Erik Cooper. “It just hit me in some strange ways, the fact that no one from the Philippines has ever attempted this before. It’s intimidating, because all of a sudden I feel like the stakes are a bit higher now, and I’m not just joining the race for myself anymore.”

Despite the sudden weight of an entire country on her saddle, Solana remains unwavering and undaunted as she continues with her preparation for the Mongol Derby. “Knowing that people know this about me joining the Derby, it gives me a different feeling of obligation and responsibility towards my preparations for the race.”

Given her freewheeling approach to the many facets of her life, it can be easy for anyone to pin their expectations on Solana. Regardless of background or profession, athlete or artist, it’s only natural to want to succeed vicariously through her efforts next year. And this is something Solana has begun to come to terms with.

“For now though, I’m sleeping on the floor of my room without a mattress to get myself used to sleeping on hard ground. It sounds silly, but I thought it would be a good thing to get used to the little discomforts that I’ll have to be dealing with during the race itself.”

“One thing that’s kind of been a recurring thought to me when I reflect on this role I’ve taken on is that, we Filipinas shouldn’t be content with being told what to do. Our dreams and passions matter. And yet at the same time, we have to take it upon ourselves to approach our pursuits and ambitions with a level of discipline and responsibility, as well as creativeness.”

However, now more than ever, Solana is aware of what the weight of her journey through Mongolia could possibly mean to future generations of Filipinas. And because of this, she has grounded herself to understand that when the race begins, she riding and surviving to empower women, such as herself and the many who’ve inspired her, with the notion that no matter how impossible any obstacle is, with a little honesty, anything is possible.

“Now I know I speak from a position of privilege and quite possibly idealism that makes it easy for me to say these things,” Solana admits. “But one of the things I’m trying to get at is that the little things women do—especially when they do it for themselves, from a place of truth rather than selfishness— and the way they do it, it ripples outward and can shape their lives and ultimately the lives of others. The little things matter, and if you do it right, someday the opportunity will come to turn these little things into big things.”If you are interested in supporting Solana, visit GoGetFunding to learn more.